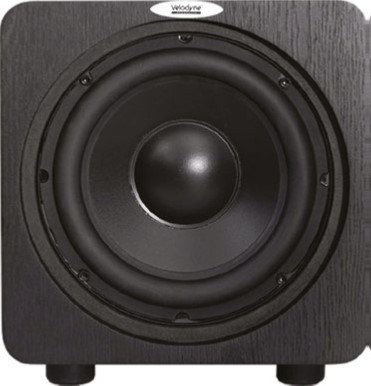 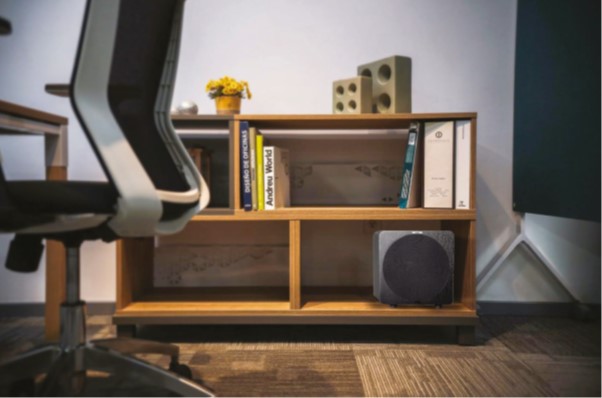 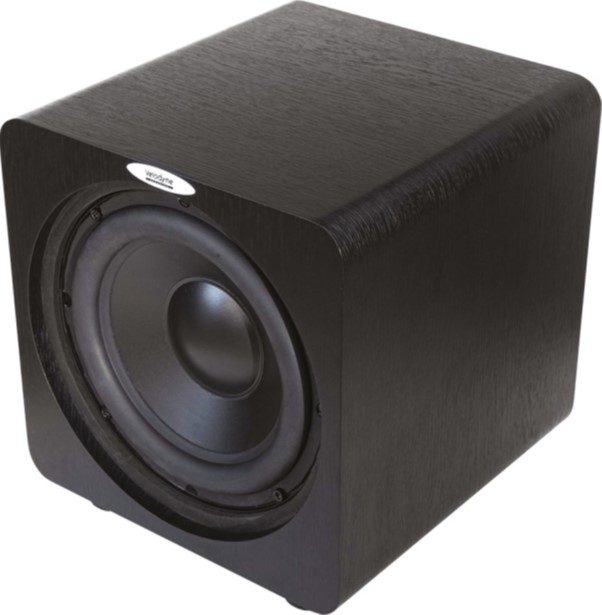 Reviews return to EI as our trade focused reviewer Richard Stevenson puts the Velodyne DB8 subwoofer through its paces at our specially constructed testing facility.

Freestanding subwoofers are rarely svelte of dimension, so integrating them into a clean home theatre design without disrupting the décor presents a serious challenge. None more so than when space is tight, such as apartments, flats and those ambitious single garage conversions. Velodyne’s new and ultra-compact Deep Blue 8 aims to be the solution of choice for these tricky installs, while offering ‘low frequency with the elemental force of the sea’. No, we are none the wiser about that strapline either, but the DB8 is the smallest in the series, with the line-up topping out at a mighty 15in driver model. The Velodyne DB8 is small, I mean really small. Side by side with go-to 10in or 12in driver subs from most brands, the DB8 looks positively diminutive.

Comfortably under a foot cube, the baffle is only marginally larger than the driver chassis. The cabinet is heavily radiused on the side horizontals to give it a smoother appearance and allow a seamless wrap of low-sheen brush-textured vinyl – in the obligatory black only. That understated finish has a couple of nice flourishes, including a neat Velodyne badge and a round, driver-sized grille. This sits in a recess flush with the baffle so looks very sleek when installed. Removing the grille is assisted by a small fabric tag on the perimeter, although it does upset the smooth lines of the DB8 if you look close enough. If the grill was likely to stay put, we would risk removing the tag or folding it inside the recess for neatness. The aesthetic is complete with four round, fixed rubber feet. These offer a little give on uneven surfaces and enough traction to stop the DB8 from walking across smooth floors.

The sealed box design is a very ambitious move on Velodyne’s part. It is notoriously tricky to get low-frequency bass extension or decent SPLs from small, sealed enclosures. That is made even trickier here as the heavyweight MDF cabinet has internal bracing and a whopping 52mm thick baffle, both taking up vital air space. The benefit of the sealed enclosure is it offers a smoother response across the LF spectrum and avoids audible port ‘chuff’ at high SPLs. Small subs are inherently prone to the latter, ostensibly due to increased air speed at the port due to reduced compressibility of the very small air volume. The DB8’s business-end credentials include an 8in, long-throw/high excursion driver with a polypropylene cone, dual ferrite magnets and a robust 2in voicecoil assembly. This is driven by a class A/B 300W RMS amp promising up to 800W dynamic power for sudden peaks. The filter network is a typical 12dB/Octave low pass crossover with a variable 50-180Hz roll-off, user selectable via a rotary dial on the rear panel. This dial is joined by a matching subwoofer and, more unusually at this price, a rotary 0-180° variable phase control knob.

Connectivity is up there with the most compact, affordable competitors, including L/R analogue inputs and LFE input RCAs, alongside LFE loop output for daisy-chaining multiple subs. All the RCA terminals are robust feeling and gold plated. The cheap-feeling spring clips for high-level connection let the perceived quality down a little, but other subs at this price often evict them all together. Other than an on/off/auto power switch, that is it for controls; no remote, EQ system or app. While Velodyne is best known for pushing the boundaries of digital tech for subs, the DB8 is a basic sub at an attractive price, easy to conceal and designed to deliver a solid LF punch without the fuss and faff.

Set up and installation is therefore simple, with the crossover frequency in multichannel set-ups best set to maximum on the sub control and left to the bass management in the AVR. Room positioning is a gift. Not only is the DB8 supremely easy to lift, move and hide away unobtrusively, the sealed design makes it a little less sensitive to room placement than a typical ported design. That allowed us to go for the prime front corner spot in the room and benefit from an additional 6dB or so of LF boundary gain. In action with a selection of movies, the Deep Blue 8 punches fast and tight, and fights well above its weight. This is a sub that surprises with its pace and tautness, and delivers much higher sound pressure in the room than its compact dimensions would suggest.

This is not a sub to get your flares flapping to the stomp of the T-Rex in Jurassic Park, but it delivers explosions, gunshots and car crashes with visceral impact and little sign of strain. The feat of engineering to get a sub this small sounding this dynamic is not to be underestimated. From an installer’s point of view, this is a very affordable sub, easy to hide with plenty of impact – perhaps the holy trinity of subwoofer features for most customers.

The small size and sealed design make room placement very easy, opening up the option of multiple DB8 subs in the system to further smooth the in-room LF response and up the SPL ante. The inclusion of the high-level terminals, even if basic, does also offer the option of adding a DB8 to the dialogue channel to increase the LF timbre of voices. This is a very flexible, compact and discreet sub with all sorts of small bass-reinforcements uses. To roll with Velodyne’s ‘elemental force of the sea’ theme, the larger Deep Blue subs may well plumb the oceanic depths of sub-sonic bass, but the little DB8 is more of an inshore vessel; compact, fast and punchy, with good speed and manoeuvrability, rather than particularly deep. In fact, given its affordable price tag, installation flexibility and outstanding performance, we could think of far more accurate words to expand upon the ‘DB’ of its DB8 moniker.

The Velodyne DB8 is available from UK distributor Redline.