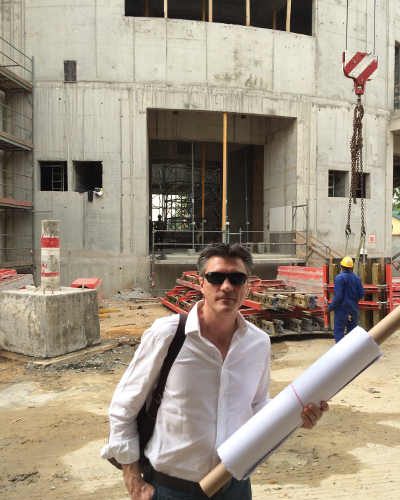 By the late 90’s he had left the army and built a career in property construction, however Malcolm could see by the early 2000’s there was a need to specialise.

In 2005 Kensington Home Technology (KHT) was established with two partners.

“I said I would rather play golf than take on projects that would not make us money, so I made the decision not to change our pricing”

Another change came in 2011 when the original team behind KHT wanted to focus on differing approaches and so Kensington Audio Visual was born.

Malcolm explains: “In the early days, we were not necessarily all about automation, we just wanted to make sure our clients’ homes were properly equipped with good data access, Wi-Fi, broadband and entertainment services.

“As automation platforms, centralised AV distribution and LED based lighting systems have become more accessible and better value, we have added more functionality. However we are careful to never over-specify.”

Malcolm adds: “I don’t really like the term ‘smart home’, it sounds too much like toys for the boys. What we deliver are common sense services that the modern property should have, adding not just functionality, but value.”

Keeping the customer interface simple to use and really listening to what clients wanted, enabled the company to grow with significant Crestron projects coming relatively early in the life of the firm.

However, just as the company was hitting its stride, the 2008 recession hit.

Malcolm took some brave decisions: “This period was tough for everyone, however, we had established ourselves and I was not going to devalue what we had built to get work. I had got some golf clubs for Christmas a while back and had hardly used them.

“I bought them into the office and said I would rather play golf than take on projects that would not make us money, so I made the decision not to change our pricing.

“Not reducing our prices definitely cost us work, but we had built enough of a customer base to still do well and customers appreciated that we were here for the long haul and still saw the value in the trust we had established. Happily the clubs stayed mostly unused.”

Working exclusively with private clients on single dwelling properties gives the company a close relationship with its customers and something that Malcolm tries to maintain even with some of the company’s wealthiest clients who often use an intermediary.

“Even with experienced people, things can get lost in translation or just by the mechanics of working through someone else. Where possible, getting face time with the customer is a huge help. Understanding the person and their lifestyle always ends in a better project and a happier customer.”

Malcolm explains: “What our customers are looking for is reliability and credibility, my background in property construction means I understand what goes into a property perhaps more than some AV focused guys. Being able to talk intelligently about what we provide fits into the rest of the project does give us an advantage.”

The company employs a range of automation systems, but has used Crestron for the longest.

Malcolm explains: “In our opinion Crestron has always been at the cutting-edge. We appreciate how the company creates a whole eco system and provides everything you need to deliver a top class project. When it’s the very best the client needs, then this is our system of choice. However we do use Control4 and Savant.

“When the project is not one of our larger ones and less personalisation is needed, Control4 is a good option. Savant is different in that it’s often the system we get asked for from a client. Technically it’s good and people like the bespoke room image interfaces that can be created.”

Crestron is the system which will be going into one of the largest projects the company has ever take on, a 66,000sq ft property currently under construction.

If this does not seem daunting enough, add into the mix that the property is located in Lagos, Nigeria and the project goes to another level.

Malcolm explains: “We have seven projects currently under way for the same family who are based in Lagos. To operate in Lagos is an extremely difficult proposition. You need to have a sponsor from the country, you need to have an office there and you need proper security.

“It all started after we did a project for a Nigerian client in London who needed some work done back home and we got our start from there. The scale of some of the projects and the level some of the customers want to go to make it an exciting market.

“However, you also have to learn your way around the bureaucracy, the city has as many as 22 power cuts a day and the traffic is unbelievable. However, get around all of this and the rewards can be high.”

West Africa is not the only overseas area the company operates in. With work completed in Doha, capital of Qatar, Malcolm also regularly works as a consultant for customers in Italy, Spain, Ibiza, France and the USA.

A solutions based company, the kit if of course important, but the company’s most valuable assets are its people.

Malcolm says: “In this market, often the only thing that differentiates you from another company is the people. We tend to recruit from outside the CI/AV world as we have certain ways we like things done and it’s easier to instil those approaches if people are coming to the industry with an open mind. We also have staff that speak more than one language which gives us a communications advantage.

“Training is a massive part of our success. By its nature what you need to know in this industry is always changing. It’s expensive, but if you are not regularly training, you are not where you need to be in terms of knowledge.”

The company’s offices are also a valuable asset containing a showroom offering an insight into what customers can expect. Within easy reach are also the Crestron and Savant experience centres in London, meaning clients can get a good overview in a short space of time.

A company that has managed to build a strong reputation in the London high-end property market must have a view on working with other specialists.

Malcom says: “Ultimately, you have to understand and accept that the client probably cares more about what the property looks like than how good the audio is in the kitchen. If you have something like a dedicated cinema, then sure fight your corner for how things need to be done, but for the rest of the property, my advice is to understand the priorities of the client.”

With home automation more in the news these days, how does Malcolm see the market changing?

“The movement is in the middle and entry sectors where multi-room AV and basic automation are now more affordable. Switched-on builders and electricians are already spotting this and more will move into providing this. This may force more installers into the high-end, making it more competitive, however we are confident our experience and approach will continue to serve us well.”

Best show home in the UK?

AMX makes it in Merchant Square