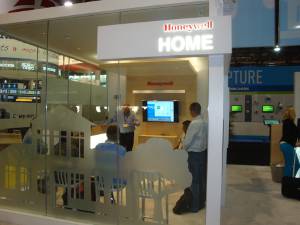 For the first time, dealers actually got a chance to interact with the new Honeywell Lyric home security system with voice control at ISC West 2015.

Lyric has a sexy female voice, which makes “her” nice to talk to (I guess). The system responds to voice commands based on personalised presets. For example, users can disarm the system simply by saying: “Hello Lyric, I’m home!” which could also switch on the lights and adjust the temperature to your preferred setting.

The Lyric family of products features a touchscreen controller, cameras, motion, smoke and motion detectors, while also integrating with a range of home automation products, such as connected thermostats, lighting, shade and lock controls. Using a smartphone location, the Lyric thermostat knows when a homeowner leaves and when he or she is heading home to adjust the temperature accordingly.