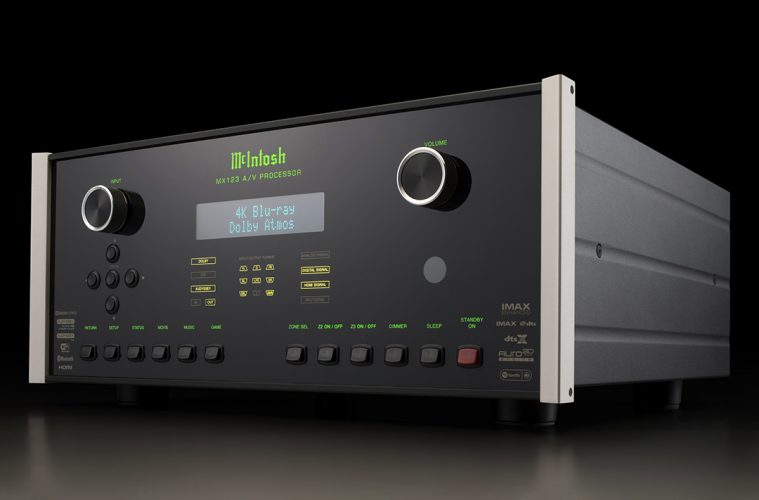 Audio Return Channel (ARC) capabilities are featured on three of the outputs, while the fourth features Enhanced Audio Return Channel (eARC) functionality, offering improved bandwidth so higher resolution audio can be sent from the TV to the MX170 to deliver the best sound quality possible.

HDR10, Dolby Vision and HLG are fully supported by the MX170, and a special HDBaseT output is included to prevent signal loss or degradation when there is a long distance between the MX170 and the screen.

On the audio side, the new MX170 is compatible with Dolby Atmos, DTS:X and Auro-3D, and includes RoomPerfect room correction technology that will measure and adjust the audio output to compensate for the specific acoustic properties of the room. The MX170 combined with RoomPerfect is designed to produce a home theatre surround sound system with optimised frequency response, calibrated speaker volumes, and bass control that perfectly combines the speakers with the subwoofer(s). Added flexibility in speaker selection and placement is another benefit.

The MX170 features balanced outputs for a 15.1 surround sound speaker configuration, and comes with a full suite of digital inputs including four optical, three coaxial and one USB that each accept up to 24-bit/192kHz signals, plus one digital balanced input.

There’s also a complete complement of analogue audio inputs onboard, comprised of two balanced and four unbalanced inputs, a phono input and a 7.1 multichannel unbalanced input. It features some of the latest analogue to digital convertor technology in order to maximise the audio quality of analogue sources.

All analogue and digital devices can be custom named to simplify system operation; their volume levels can be matched to eliminate jarring changes in volume when transitioning between sources, while bass and treble controls offer further audio fine-tuning.

The MX170 takes advantage of the latest advancements in processing power to run cooler, and can be paired with a variety of amplifiers and speakers.

The MX123 features upgraded digital audio processing capabilities that results in two more discrete audio channels, bringing the MX123 to 13.2 discrete audio channels compared to 11.2 channels in the previous model. These 13.2 discrete channels are available via both balanced and unbalanced audio outputs that can be used in a variety of home theatre speaker configurations; two additional unbalanced outputs offer further connection flexibility. DSD and ALAC playback support have been doubled to DSD128 and ALAC 192kHz for better high resolution audio performance.

For video, the MX123 has seven HDMI inputs and three HDMI outputs. All HDMI inputs and outputs are HDCP 2.3. They all also have 18Gbps of bandwidth to support High Dynamic Range formats Dolby Vision, HDR10 and HLG, 4K Ultra HD at 50/60Hz; 4:4:4 colour spacing, Rec. 2020 and 3D video pass-through. Enhanced Audio Return Channel (eARC) functionality is included on one of the HDMI outputs.

A notable new feature on the MX123 is the inclusion of IMAX Enhanced –  a set of stringent performance standards established by IMAX and DTS to create a consistent and higher bar for image and sound performance on premium devices. It utilises a sophisticated, advanced algorithm designed to produce the highest-quality, sharpest 4K HDR images.

Streaming options on the MX123 have been upgraded from the previous model. The MX123 now includes Apple AirPlay 2 along with Bluetooth and Spotify Connect for easy streaming from mobile devices. TuneIn is also included for further music streaming options. To assist with streaming performance and reliability, wireless connectivity has been improved to include 2.4/5GHz dual band support.

Audyssey MultEQ XT32 is included and will calibrate the MX123 to a home theater’s unique acoustical properties, letting it deliver the clearest and most balanced sound possible. Each discrete audio channel has its own 32-bit premium Digital-to-Analogue Converter to produce the best audio quality. Bass and treble tone controls plus a nine-band equaliser offer additional fine-tuning, while the MX123 also has the flexibility to create two additional zones and send select audio and/or video to each zone. The MX123 can be paired with a variety of home theatre amplifiers and speakers.

The MC255 features McIntosh’s new TripleView Power Output Meter that independently indicates the real time power reading of the amplifier’s three front channels. Instead of three separate metre windows, the easy-to-read, 15” (38 cm) wide TripleView features three of McIntosh’s traditional mechanical metres in a single meter enclosure. While a totally new design, each of the three peak responding pointers in the TripleView metre have the same motion that McIntosh metres are known for. The glow of the TripleView meter and trademarked blue lighting can be turned off so as not to compete with the TV or movie screen.

Filter capacity has been increased by 50% which has reportedly more than doubled dynamic headroom from 1.7dB to 3.6dB. When using just the front left, centre and right channels, power output has been increased by 25% from 200 Watts per channel (WPC) to 250 WPC. When using all five channels, each will receive 200 WPC. Regardless of how many channels are used, the full 200 or 250 Watts is delivered to either 4 or 8 Ohm speakers via McIntosh’s Dynamic Power Manager (DPM) technology.

The MC255 runs cool and quiet thanks to four of McIntosh’s Monogrammed Heatsinks which are connected to high current output transistors, while a quiet, specially wound toroidal isolation power transformer also helps keep noise to a minimum. McIntosh’s eco-friendly power management system turns the amplifier off after a set amount of time when no input signal has been detected.

While the MC255 has received many upgrades, it also comes with hallmark McIntosh technologies such as Power Guard that prevents potential speaker damage caused by clipping and over-driving of the amplifier, and Sentry Monitor that protects against short-circuits by disengaging the output stage should the current ever exceed safe operating levels (it then resets automatically when operating conditions return to normal). Both balanced and unbalanced inputs are included to connect the MC255 to the rest of the home theatre system.

The MC255 can be used to power a conventional five-channel home theater, it can be paired with either McIntosh’s MI128 eight-channel or MI254 four-channel digital amplifiers in home theatres that have additional surround sound speakers for use with object-based 3D audio formats such as Dolby Atmos, DTS:X and Auro-3D, or it can be used in a two zone configuration with the three front channels used at 250 WPC in one zone and the two surround sound channels used at 200 WPC in a second audio zone.

Orders for the MX170, MX123 and MC25 can now be placed with Authorised McIntosh dealers with shipping expected to begin to the United States in October 2019 and the rest of the world shortly thereafter.