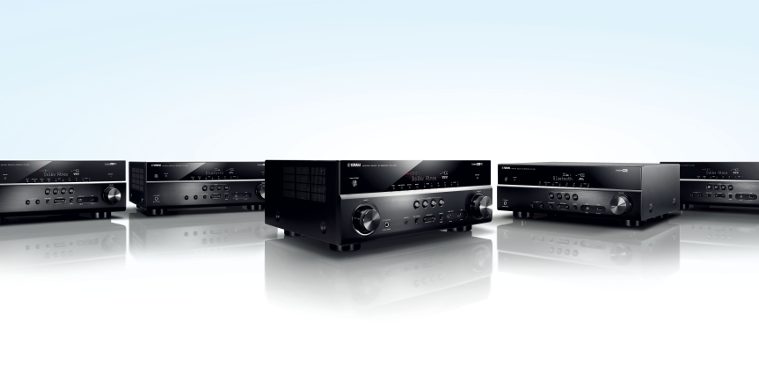 Yamaha has welcomed the newest members into its home cinema family: the RXV AV receivers – dubbed the ‘RX-V81 series – comprise five models which are due to start shipping in April 2016.

Each model will feature Bluetooth and the latest HDCP 2.2 protection, 4:4:4 support and 4k/60p pass-through as well as support for HDR, BT.2020 pass-through and every networked model featuring Yamaha’s multi-room system – MusicCast.

With MusicCast, a user can stream music around the home, but more importantly, stream any source from any compatible device to any other compatible device. (Think vinyl connected to HiFi being streamed to a wireless speaker, or sports from a TV and soundbar being sent to a micro system in another room.)

Starting with the RX-V381, this is a 5.1 AV receiver with Bluetooth. Combined with Yamaha’s compressed music enhancer, the manufacturer intends for this product to be used to listen to music in a home cinema environment with a simple connection at what it calls a ‘superb price’.

Noteworthy features include auto speaker calibration and the inclusion of Yamaha’s Extra Bass and CinemaDSP.

Next is the RX-V481 5.2 AV receiver, which boasts networking support and naturally, MusicCast support.

All of the inputs and sources means that the RX-V481 can be streamed across a home network to other MusicCast products such as wireless speakers, soundbars, micro systems or even a HiFi system.

If the user already owns a Bluetooth speaker or pair of Bluetooth headphones, these can also be used within a multi-room network.

There is limited information available on this model thus far, although it will be available as an alternative model to the RX-V481, only with the addition of DAB radio for £50 more.

The manufacturer insists that the biggest benefit of using a Yamaha AV receiver with Atmos is that CinemaDSP modes can be used to a high level with extra speakers, meaning that all the content that isn’t in Atmos or DTS:X can be utilised as well.

Some higher end features start to creep in with the RX-V681 7.2 channel AV receiver. Customers investing in the product can expect to see a more flexible Zone 2, which can intelligently switch between an Atmos setup and a set of external speakers based on what the user is listening to.

There’s also an MM phono stage on board which means with MusicCast the user can distribute their favourite records to their home network using an App.

At the top of the line-up sits the RX-V781 7.2 channel AV receiver, including a second HDMI output for a projector/TV setup and a full aluminium front panel. This is the highest quality RX-V money can buy without going into high-end Yamaha Aventage AV receiver territory.

The YPAO auto calibration is a higher level here, boasting an upgraded multi-point measurement and an increased power rating over the RX-V681.

There’s also upgraded components to be found inside in addition to what the manufacturer calls ‘a much more refined sound quality,’ which it attributes to the overall improved build quality.