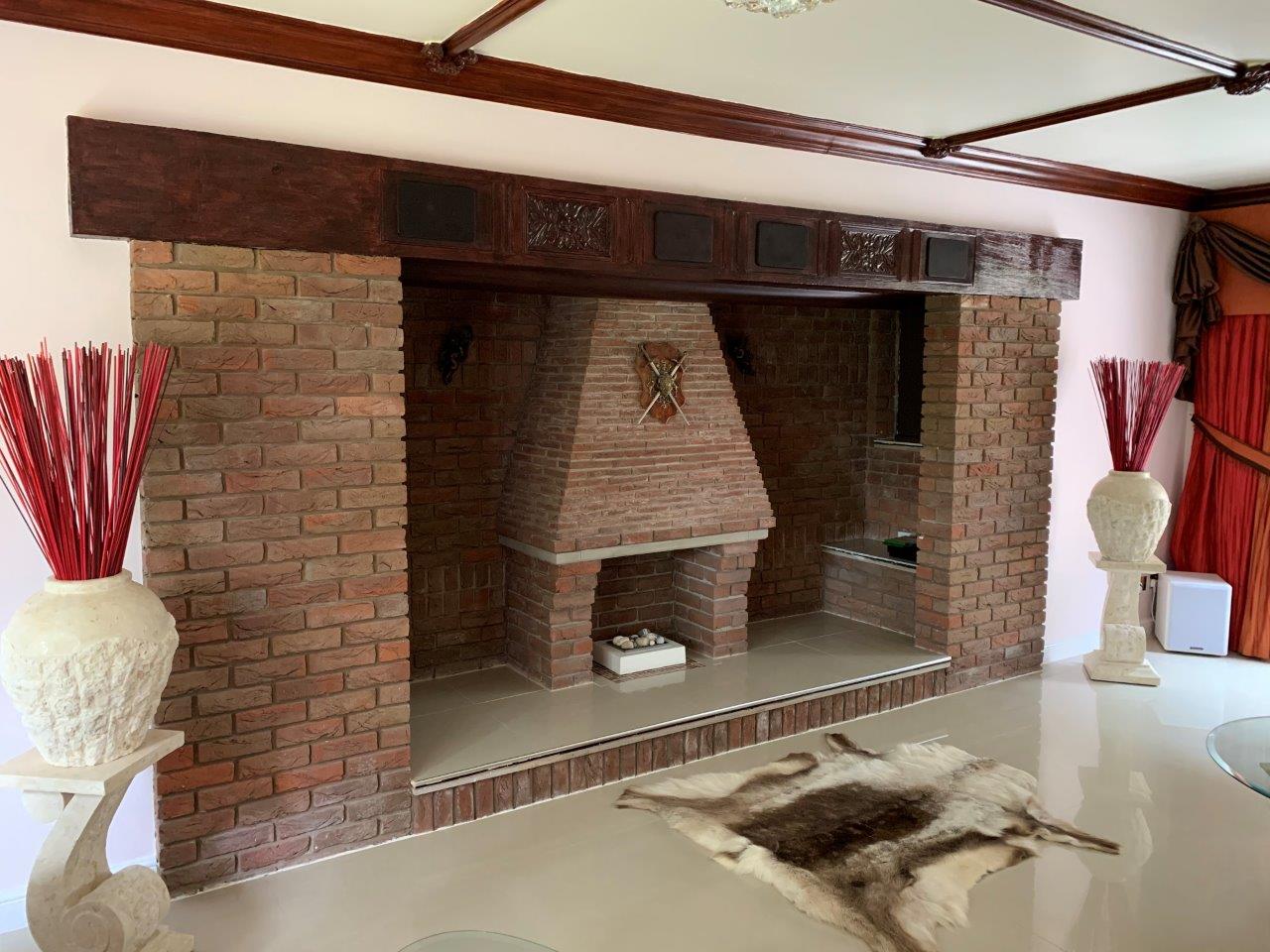 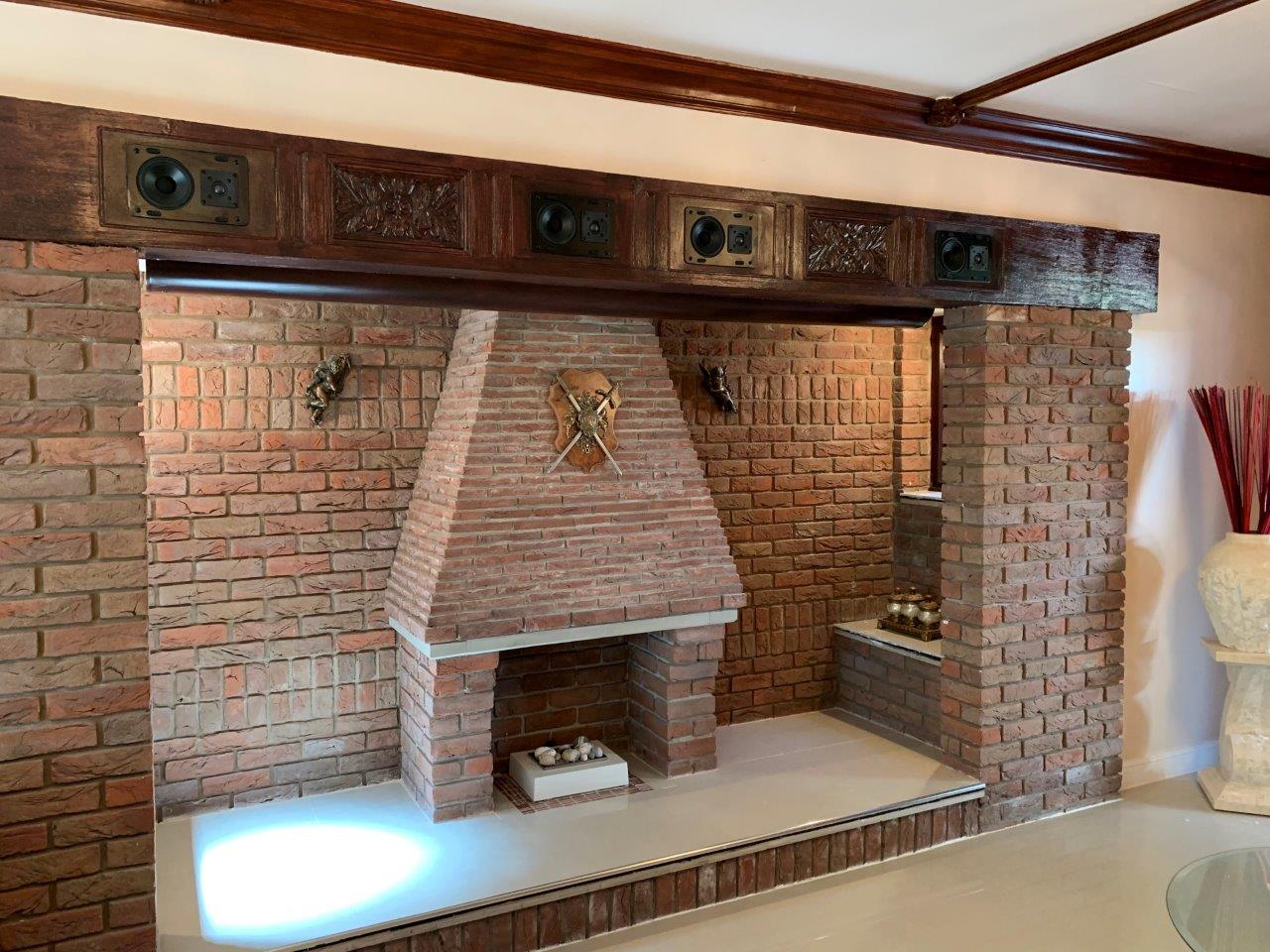 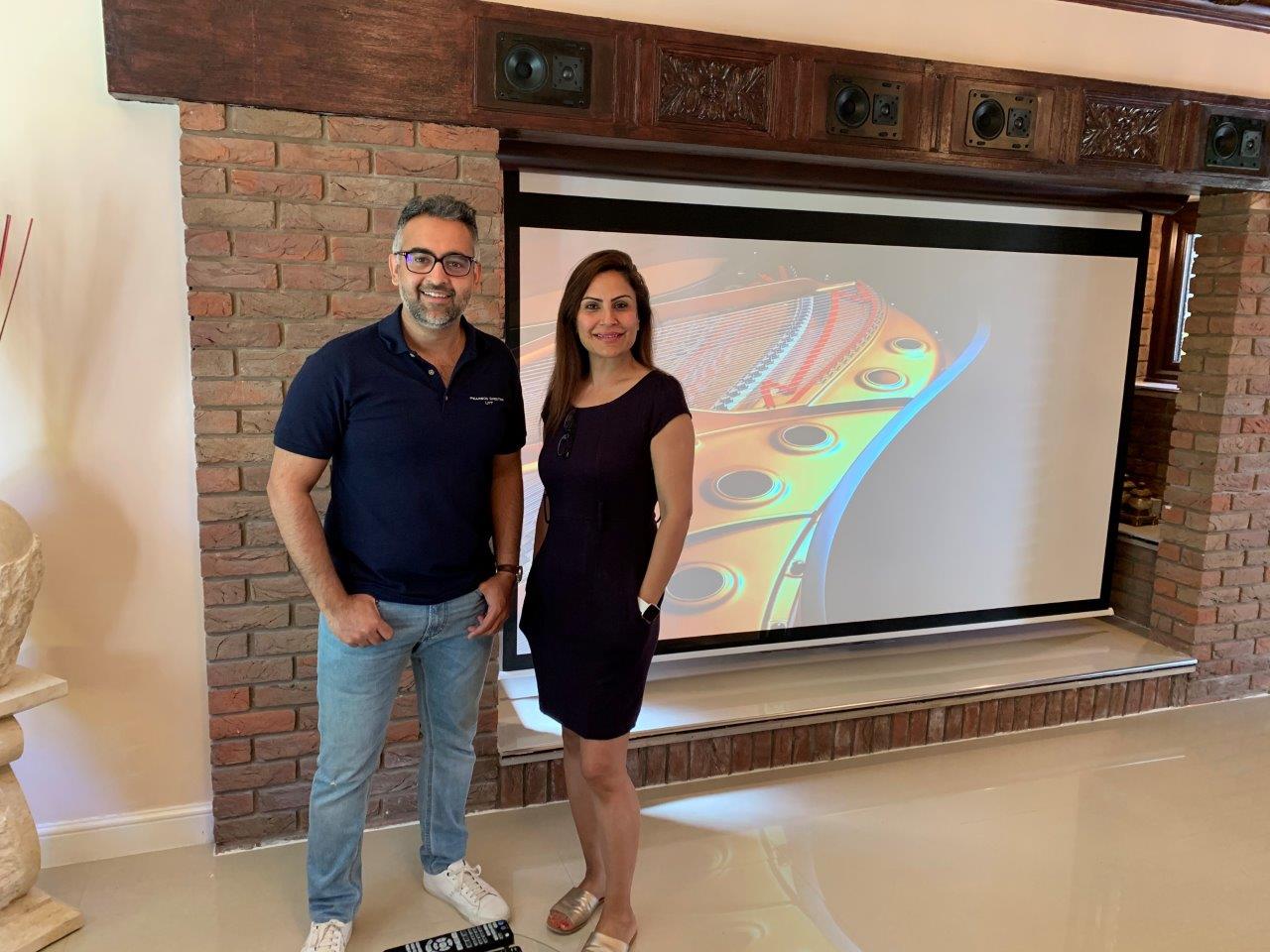 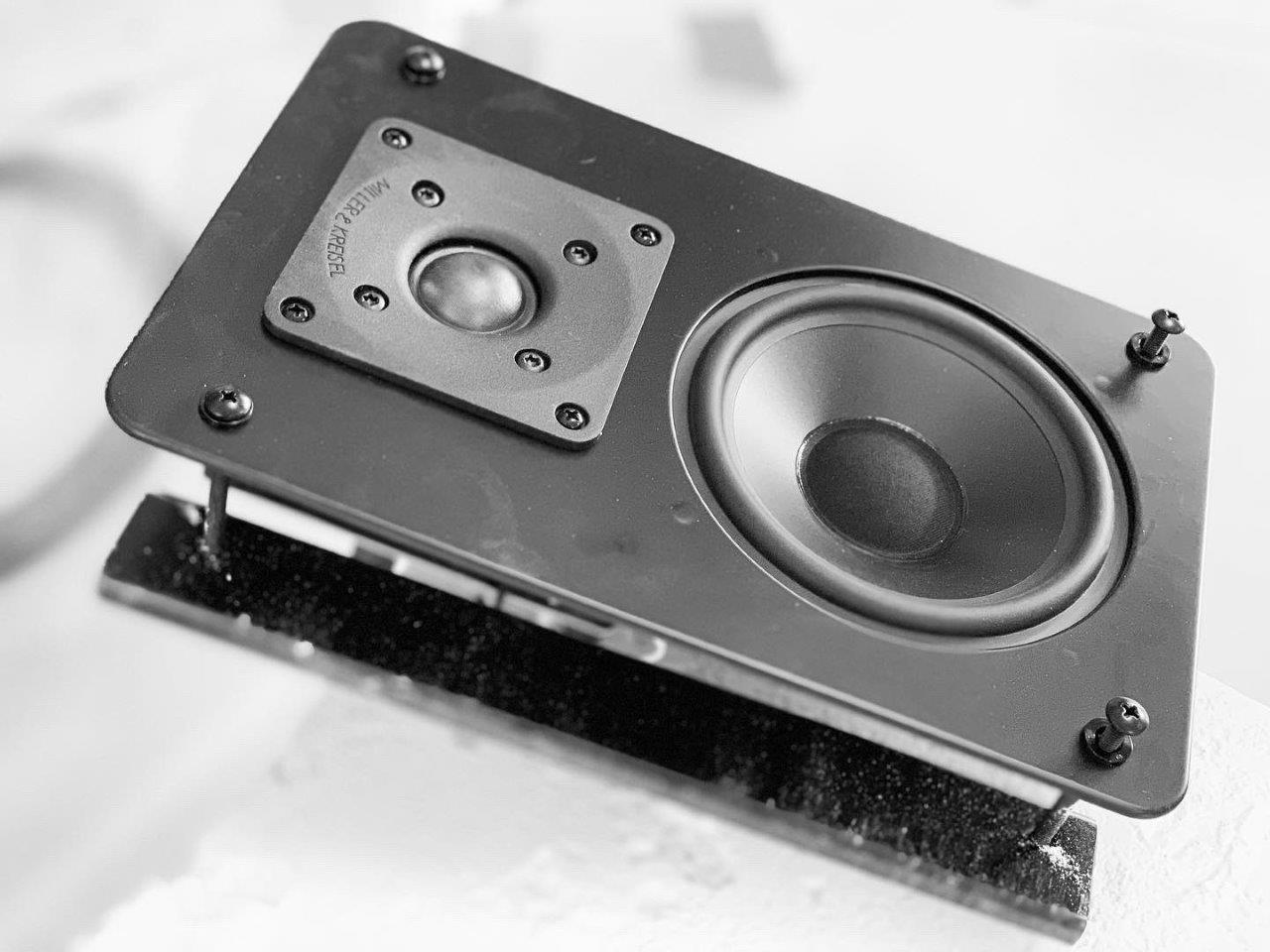 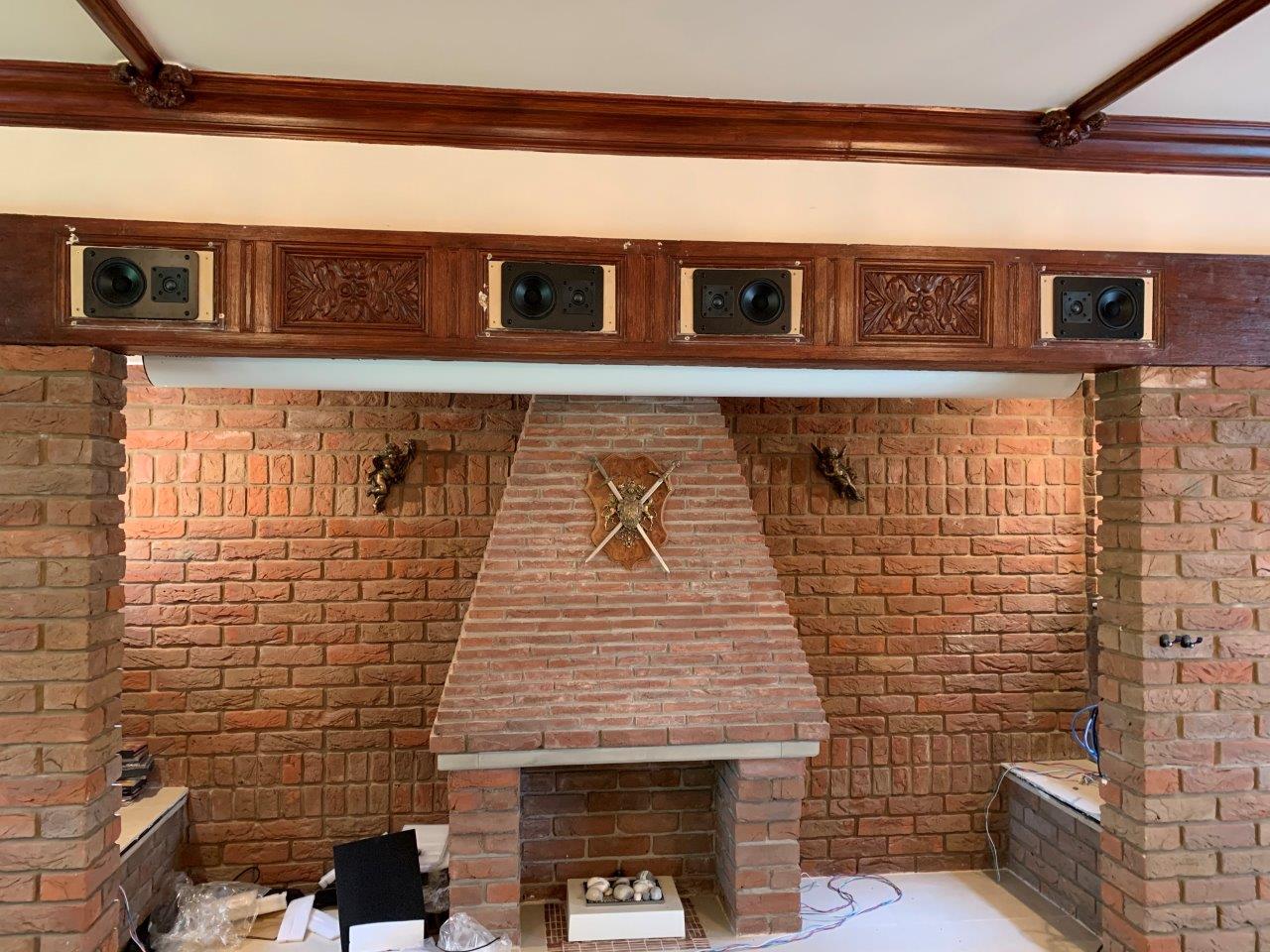 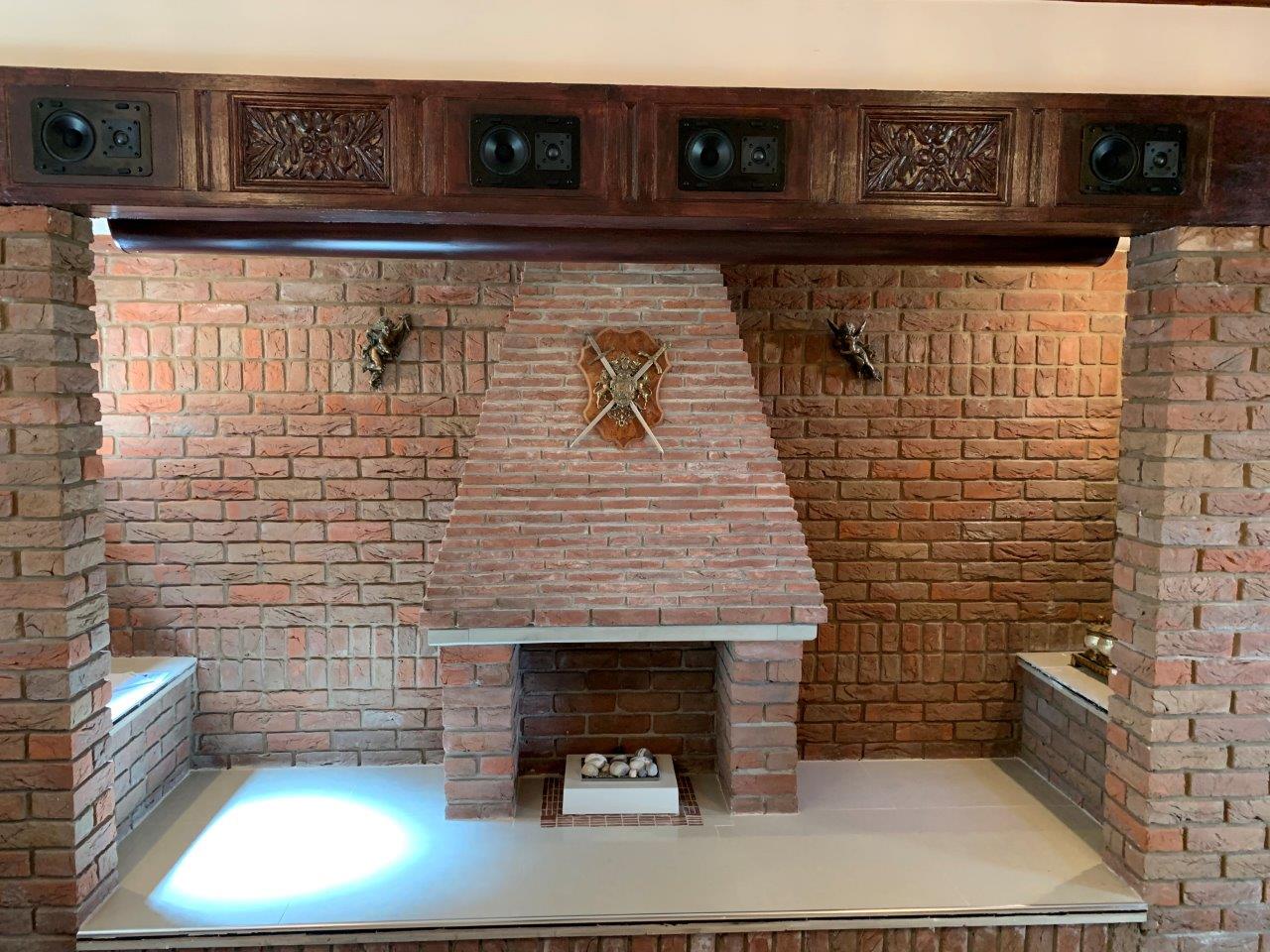 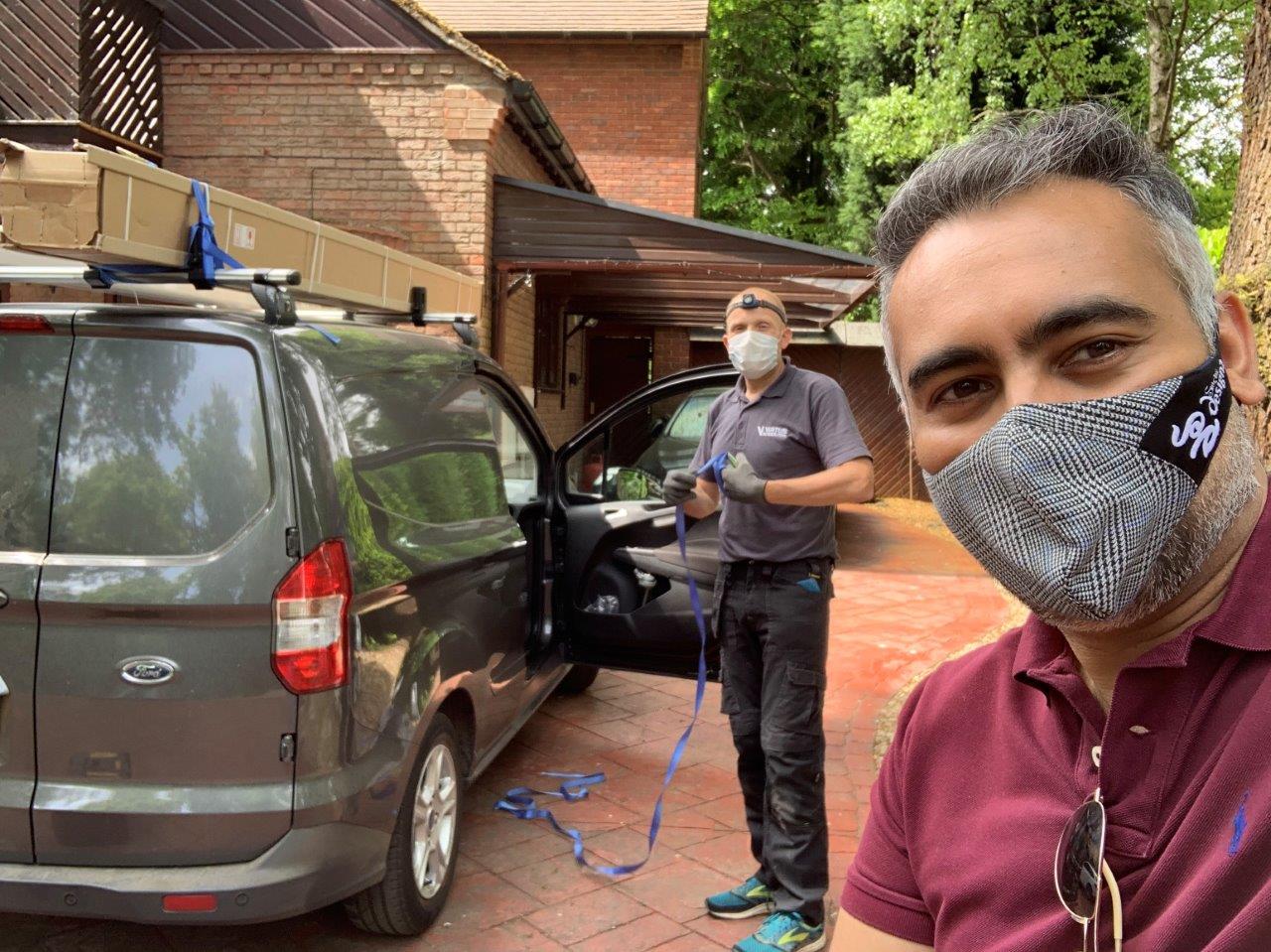 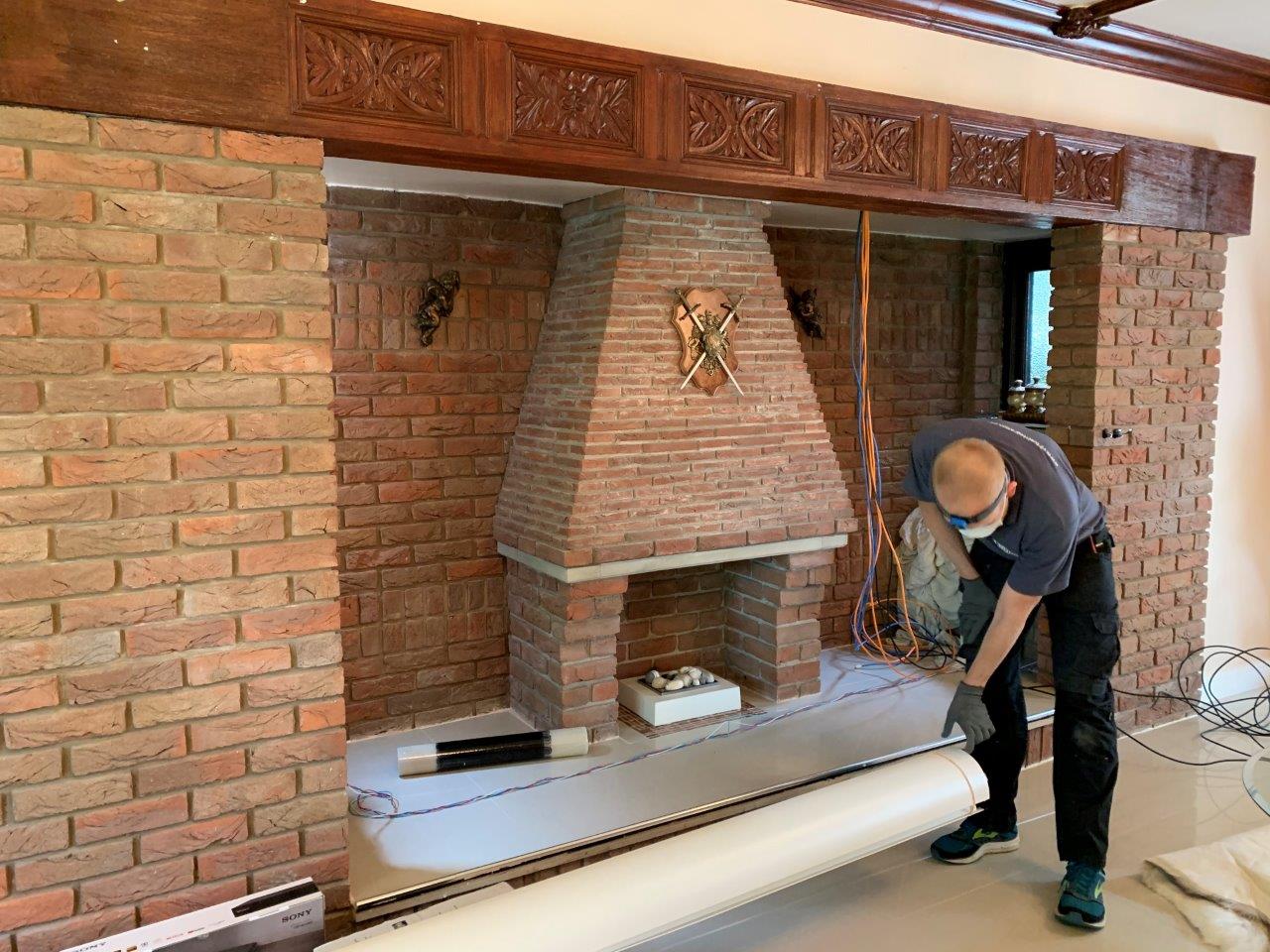 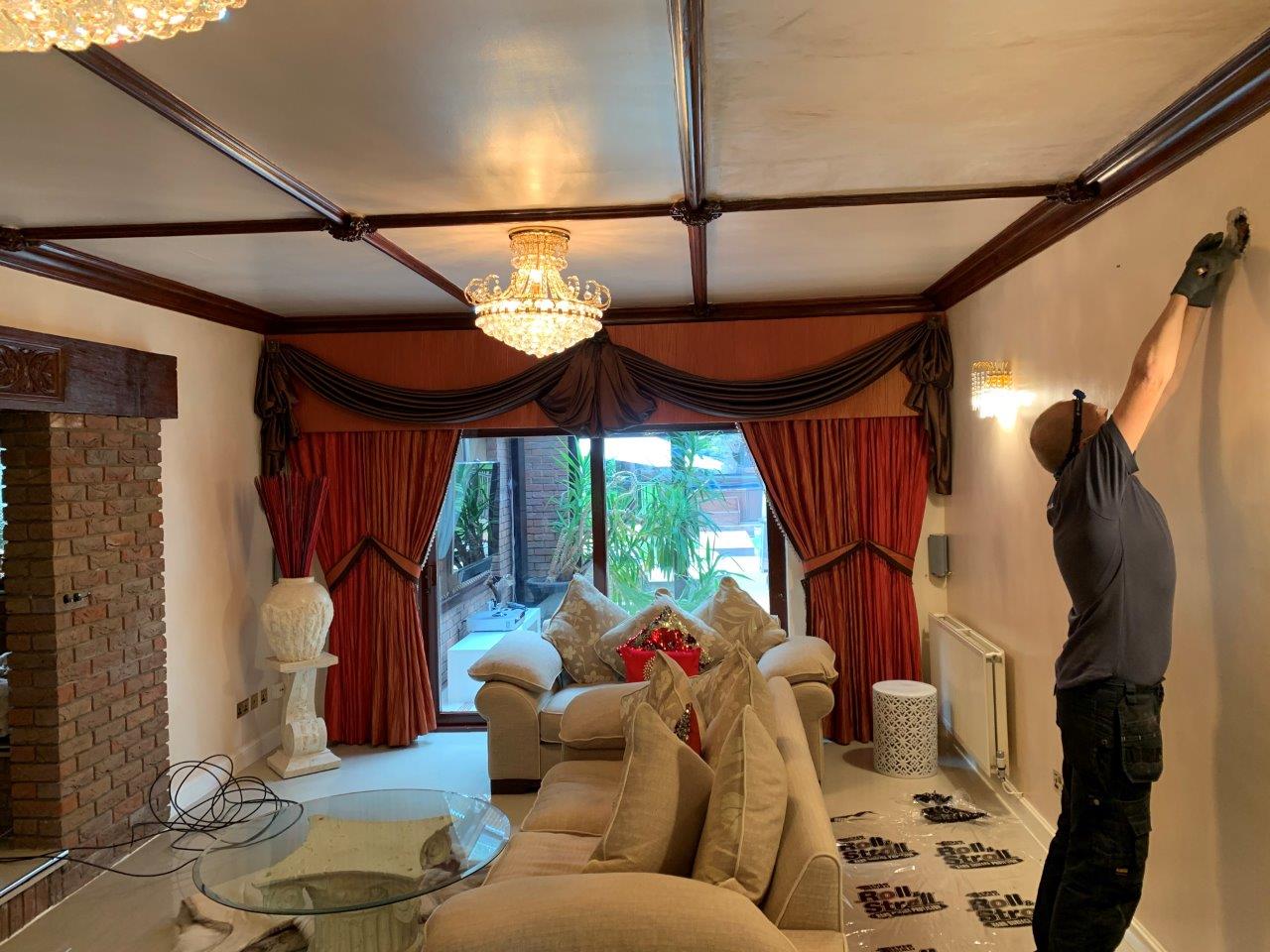 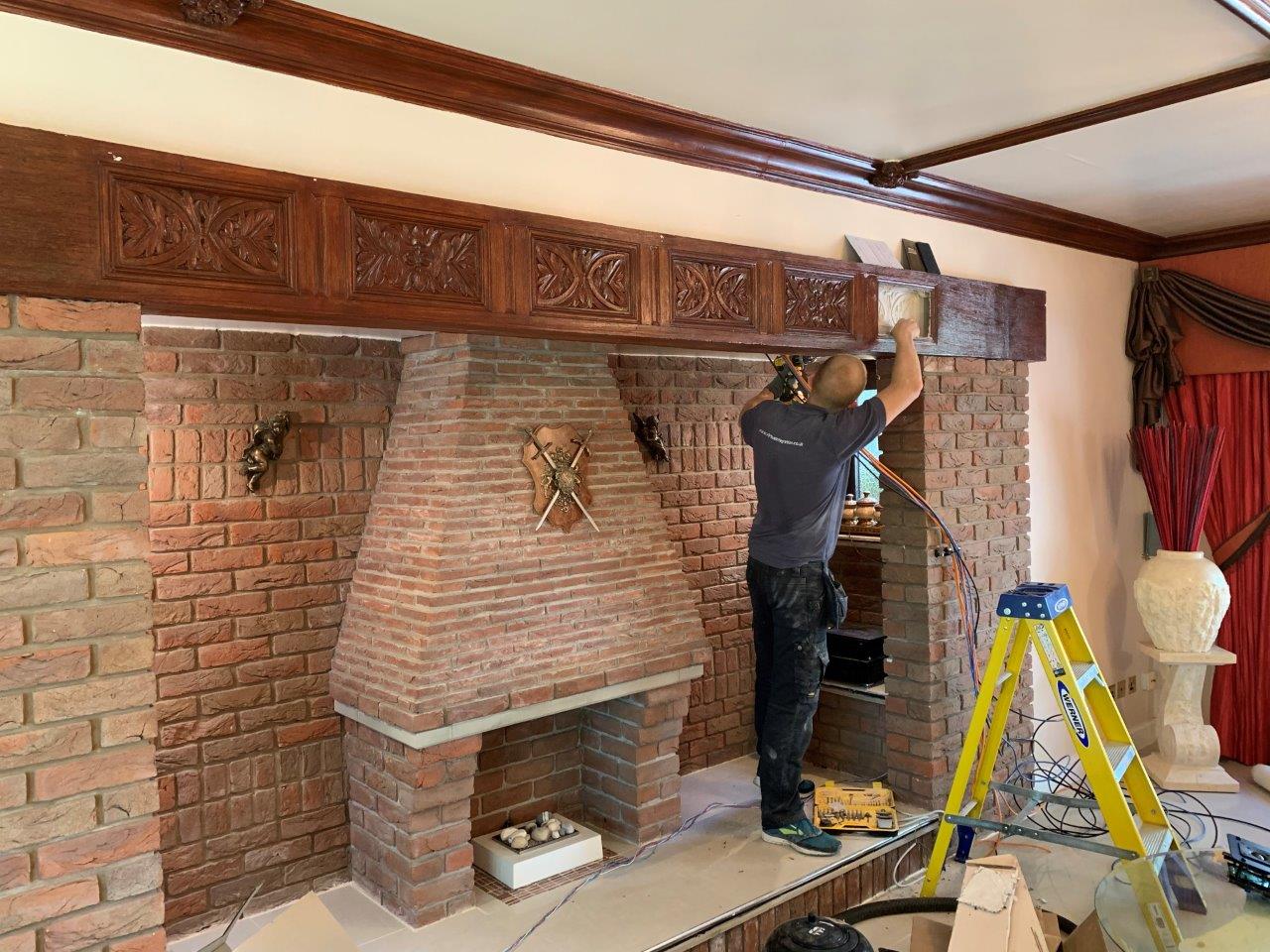 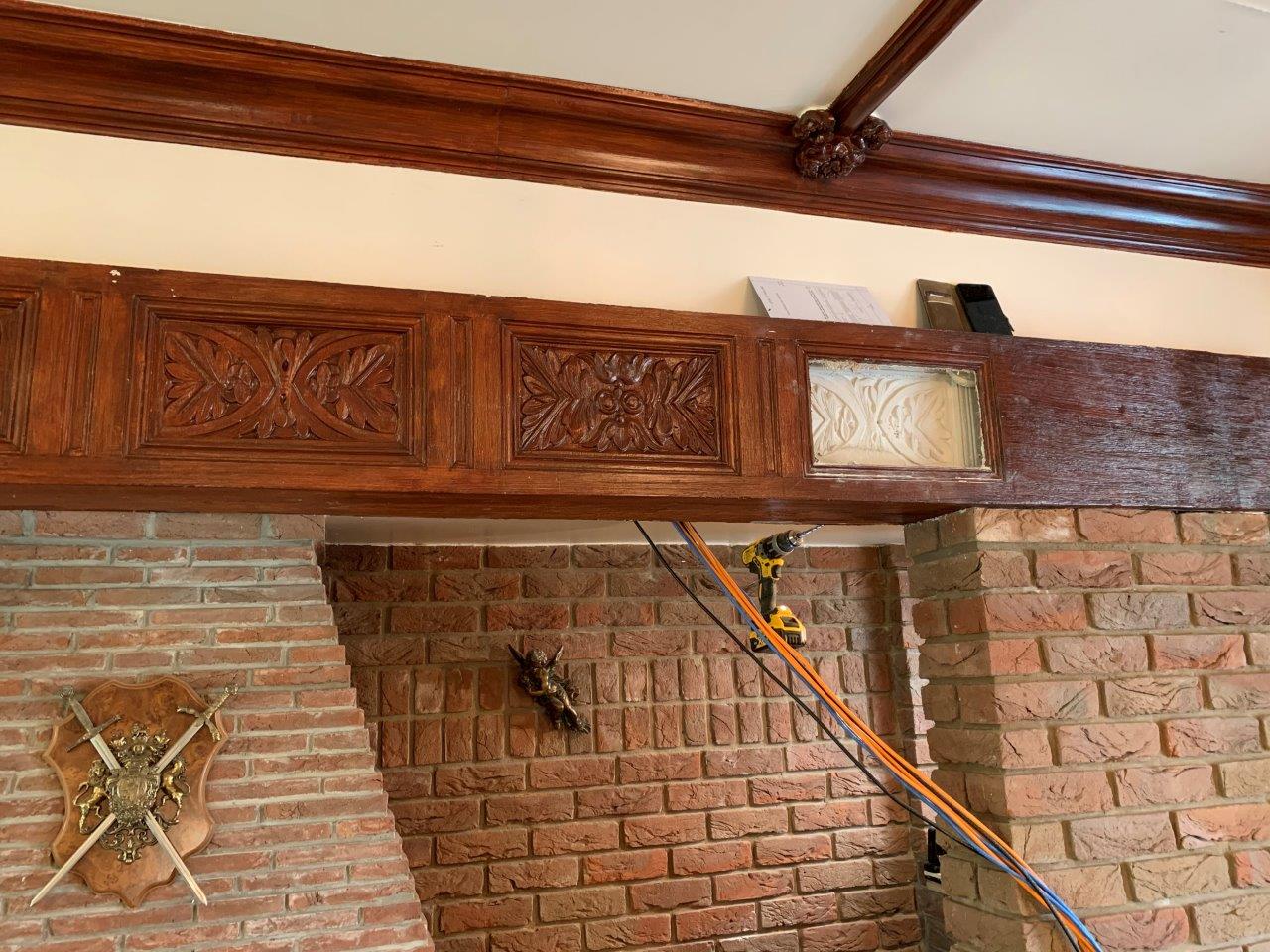 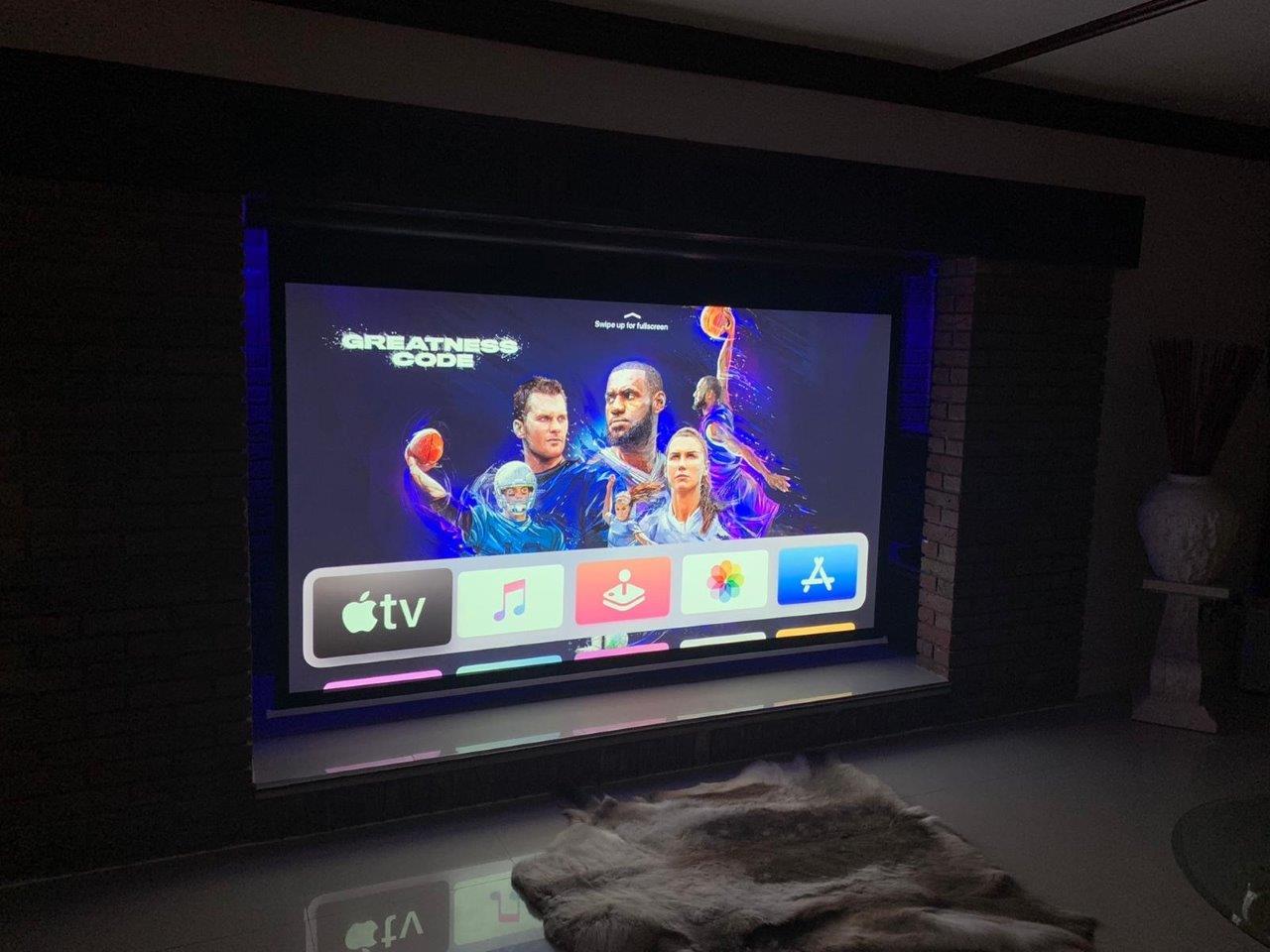 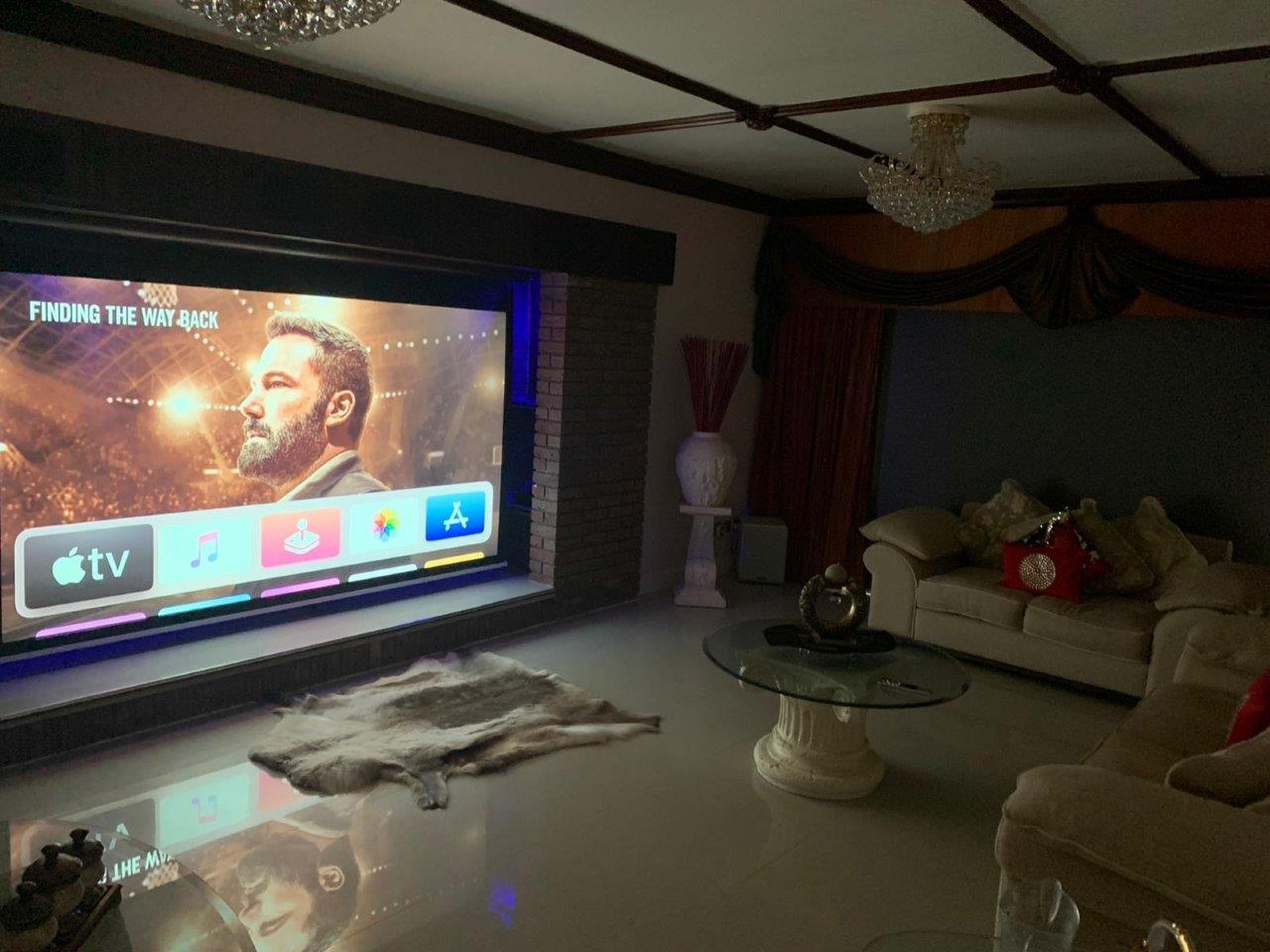 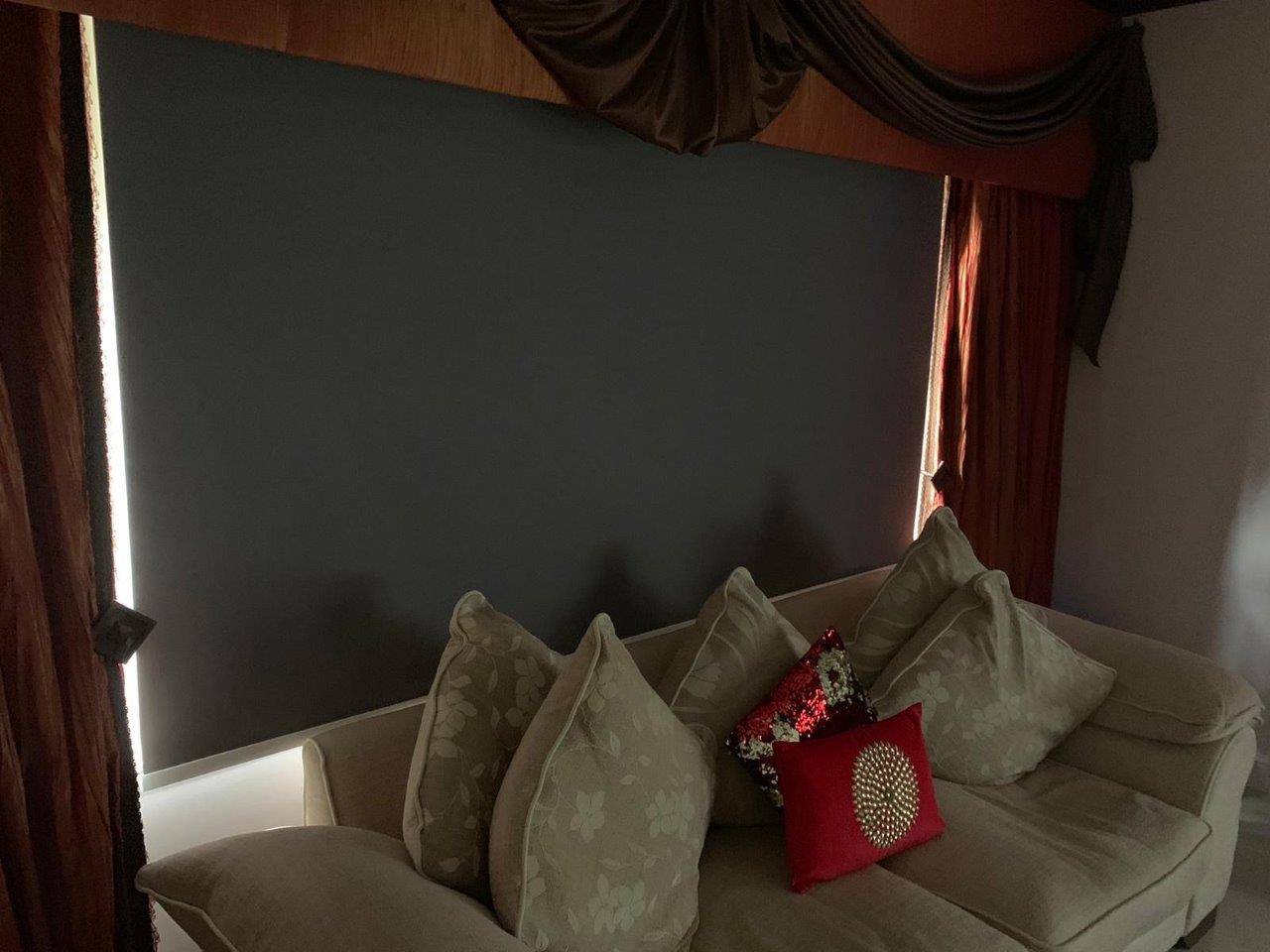 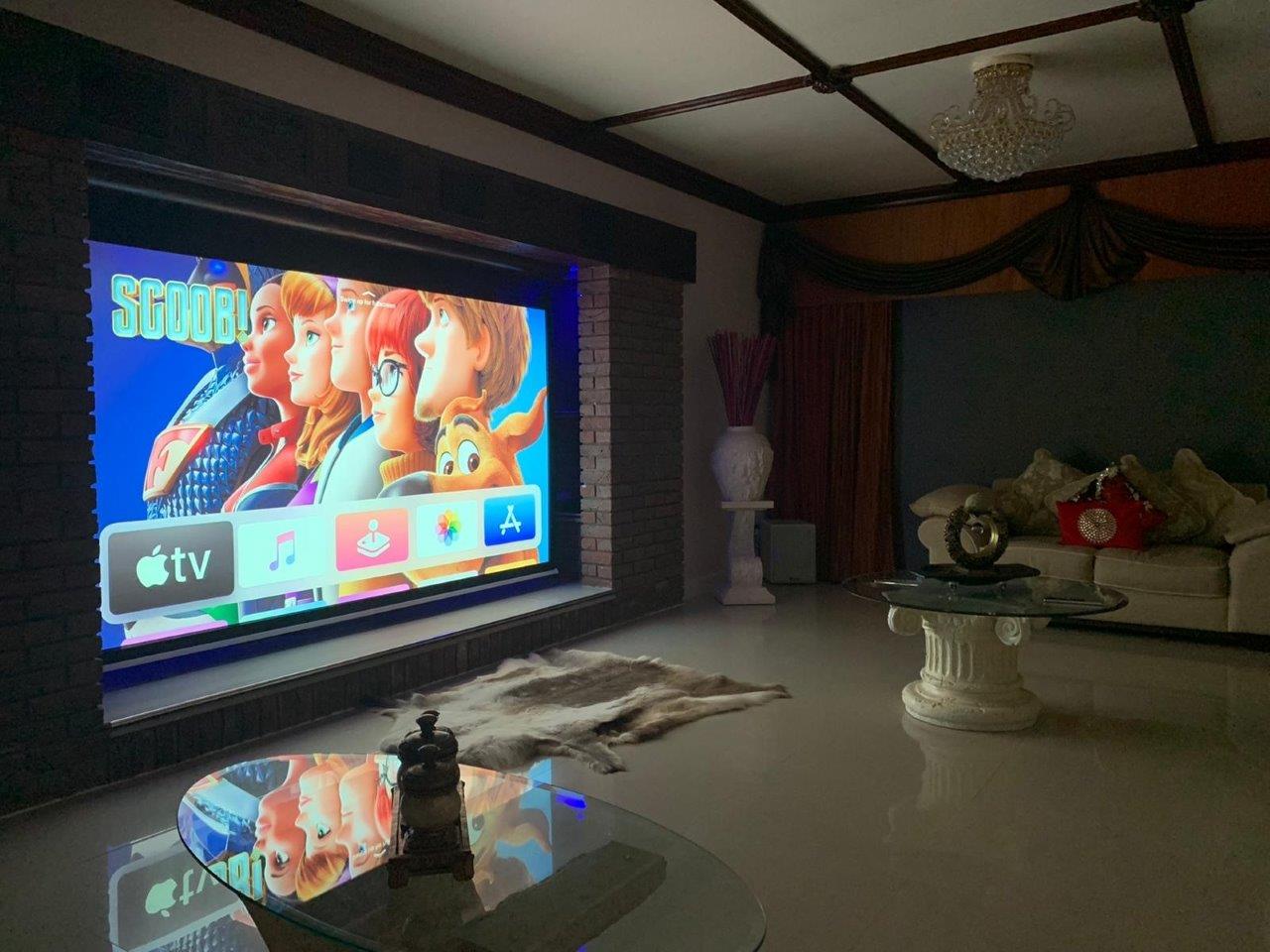 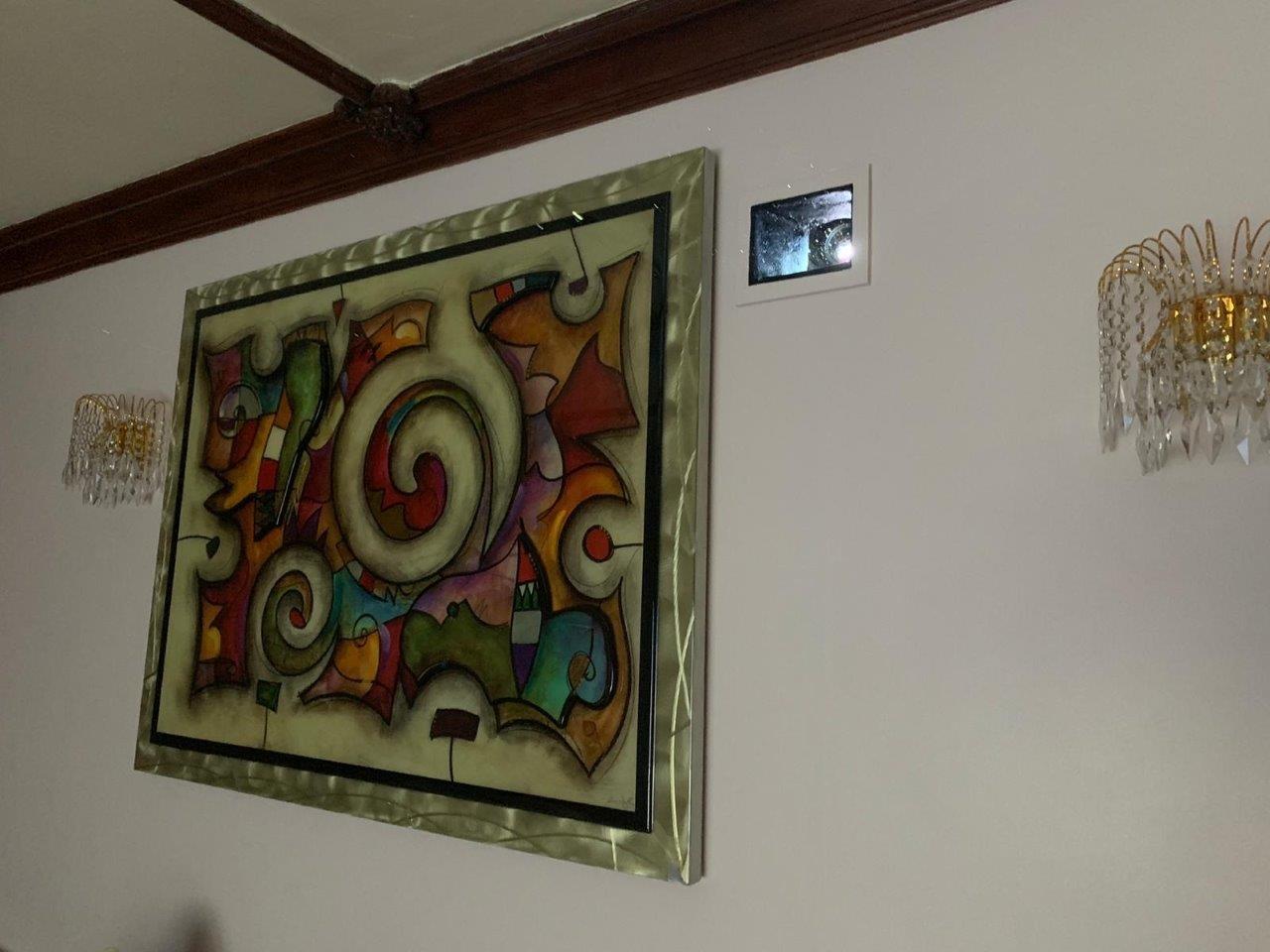 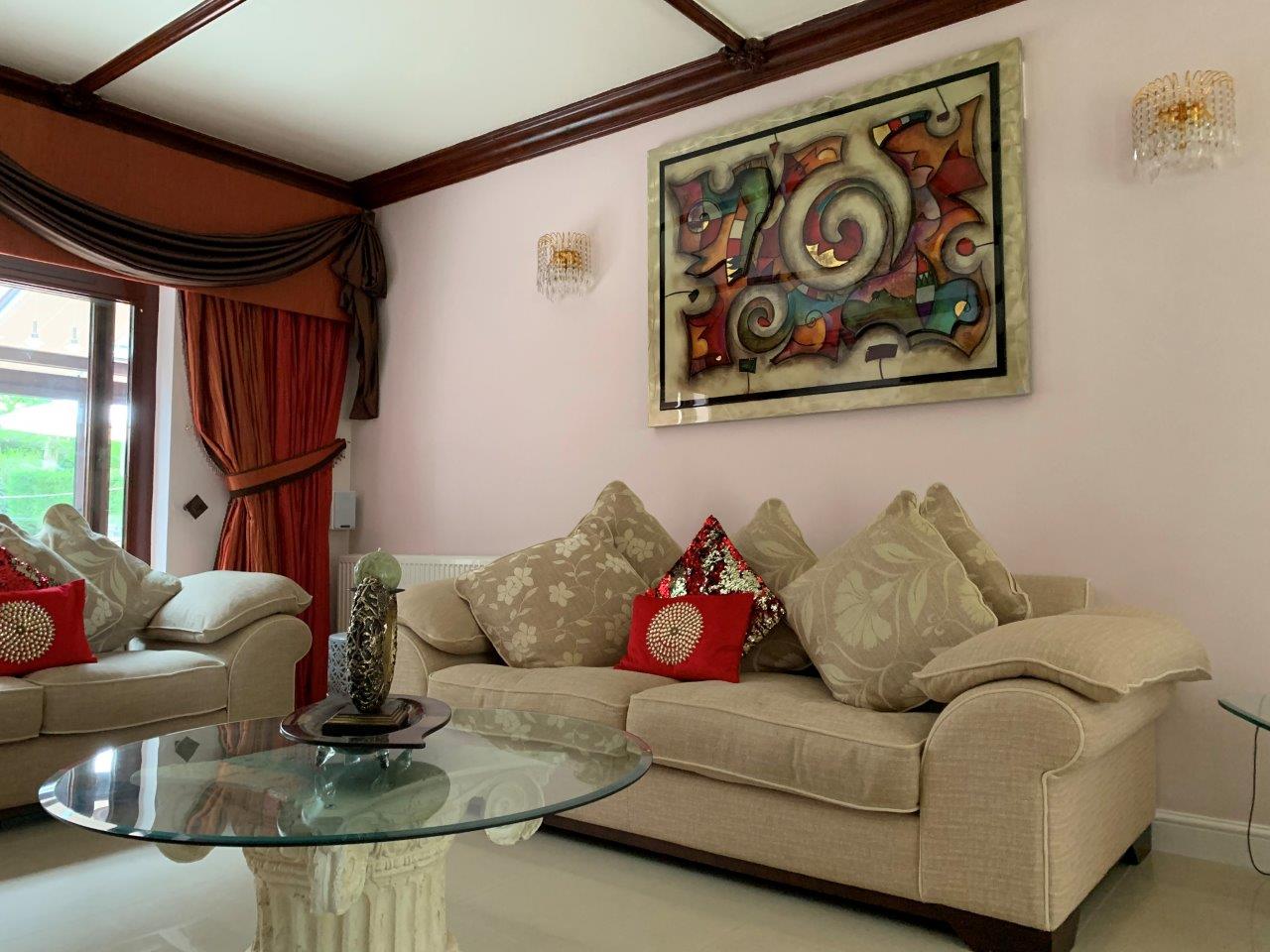 Atif Ghaffar, Director at Zebra Home Cinema, gives EI the tour of this clever install which uses feature items of the room to hide the equipment, turning what could have been serious barriers to a fully integrated finish to a definite advantage.

Atif explains, “I’m a GP by profession and I’ve been an avid AV-enthusiast for the last 25 years. During this time, I’ve spent money on the best kit that I could afford for various set-ups at home and I’ve visited many Hi-Fi and home cinema showrooms across the UK.

“I became particularly fond of Miller & Kreisel speakers and Lyngdorf Audio electronics, but it was apparent that there were no installers in the Midlands providing these brands. So, a year ago, I decided to set up my own business and introduce these systems to the Midlands myself.

“Without any expertise in the actual installation side of things, I had to find an independent installation firm to work with. Luckily, I was introduced to Kaine Pritchett from Virtus Integration. He had extensive experience in the industry, primarily in systems integration and smart home automation. He had also installed M&K speakers in previous jobs and agreed that the association would be mutually beneficial. Zebra Home Cinema was officially launched in 2019 in association with Virtus Integration.”

Atif continues, “My main role is consultancy and design as well as marketing and generating client interest and maintaining those relationships. I’m also the sole reseller of Miller & Kreisel, Lyngdorf Audio and Steinway Lyngdorf systems in the Midlands, however through our association with all the major UK distributors, we are privileged to assist clients in choosing from a variety of brands and systems tailored to their requirements.

“Kaine is very much involved in the design process and is chief of the installation and integration process. Often our clients require a ‘complete home’ approach to establishing a robust network infrastructure and integrating various aspects of functionality – the music and home cinema systems simply fit alongside that.”

Before this particular project the company got off to a strong start with its very first commission being a double garage conversion into a home cinema, featuring 7.2.4 Dolby Atmos configuration.

Atif explains, “Also we felt that our most recent project was a great achievement – it was quite out of the ordinary and required some novel solutions to some tough challenges.”

This latest project involved negotiating some pretty tough obstacles in the room, as Atif explains, “This was the second project which came about following a local marketing campaign. I printed 500 letters, informing local residents about Zebra Home Cinema, what it represented and inviting clients to come and experience a demo. They were all signed, and I hand delivered each one. The client had heard about me as one of their relatives had also received one of my letters. The family wanted to discuss their options about installing a home cinema in an existing lounge and obtain a quote.

“The client had already approached two installation firms previously but felt that their quotes were far too expensive. In fact, they had waited almost two years before deciding to get another one, apprehensive that it would be too costly again.

“Following a telephone conversation and finding a little more about the client and their family set-up, I visited their home the next day to gauge what was required. I use the same process, very much like taking a history from my patients and exploring their ideas, concerns and expectations. I always like to find out who watches what, what do they enjoy the most and get a feel for how the system will be used long term. Often clients will discuss issues with pre-existing systems and sometimes show me other rooms for alternative ideas.”

This particular project however, presented a challenge right from the outset.

Atif reveals, “The home consisted of an extended family set-up. The client lived there with his young family and parents. Whilst there were TV panels in a large conservatory/bar area, he wanted something more suitable for movies and gaming and the only space remaining was the formal family lounge – the restriction being that there was to be no disruption to the overall décor of the lounge and especially the presence of the traditional, inglenook fireplace which was the central feature. There was also a large piece of artwork hanging on the opposite wall which was to remain in situ.”

So, the brief was to install an audio-visual system into an existing formal family lounge, whilst maintaining the existing décor within a specified budget. For this the company specified a 5.2 audio configuration with projector, screen, sources as per the client’s instruction and suitable rack.

The most important feature to the client’s family was the central fireplace and keeping the wall art on display. Taking this into consideration, the team explored methods of installing a discrete system, pointing out technical compromises from the audio point of view but sticking to the original brief pretty strictly.

Atif says, “The most challenging aspect was trying to install speakers into the existing wooden beam above the fireplace. But we did it!”

Whilst there was no change to audio-visual design, the client later opted to have automated blinds so that the family could enjoy using the projector during the day.

Atif explains, “As the fireplace was the main focus of the room, we had to use a motorised, retractable screen. The client and his family watched a variety of content including gaming, so we specified a 16:9 aspect ratio screen to account for all purposes and also within budget. We also painted the projector case as per the client’s request so that it blended in well with the room and didn’t stand out when people walked in.

“The front speakers were to be installed in the wooden beam above the fireplace and we chose M&K in-wall IW85 speakers for this purpose – the dimensions were perfect to fit in the existing frames of the beam with custom paintable grilles which were spray painted to match. M&K systems are based around sub-satellite configurations which allow clarity and dynamism for speech and high frequencies at the listening position whilst the subwoofers take care of low frequencies.

“This allows content to be played at relatively loud volumes without distortion for great performance. We chose a pair of M&K V10 10in subwoofers (in white) to sit in the front corners of the room and used a pair of M&K M40T tripole speakers in the rear corners for surround effects (in white). The advantage of using tripole speakers, particularly for smaller rooms is that they emit sound directly and from either side of the speaker, using the adjacent boundaries, to produce a more immersive, 360°sound-field in the listening environment.”

During the initial discussion of the brief and exploration, the client provided access to an adjacent office space. The team used this space to install the projector and created an aperture in the adjoining wall. All the AV equipment was installed in a rack underneath an existing cupboard space with a custom glass covering door. An Epson EH-TW9400 pro-UHD projector was chosen, based on budget and functionality.

Atif says, “It produces a fantastic image for the distance and has memory zoom function to change aspect ratios depending on what is being watched.”

The final challenge for the team lay in how to move the wall art to reveal the projector aperture.

Atif reveals, “Kaine custom-engineered an ingenious mechanism based on a motorised piston and using kitchen soft-closing drawer rails on which the wall art could be mounted and remotely moved back and forth. For automated blinds, we installed QMotion to the external window and to the internal patio windows. The client opted for a simple Control4 solution to operate all the AV gear and blinds.”

Kaine, sums up, “Balancing budget and system performance meant delivering the ‘hidden cinema’ was especially difficult whilst maximising the budget on the audio and visual equipment hardware.   We settled for locating the equipment in the adjacent home office and projecting the picture image through a hole in the wall which was covered by a client’s artwork when the system was not in use. Also fitting speakers and an electric screen into the existing fireplace meant we had to consult closely with the client to ensure we could deliver on both system performance and room design requirements.

So what are the team most proud of?

For Atif?, “It’s the sliding wall art mechanism and seeing the projector light come on. Genius!

And the client? He and his family love the fact that the living room looks exactly the same as before. Saying that before it was hardly ever used, now with the touch of a button, the whole room is transformed into an amazing entertainment space and has become the family’s favourite room in the house.