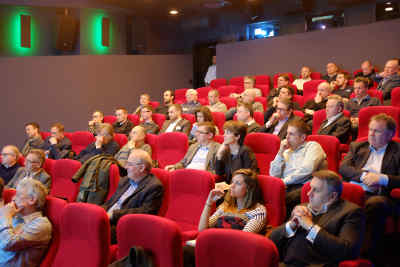 The annual Clarity Conference took place this week at Dolby’s Soho Square premises in London, where Clarity outlined five major policy areas that it will be concentrating on for 2015.

Leading the event was Venkat Venkateshwaran, senior manager EMEA, brand and marketing at Dolby Europe Limited, who informed attendees that this year Dolby is celebrating its 50-year anniversary.

The full capabilities of Dolby Atmos were demonstrated using a range of clips in the 36-speaker Dolby Atmos cinema – including a preview of an as yet unreleased Blu-Ray in Atmos.

Next to speak was Nick Simon and Lucy Twist from GFK, who highlighted interesting trends in consumer confidence for the last year.

They revealed that consumer confidence is now more positive than previously thought, with much higher sales figures compared to this time last year.

This can be attributed to the pre Christmas and Black Friday sales in network music systems, headphones, sound bars, portable radios, 50-inch + TVs and docking speakers.

In one year, audio system sales have risen by 3%, while traditional audio systems have gone down 39%.

Connected audio has risen 27% when compared to last year, while turntables have gone up 79% and amps up 12%.

It was revealed that £408 million worth of wireless audio products were sold in 2014, sound bars being the most popular product.

In the category of docking speakers vs. Bluetooth, Bluetooth is by far the winner in terms of sales.

Trends in TV and sound bars also proved to be interesting. With the popularity of the World Cup and the mania that was Black Friday, sales of large screens rose dramatically and with it, the need for sound bars.

In fact, almost 1 million pieces were sold in 2014, the majority of which featured in-built streaming or an in-built subwoofer.

Next to speak was Richard Hartigan, industry manager for the consumer electronics sector from Google.

Richard spoke about the various ways that you can get the best out of Google to help grow your business.

Richard revealed that 80% of consumer electronics purchasers research online, 72% of which use Google search.

Last year alone, there were 470,000,000 searches for consumer electronics products.

Richard also revealed that Google will be investing further in feed-driven advertising in the near future – where the Google search bar recognises there is intent to buy.

At the top of the page related products appear, along with prices, manufacturers and where you can purchase them.

He also revealed that 40% of the top 100 global retailers do not have a mobile optimised website.

With regards to buying habits, two out of three tech purchases are made offline, interestingly with 45% of people researching in store prior to making an online purchase. Of these, 15% researched on YouTube.

Richard used the Dollar Shave Club as an example of YouTube advertising at its best.

The advert (scroll to the bottom of the page) crashed the manufacturer’s website; the advert cost $4,500 to make, and after it was posted on YouTube the company received 5,000 orders in just one day.

Richard also highlighted the recent trend in un-boxing videos; there was a 200% increase in these searches in the last 12 months.

Continuing the theme, Haymarket speakers and Andy Clough, editor-in-chief at What Hi-Fi? Sound & Vision shared the secrets of how they used social media to grow a brand, advising that social media has a 29% global

Clarity expressed its desire to offer better guidance and revealed that it will switch to online advertising in future.

Following this was a lively Q&A session, where members discussed the future of training for manufacturers, questioning whether they should move to online or not and what the target audience for training is.

Clarity made a note to poll its members to ask what training they require and to think about what the skills gaps are that need addressing.

Attending Clarity members expressed their thoughts on manufacturers and retails, believing that they should put more back into the industry, asking Clarity to make them see the benefits of joining.

Six key policy areas were unveiled during the event:

Clarity will help start-up businesses through one-on-one guidance from a panel of experienced mentors.

Clarity will be retaining the services of an independent trainer to take its training into the stores and will be exploring other ways of delivering training to those who need it.

Clarity will introduce an online sales portal through which retailers can advertise ex-demo, trade in and end of line stock for sale. It will continue adding in-depth advice articles and product reviews to the website and enhance the use of social media.

Clarity will take space at key overseas events in order to showcase British hi-fi, especially from companies without an export presence. Local exhibitors will be invited to join Clarity as a route into the UK market. It will also be seeking financial assistance from Government for UK companies to increase their export activities.

Coming up very soon is the Bristol show and Clarity will be presenting the third annual “Best of Show’ awards to recognise the hard work put in by exhibitors. The hugely successful involvement with the National Audio Show will be repeated in 2015 and further developed.

Earlier in the day, the members of Clarity voted for the board of directors to serve during 2015. Laurence Armstrong, chairman, thanked the board for its efforts in 2014 and praised the work of retiring director, Rachael Prasher from Haymarket. Joining the board for the first time were Richard Trotter (Arcam) and Andy Clough (Haymarket).

The complete board comprises: