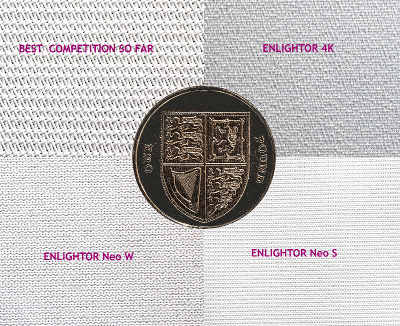 Depending on the users requirements, the Enlightor Neo Projection Surface comes in a range of sizes.

If users require a small screen, then the Enlightor Neo-S should offer a screen size of up to 180cm high.

If it’s a wide screen that is needed, then the company is offering up the Enlightor Neo-W, which allows a screen size designed for both domestic and professional uses, at 5m high.

Both the Neo-S and Neo-W allegedly offer improved performance over its predecessor, with the Neo-S featuring a gain of 0.95, improved video contrast and dynamic, improved acoustic transparency and insertion loss of 1dB.

The Neo-W offers a gain of 0.8, an enhanced weave pattern and a reduced insertion loss that does not exceed 1.5dB.