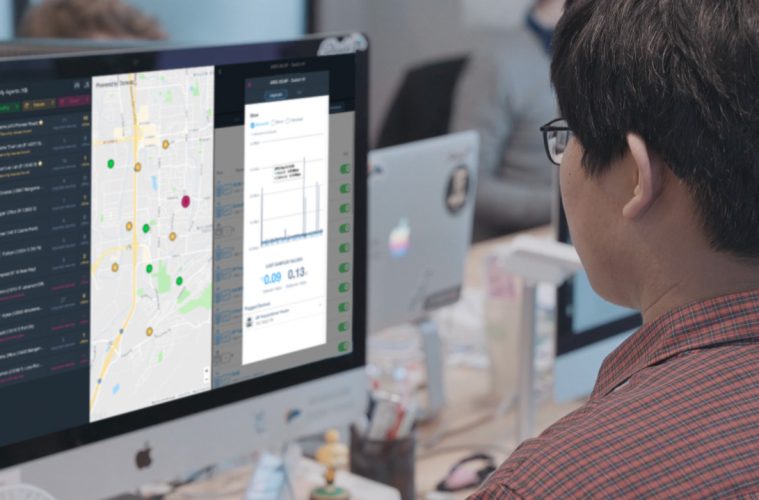 Speaking exclusively to EI, JB Fowler, chief revenue officer for Domotz explains the present and future of the platform and its place in delivering new abilities and revenue streams to installers.

One of the major forces behind the growth in remote system management has been the Domotz platform.

For those unfamiliar with the system, Domotz uses three main elements to deliver a range of remote management abilities via the Domotz Mobile Application, the Domotz Cloud and the Domotz Network Agent.

These elements are combined with a hardware partner located within the home or building. Domotz has its own hardware, but there are also a range of hardware partners and lots of products that are compatible with the system.

The platform can also cope with set ups that have more than one LAN network in a building, useful if the system is being used in a commercial setting such as retail.

JB says, “The most obvious benefits we are delivering is to stop truck rolls and increase efficiency for integrators allowing them to deliver a more rounded service to customers. We also encourage installers to use our system to be pro-active and build enough of a support package to justify service contacts.

“Power-cycling is of huge benefit to installers as often this can solve most issues. This can be performed direct to a given product, but also via units such as PDUs, WAPs, or anything with a PoE connection.”

Security is important to Domotz and the system uses a secure channel (Encrypted Overlay Network) between the network and its cloud service as well as an HTTPS channel between the App (either Mobile App or WebApp).

This means that all communication from the App to the Agent is encrypted. JB also says that installers find the speed tests the system provides very useful. The system can also deliver more detailed information and history of what has happened on the network so reoccurring issues can be identified to a particular product, time or scenario.

As well as interrogating products such as a router, the system can spread out over a wireless network and investigate what is happening there.

Useful abilities here include spotting the bandwidth at a given point in the network and making sure products such as Apple TV are getting what they need.

JB adds, “With the amount of firmware up-dates that are needed to keep a modern home up and running, the system helps here as well. From the UI installers can see which products are due for firmware up-grades and remote manage the whole process making sure everything goes smoothly.”

Another cool ability is using TCP Tunnelling to create a secure connection to automation systems such as Crestron, Savant or Lutron.

Using this ability, it’s possible to reprogram a system remotely via the automation platform’s own programming software. JB says, “It’s also possible to use SNMP sensors to set up more unusual alerts. A member of our own team set up a sensor connected to a Raspberry Pi to notify him of small changes in temperature in his tropical fish tank, this is the level you can go to if needed.”

As for new developments, JB tells EI that the WyreStorm family is the latest big name to sign up to be a compatible partner, primarily with its NetworkHD range.

This should provide particular abilities when dealing with installs such as sports bars where large amounts of screens are involved to maintain system health and reliability.

Denon and Marantz are also recent partners providing access to much of their AVR ranges and with 2018 models providing detailed access and connectivity.

JB also hints that there are more manufacturers signing up as we speak, but they can’t be officially revealed as yet, however he does say that video distribution is going to be a big growth area in terms of hardware partners.

Through the same path, installers can also review IP camera video profiles or capabilities. It is also possible to send a soft-reboot command to the IP Camera.

JB is also proud that the Global Presence Alliance, a group of commercially focused installers who look to deliver recognised and consistent standards to end user companies, has decided independently to adopt the Domotz platform as its remote management system of choice.

Compatibility with the Zigbee platform is also close to being officially announced and a new alert ability to warn the user if a device is going to slow down in answering to ‘Ping’ messages is also coming. Another new element is also coming via the Application Programming Interface (API) which the Domotz UI is based on.

JB explains, “We are in the process of providing access to the API so installers can more closely control and change what they see, allowing them to effectively create their own UI within the system. Installers will also be able to call into the system and take images direct from the UI. It’s difficult to make an interface that suits everyone, so we decided to give integrators the power to make their own.”

Another big change is coming in terms of how installers pay for the system. Instead of the older Domotz Credit system, companies are now able to have their monthly charges allied to a given credit or bank card simplifying the process.

Integral pillar of projects and potential

So, plenty to keep the company busy in the coming months. The growth of Domotz shows just how important networking as part of an install has become. However, perhaps even more significantly, as installers seek to keep delivering services other plug and play systems cannot, the ability to remote manage, and keep customer’s automation and digital lives controlled and efficient, could become a significant revenue opportunity and form the backbone of not just what an installer does, but what an installer is.

This article is an extract from EI Magazines’ major feature on networking and remote management, check out the whole article in the next issue.