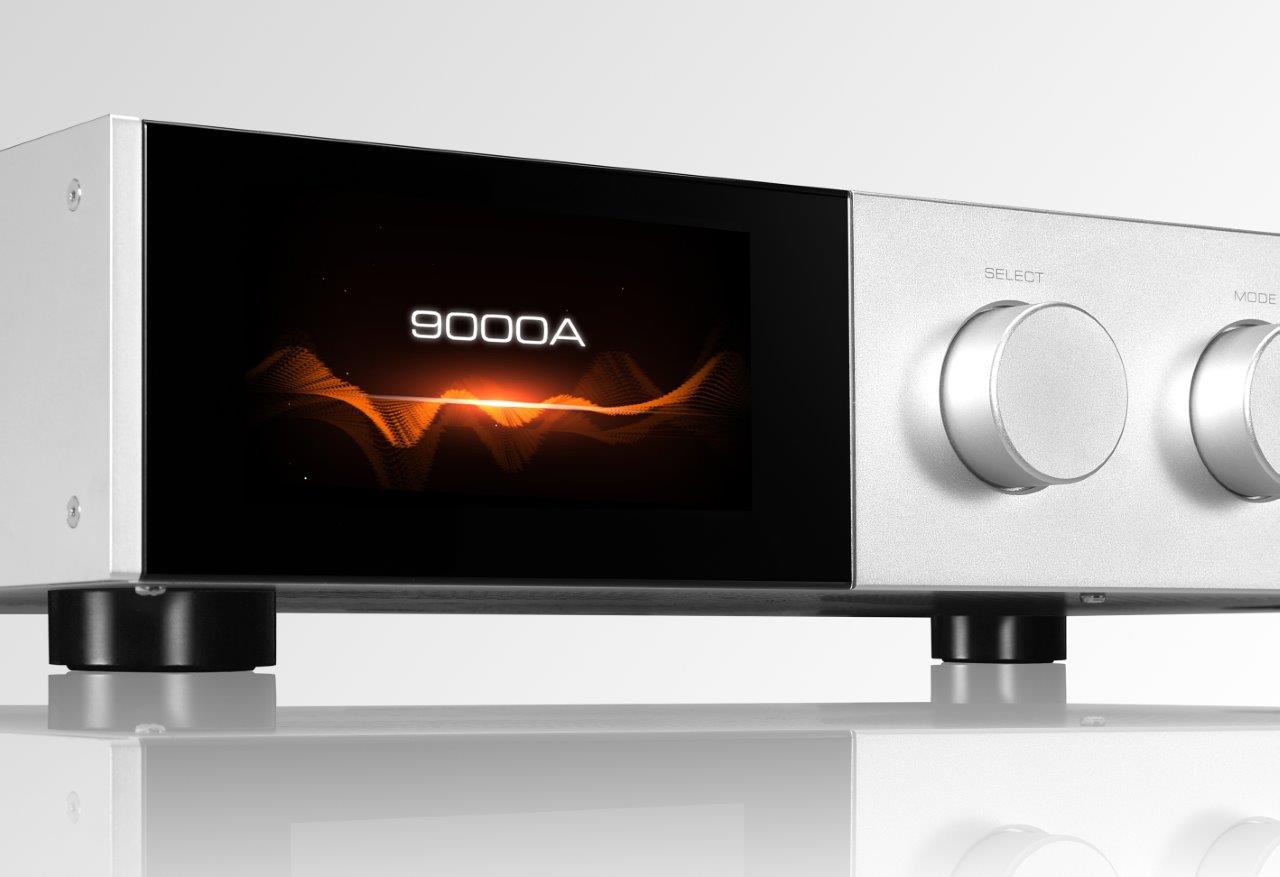 Painstakingly engineered for exceptional sonic performance with all manner of digital and analogue sources, the maker says the 9000A is its best-ever integrated stereo amplifier.

The 9000A is the first component in Audiolab’s new flagship range, the 9000 Series and introduces a smart new aesthetic, as befits a new flagship range. Solidly built and ‘impeccably’ finished, the amp’s appearance has been created to reflect the crisp elegance and controlled muscularity of its sound. Three rotary controls and an absence of buttons (except for the power switch) give the 9000A’s fascia a clean appearance, augmented with a 4.3in colour screen.

The screen displays a variety of information in a more visually appealing way than some other integrated amps – volume level, input selection and format data. It gives access to the amp’s menu system, which includes such options as digital upsampling, input sensitivity adjustment, balance control, automatic standby switching, and volume curtailment when the amp is powered up. It can also be set to display a VU meter in ‘analogue’ or ‘digital’ form, showing real-time decibel levels for the left and right channels.

Classic Hi-Fi for the modern age

Functionally, the 9000A builds upon the successful 6000A, which launched in 2018 and remains one of Britain’s best-selling integrated amps. The 9000A is born from the same ideal of high-quality married to versatility, but greatly enhanced in every area – cutting-edge digital audio technology, massively upgraded analogue circuitry, more connectivity and a performance that elevates the open, detailed and engaging sound for which the 6000A is known.

The 9000A’s lead electronics designer is Jan Ertner – the same man responsible for the 6000A, as well as many other award-winning audio components.

The 9000A incorporates state-of-the art digital-to-analogue signal conversion, enabling digital sources to be connected directly without an external DAC. A USB Type B input caters for PCs, Macs, smartphones, tablets and digital storage devices, alongside four S/PDIF digital inputs – two coaxial and two optical. There are also four line-level analogue inputs – three stereo RCA and one stereo XLR for balanced connectivity – plus an MM phono input for a turntable.

Those wishing to stream wirelessly from smartphones, tablets and computers can take advantage of the 9000A’s high-spec Bluetooth facility, which is Bluetooth 5 compliant for optimum range and speed. Decoding is included for high-definition Bluetooth formats aptX HD and LDAC, as well as aptX Low Latency, regular aptX, AAC and SBC.

The 9000A does not include built-in network streaming. Its creator states from a performance point of view, incorporating network streaming of sufficient quality to match the amp’s sonic ambition within the same chassis would have meant compromising performance in other areas – the 9000A is, first and foremost, a high-performance integrated amplifier. Also, not everyone requires network streaming; by developing a separate, dedicated audio streamer for the 9000 Series – set to arrive in early 2023 – Audiolab says it will be able to deliver optimal performance and system flexibility.

The 9000A incorporates the ES9038PRO – an eight-channel DAC chip that is said to represent the pinnacle of ESS Technology’s current Sabre range. This is accompanied by proprietary circuitry to make the most of the chip’s HyperStream II architecture and Time Domain Jitter Eliminator technology for unprecedented dynamic range and ultra-low distortion.

No company knows more about making the most of Sabre DAC technology than Audiolab, argues the company, having worked with it for years through several product generations. Although always technically excellent, Audiolab says these DAC chips are also challenging to implement to maximum effect and must be integrated into a product’s circuit design with care to extract their full sonic potential. The post-DAC active filter is a critical element and Audiolab has developed a new circuit that is perfectly tailored to make the most of the ES9038PRO. 4

The 9000A’s hi-res audio support is state-of-the-art, handling PCM to 32-bit/768kHz and DSD to 22.5MHz (DSD512). Every significant hi-res and lossless audio format is catered for, including FLAC, ALAC, AIFF and WAV, as well as compressed legacy formats.

The 9000A also delivers full decoding of MQA, the hi-res streaming technology. This means that the complete ‘three unfold’ decoding process is performed internally, as opposed to just the final unfold in the manner of an MQA renderer, making the 9000A a strong amplifier for subscribers to Tidal’s ‘HiFi Plus’ tier where Tidal Masters (MQA) content can be found. The 9000A is officially ‘Roon Tested’ too, ensuring it works in a Roon audio environment.

Users can opt to upsample digital audio signals to 352.8kHz or 383kHz, and five DAC reconstruction filter settings allow the listener to adjust the sound to suit the source material – particularly useful given the variable quality of digital formats and streaming platforms. No matter how it is connected, via USB, S/PDIF or Bluetooth, every digital source benefits from the exceptional quality of this DAC – you will not find a finer DAC stage in any integrated amplifier anywhere close to the 9000A’s retail price.

The 9000A builds on the expertise Audiolab has built through four decades of Class AB amplifier research and design, pulling out the stops to take the company’s time-tested circuit concepts to a new level. With a rated output of 100W per channel into eight ohms – double that of the 6000A – it delivers sufficient power to drive any loudspeakers with consummate ease and plenty in reserve.

The 9000A’s power amplifier is a dual-mono design with entirely separate power supplies for the left and right channels, delivering detail resolution and spacious, well-defined stereo imaging. A low noise 320VA toroidal transformer combines with 60,000uF reservoir capacitance and four output transistors per channel, specifically configured to improve linearity under difficult load conditions and capable of delivering a maximum output current drive of 15A per channel.

This high current drive capability ensures the output stage remains under minimum stress, leaving the rest of the amplifier free to operate under optimal conditions. The result is said to be an amp that delivers wide ranging, free breathing dynamics whilst retaining a vice-like grip on the music and revealing the subtlest details in any recording.

The preamp section is kept as simple as possible to maintain signal purity, with line input signals passing to a precision, microprocessor-controlled analogue volume stage. Much effort has gone into the physical layout of the 9000A’s circuitry, protecting the sensitive preamp section from noise interference. Independent low-noise power supplies for critical stages, highly effective RF rejection and meticulous power supply decoupling on the power amplifier modules contribute to a performance on par with much more expensive two-box pre/power amp systems, says the maker.

Audiolab has developed a new, improved MM phono stage for the 9000A, ensuring vinyl is treated with the same care as digital sources. Thanks to a high-quality, low-noise circuit with precise RIAA equalisation, precision input filtering and an upgraded power supply, every drop of detail that’s dug from a record’s grooves is conveyed with engaging energy and crystal clarity, claims the company.

The phono stage handles moving magnet cartridges but is not switchable to suit low output moving coil types, for good reason. Phono stages in integrated amps that cater for both MM and MC cartridges are usually a compromise, says Audiolab, a good MC cartridge will invariably benefit significantly from a high-quality offboard phono stage. Rather than cover both bases to a merely adequate degree, Audiolab decided to focus solely on making an excellent MM phono stage – for users of this cartridge type, this is all the phono stage they will need.

Headphone listeners are served by the 9000A’s dedicated headphone amplifier. With its current-feedback design and high slew rate, a dynamic and detailed performance with all manner of headphones is assured says the maker.

As is traditional with Audiolab’s integrated amps, the 9000A offers three distinct operational modes, reflecting its discrete internal architecture and enabling it to adapt as its user’s requirements evolve.

The primary mode is ‘Integrated’ – this combines the pre and power amp stages, for the connection of digital and analogue sources to the amp’s inputs and a pair of speakers to its binding posts.

‘Pre-Power Mode’ disconnects the pre and power amp stages. The allows the 9000A to be used solely as a power amp – for example, connected to an AV processor in a home cinema system. It also enables additional signal processing to be added, by connecting the 9000A’s ‘preamp out’ socket to an external processor, then returning the processor’s output to the amp’s ‘power amp in’ socket.

Finally, ‘Pre Mode’ disables the power amp stage, turning the 9000A into a standalone DAC/preamp. This enables external power amplification to be added, thus providing a possible upgrade path.

The 9000A is available from mid-November in a choice of silver or black, at an RRP of £1999. It is joined at launch by the 9000CDT CD transport, with the 9000N network audio streamer following in Q1 2023 to complete Audiolab’s flagship 9000 Series