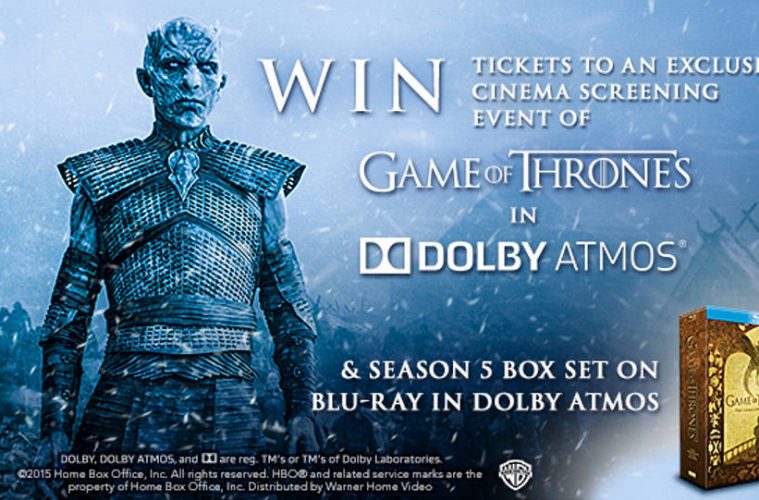 In conjunction with HBO and Dolby Laboratories, CE Pro Eu is offering an installer the chance to win a pair of tickets to attend an exclusive screening of the show-stopping Game of Thrones episode, ‘Hardhome’ in Dolby Atmos at the Empire Cinema on Leicester Square, London on March 14th.

The screening will be followed by a Q&A by special guests.

Game of Thrones is the first ever TV series to feature Dolby Atmos and the event is being held to celebrate the release of Game of Thrones: The Complete Fifth Season on Blu-ray in Atmos.

In addition to winning tickets to the screening, the winner will also receive the season five box set of Game of Thrones.

Game of Thrones, winner of 12 Emmy Awards, is bigger than ever and fans of the hit show can add this epic new season to their collections on Blu-ray in Dolby Atmos sound from March 14th.

Dolby Atmos makes sound come alive from all directions, including overhead, and can project up to 128 simultaneous sounds independently to fill a home theatre with astonishing clarity, power, detail and depth.

The winner and a guest will attend an exclusive screening of the Game of Thrones ‘Hardhome’ episode in Dolby Atmos at the Empire Cinema on Leicester Square, London (March, 14 2016).

Game of Thrones: The Complete Fifth Season on Blu-ray in Dolby Atmos.

The screening will be followed by a Q&A with special guests.

You must be an installer to enter.

Get your entries in by 12pm Friday 11 March. The winner will be announced later that day.