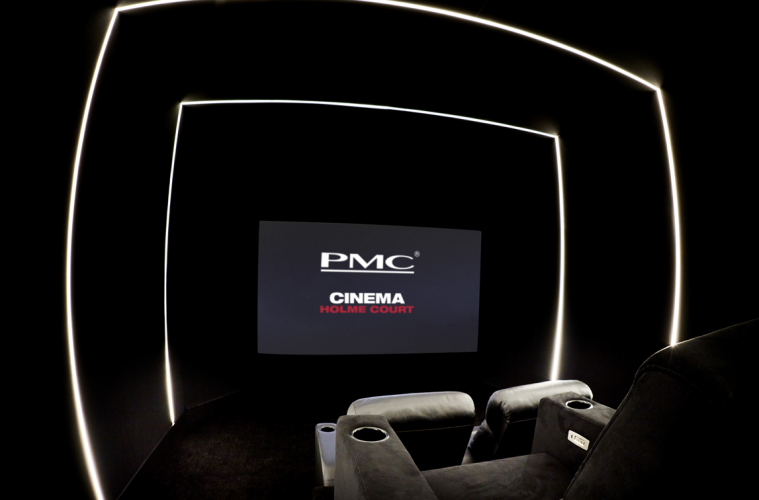 PMC is excited to announce the completion of a new state-of-the-art Dolby Atmos home cinema within its Holme Court headquarters. Created to showcase the company’s dedicated installation loudspeakers, the 22 square metre cinema will be used to demonstrate to custom installation, retail and global distribution customers.

Conceived by Ian Sutton, director of PMC Distribution UK, the vision was to create a space in which PMC could invite its clients from around the world to experience the very best that can be achieved in a home cinema environment.

PMC is well known for its close involvement with the movie industry, designing the speakers that are used by the major studios to create the film soundtracks. The new Holme Court facility is the perfect place to demonstrate cinema sound for home installations, with the same stunning dynamics and awe-inspiring realism experienced in the leading studios.

To achieve this the company enlisted the services of Guy Singleton, owner of Imagine This.

Singleton’s role was to take over a space within the Georgian mansion, that has been PMCs head office since 2014, and overcome the obstacles a building of this age presents to produce an acoustically and aesthetically perfect cinema space.

“We were working with a number of challenges during this design and build project,” says Singleton. “We had to overcome the issues presented by such things as traditional sash windows which vibrated with low frequencies and a large void under the floorboards that acted as a bass resonator. These were coupled with the global supply chain issues thrown up by the pandemic, which meant obtaining some materials proved to be very tricky.”

“But he managed it with astonishing results,” adds Ian Sutton. “We have a cinema space which is worthy of the superb new PMC Ci series speakers, that we can now show off in the kind of environment they were designed for.”

The build incorporates three of the flagship ci140 speakers plus two ci140 subs for the front LCR channel duties, mounted behind the acoustically transparent screen, in a very sturdy and inert baffle wall which is built to THX standards.

Surround duties, in the 9.1.6 cinema, are shared between six of the ci65 models for the walls, with six ci30s mounted in the ceiling for the height channels. And, while this is designated as a .1 LFE installation, there are actually three subwoofers in operation (in addition to the two ci140 subs). Two of the company’s active PMC SUB 2s are mounted in the front wall beneath the screen, with a passive XB3 mounted underneath the rear seating stage area.

Many other companies were involved in the supply of product for the PMC cinema and thanks must go to Barco for the Balder 4K Laser projector, Acoustic GRG Products for the acoustic treatment and fabric walls, Kordz for all of the cabling, Crestron for the control system and Acoustic Innovations for the luxurious cinema seating.

The PMC Cinema is now complete and will be welcoming its first trade visitors from the UK’s custom installation and retail sectors, and PMC’s overseas distributors very soon. It is also envisaged that end-users wishing to embark on a high-end cinema build of their own will be welcome to visit with their installers.