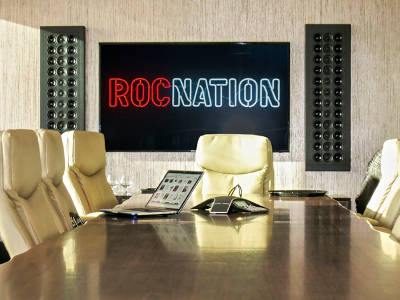 Artcoustic Loudspeakers has been chosen by Roc Nation, the American entertainment company founded and owned by rapper and record producer Jay-Z to handle the audio play-back in the company’s offices.

The Spitfire 24-12 technology in the New York tower block is installed in the vice president’s office and the main boardroom.

The office’s main receptionist says: “Everyone wants to book the main boardroom as they’re all so impressed with the system installed in there.”

The Spitfire Series from Artcoustic are designed for the finest dedicated home cinemas, lounges, offices and other interior spaces where high-quality audio and high quality aesthetics need to be combined.

Artcousitc included on this case study