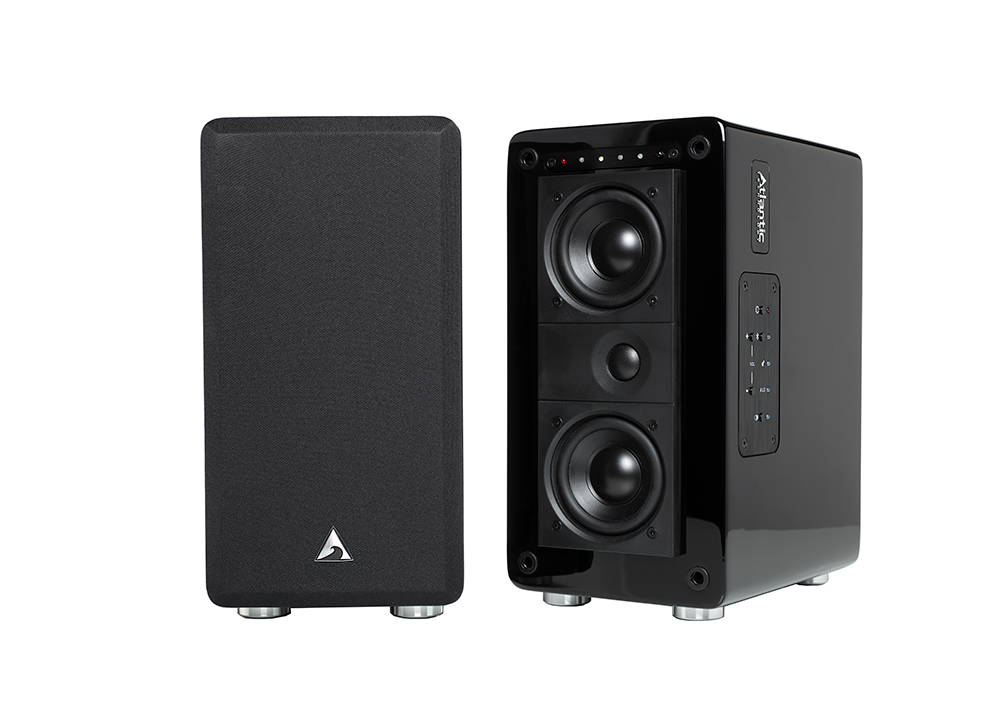 Atlantic Technology has released the SKAA wireless subwoofers for the CI channel. Compact and slim, two models are available – each the perfect complement to any wired or wireless system.  They are the newest products in Atlantic’s growing SKAA wireless eco-system, joining the FS-252 active bookshelf speakers and STA-200 100W x 2 integrated amp.

SKAA is a new international wireless standard purpose built from the ground up to work seamlessly in all Hi-Fi applications.

SKAA also delivers a signal up to a 150-ft range using the worldwide open 2.4 GHz band.  It’s reliable because of its patented Walking Frequency Diversity (or WFD) channel-hopping technology with error correction eliminating interference, clicks, pops or dropouts even in the noisiest RF environments common in tech-laden homes, apartments, businesses or even busy trade shows.

No special app, network, Wi-Fi set-up, passwords or pairing is needed to connect SKAA devices; just press one button to connect any SKAA speaker, receiver or headphone to whichever audio source you desire.

The FS-252 active speaker system is both a SKAA receiver and transmitter. As a receiver, it can be connected to a wide variety of analogue media sources (CD players, TVs, etc) via various wired connections and wireless digital media sources equipped with Bluetooth or SKAA transmitters – a capability that sets them apart from other multi-room systems. As a transmitter it can cast simultaneously to up to four additional SKAA systems, amps or headphones for single or multi-room use.

The FS-S65 (6.5-in driver) and FS-S8 (8-in) powered subwoofers boast the versatility of wired and universal wireless connectivity. They receive SKAA wireless audio signals from the FS-252 active bookshelf speakers, the STA-200 integrated amp and the upcoming Gatecrasher3 active multi-room soundbar. The subs also feature RCA line inputs and outputs for maximum value and versatility which is missing from most other wireless subs.

Both a SKAA receiver and transmitter, the STA-200 compact integrated 200W Class D amp drives traditional passive speakers and can also be used with active (self-amplified) speakers. It easily connects to an array of analogue or digital audio sources such CD players, TVs, smart phones, tablets, computers and more.

“Understanding the needs of both the consumer and home technology professional, Atlantic Technology has ushered in a whole new era of multi-room audio with this SKAA eco-system,” says Paul Muto of Muto Communications, Atlantic Technology’s global PR agency-of-record and spokesperson. “Today and in the foreseeable future, the entire family is tapping the WiFi network for entertainment, computing, automation – you name it. Atlantic Technology’s SKAA products are easy-to-use, free up the WiFi network and deliver greater performance, making other wireless multiroom audio solutions on the market truly pale in comparison.”

Additionally, the free SKAA .cmd app gives a transmitter customisable multi-room operation such as setting up group control or selective speaker muting around the home. The app is available for iOS, Android, Mac and PC.  Find it at www.skaa.com/tlc/, the Apple App Store and Google Play.