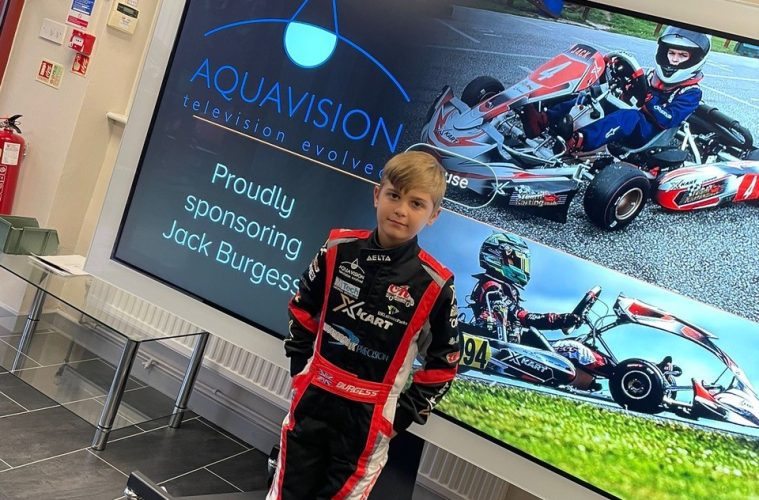 A budding go-karter is turning his dream of a career in motorsports into a reality with the support of Aquavision.

The company has been supporting 13-year-old Jack Burgess for the past year and is delighted to continue to sponsor the young driver as he goes from strength to strength.

Jack, a student at Great Academy, Ashton under Lyne, was diagnosed with ADHD and Tourette’s syndrome when he was seven. Over the years he has developed a real passion for cars and racing. So, when he was finally tall enough to be allowed to get behind the wheel of a go-kart at his local track it was like a dream come true.

His natural skill helped him to progress quickly and now he is the fastest cadet at the track, beating both juniors and adults.

Jack’s mum Gemma says, “Without the support of Aquavision, Jack would not have been able to continue with his dream of a career in motorsport, so we as a family will be forever grateful. With this help Jack has been able to progress and do so very quickly.”

Although Jack has only been racing for a year, he has been offered a place on the Factory Team for X-Kart.

The invite came after Matty Street of TeamKarting in Rochdale saw Jack’s incredible speed on the track. Like Jack, Matty has ADHD and was keen to help the young karter achieve his dream of becoming a professional racing driver.

Alastair Benn, Aquavision Managing Director says, “When Aquavision decides to support a charity, we ask all our staff for feedback to get their take on it, and this was a yes from all of us. We invited Jack and his mum to come to visit us to chat about what Jack’s ambitions were and when he arrived, we knew it was right for us. He and Lenny, our office dog, hit it off straight away so that just sealed the deal!”

Jack’s highlight this season was taking third place in the CKC/JKC Championship, a national event which saw him competing against some very experienced drivers.

Gemma adds, “We as parents are very proud that he was able to be in the front pack with these guys, even taking a second place in one if the heats which was amazing to watch.”