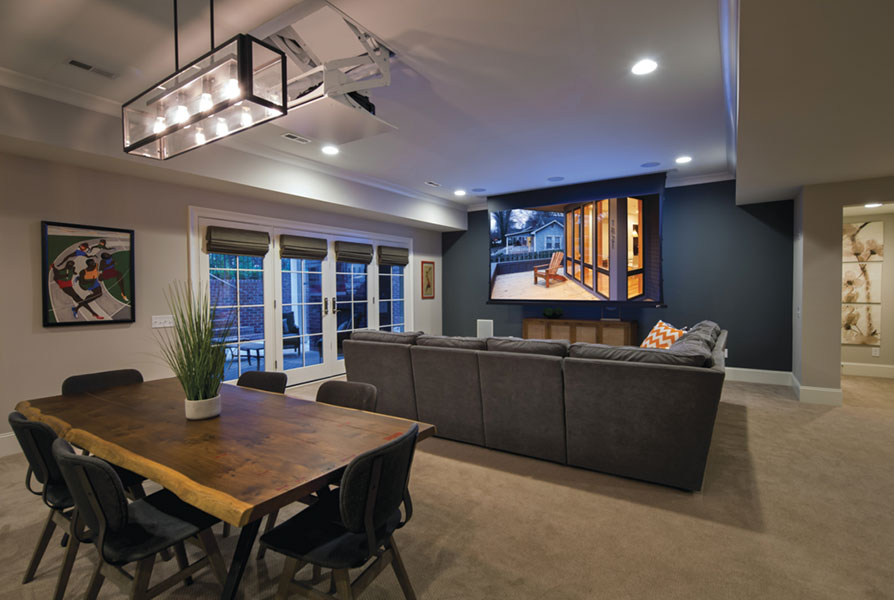 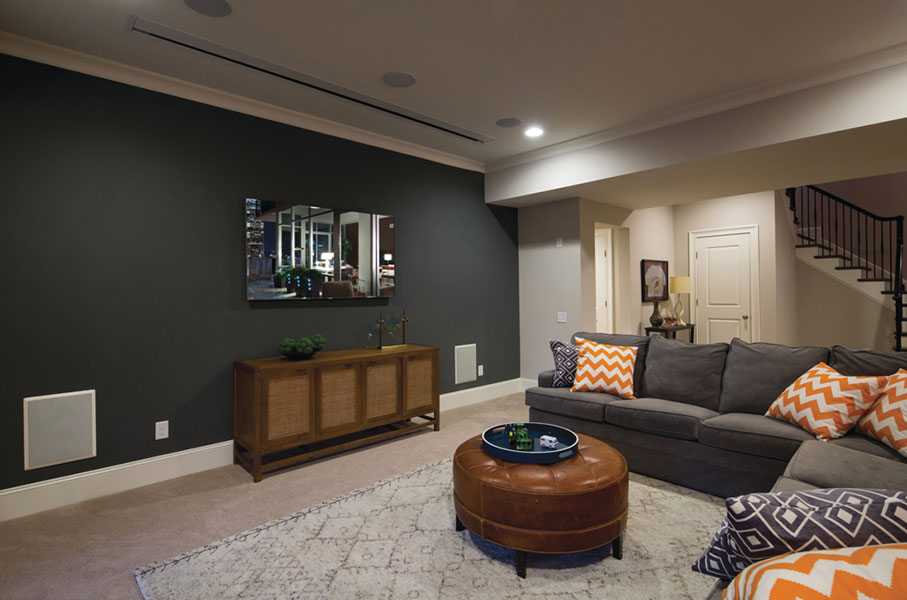 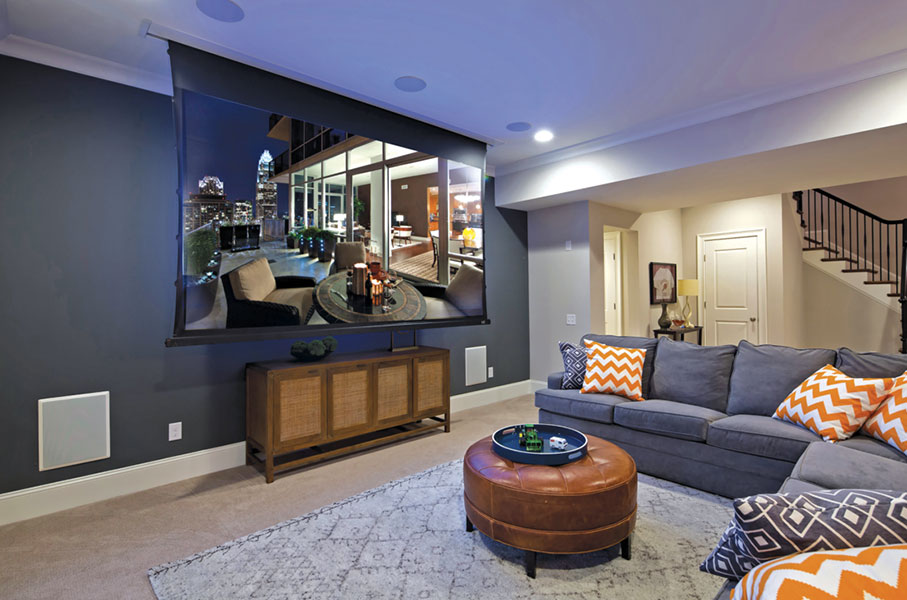 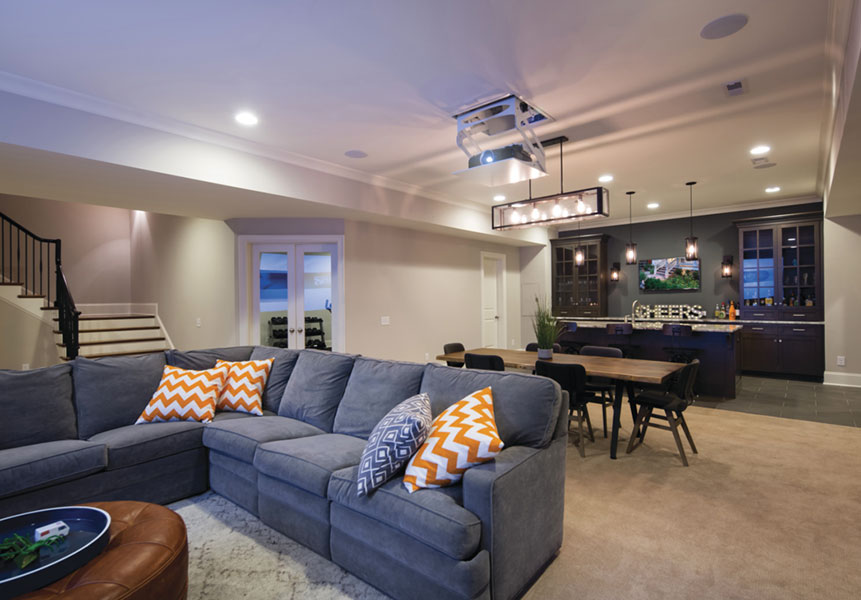 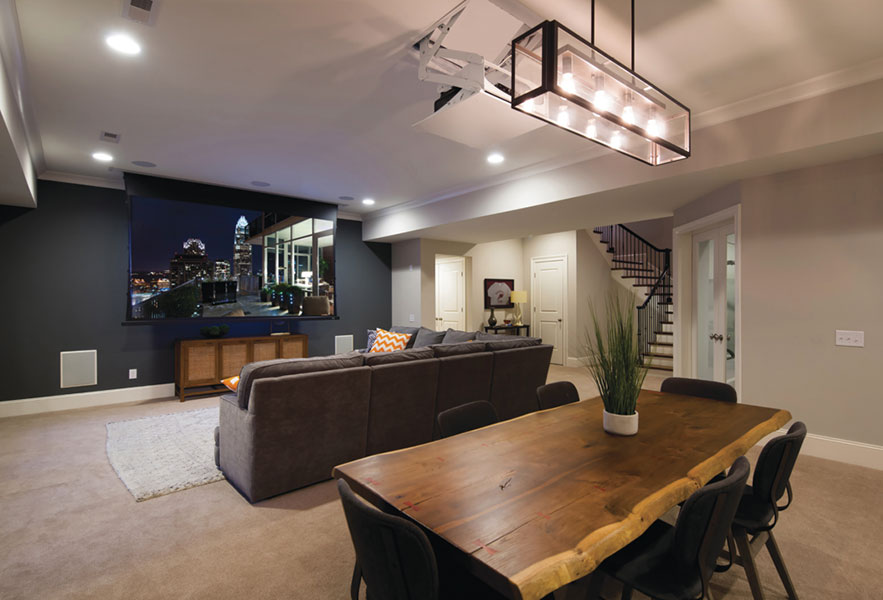 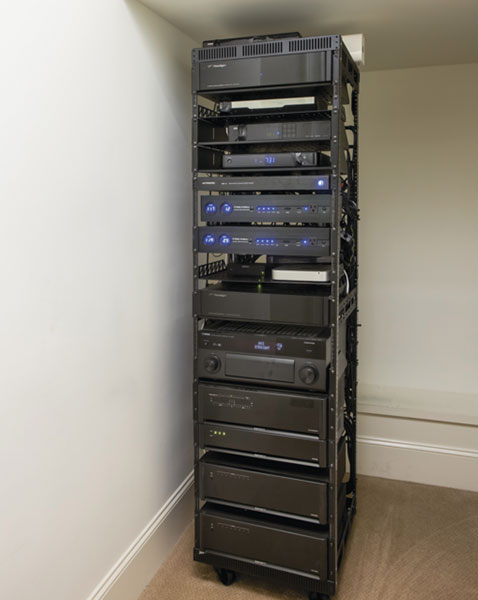 Those with young children know that there is nothing they won’t touch in the home, with childproofing things like stairs and cupboards commonplace. But how does one go about protecting one’s home theatre from their little darlings?

Integrator Bryant Moore of Moore Audio Design had an idea for one client who had this exact request.

Rather than risk damage to an expensive home theatre system planned for the lower level of their new 10,000-sqf home, the owners contacted home systems integrator Bryant for his advice on how to have a stellar, high-performance entertainment setup in an area where their kids would likely be kicking around a ball or having pillow fights, without worrying about someone breaking a piece of valuable A/V gear.

One of the ideas was to  hang several flat-panel TVs on the wall akin to what you’d see at a sports bar. Cool, yes, but it held no appeal to the homeowners who were concerned about having a pricey A/V system out in the open around their playful progeny of preteens. The second idea was to hide all of the video components.

“Concealing a video projector and a 120-inch screen in the ceiling and speakers behind the walls was a completely new concept to the homeowners, but after I explained it, they thought it made perfect sense for their entertainment style and active family,” Bryant reflects.

The design would not only protect the gear from rough-housing, but would allow the family to use the room for activities besides watching movies. When the projector and screen lower from their hiding spots in the ceiling, the room transforms from a casual entertainment area to a high-caliber home theatre.

In the theatre’s hideaway mode, the family often converge at the adjacent kitchenette at the other end of the room where a sliding glass door leads to a patio and swimming pool. Or, the kids might play a video game or watch cartoons on a 65-inch high-definition Samsung TV that is mounted to the wall in the theatre area, while the adults catch a sporting event on the 40-inch Samsung display on the wall in the kitchen area.

“The TV is what gets used when the parents are away and a babysitter is in charge,” says Bryant. “We’ve had clients who have had the lens of their very expensive video projector crushed by a bat swung by a neighborhood kid — no joke. Motorising the screen and projector to enter the room only when the parents are home will prevent this from ever happening at this house.”

Because the owners had put the multipurpose media room on the drawing board before construction of their home had begun, Bryant and the builder, Simonini Homes collaborated closely to ensure proper ceiling clearance for the client’s Chief motorised lifts, Epson projector and the Slate screen from Screen Innovations.

There was also plenty of room worked into the design so that five Paradigm speakers could be recessed into the ceiling and two Paradigm subwoofers tucked into the walls.

Of course, the theatre would need processors, receivers, switchers and other components to provide the family with engaging A/V content, so Bryant worked a roomy, well-ventilated equipment closet into the blueprints, as well.

This area is where Bryant and his team spent a good chunk of time configuring the Savant system that would operate the A/V equipment in the multipurpose media room and distribute video and audio to 11 other TVs and 13 pairs of RBH speakers.

To make it simple for everyone — kids, adults and babysitters — to enjoy the A/V setup, Bryant programmed the Savant system to streamline the process of selecting something to watch and choosing where to watch it (65-inch TV, 40-inch TV, or the 120-inch projection screen) to a simple tap of any iPad or smartphone that’s nearby.

A Savant App presents the video options — three cable boxes, a Blu-ray disc player and two Apple TV boxes. A user simply touches his or her choice, selects the displays to which they’d like the content sent, and the Savant system carries through the command, lowering the projector and screen from the ceiling if necessary. In seconds the home theatre and other entertainment zones are humming with great A/V.

More on the Entertainment Docket

The Savant system is capable of much more than supervising this multifaceted entertainment system, however. It can control lights, thermostats, motorised window shades, swimming pool pumps — you name it. The family is perfectly content with how the systems in this space work together to create a sensational entertainment experience that will last them a lifetime, thanks to a solid protection plan from Moore Audio Design. Soon lighting controls will be woven into the Savant system, too.

“We selected a budget-minded yet bright projector and a light-rejecting screen to combat any light that’s on or sunlight that’s streaming through the glass doors, but having the ability to dim the lights from the Savant app will add to the ambiance and enjoyment,” says Bryant.

Plugging the media room light switches into the system will require nothing more than a few hours of programming time to add one more layer of convenience and enjoyment to this family-friendly, multipurpose entertainment hangout.