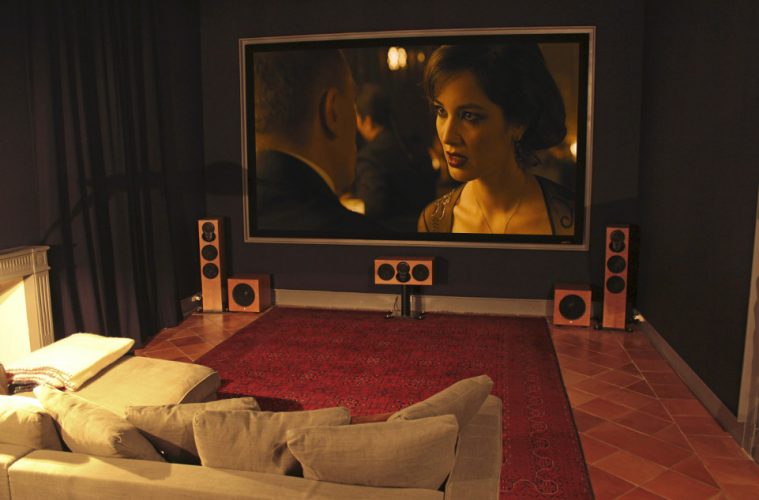 UK-based Finite Solutions was recently tasked with turning a games room within an impressive 16th century Chateau near Bordeaux in France into a dedicated home theatre for his family to enjoy.

“The client is from France, saw our case studies on our website and contacted us to have a similar system installed in his place in Bordeaux,” Finite Solutions’ marketing executive Said Tezel tells CE Pro Europe.

“Being a real music and movie fan with a large collection of films and albums, our client already owned a Linn system and wanted the same high level of quality he was used to for the new cinema.”

This set the precedent for the level of performance the new home cinema had to deliver.

“A system capable of nothing less than breathtaking performance was what he desired,” Said states. “Both the image and sound quality had to be truly remarkable.”

However Said was not phased, as this type of project is exactly the kind Finite Solutions specialises in. “There were many aspects to this project that are common to the type of cinema build we undertake regularly. Not only were the necessary home cinema components installed, we also designed two levels of staging for the seating and all of the walls were covered with sound deadening material and finished in fabric.”

This not only gave the room a ‘commercial’ cinema feel, but it also ensured that the enjoyment of the cinema did not effect other people in the property, as sound leakage is minimised. The dark material also improves the image quality on screen as less light is reflecting around the room and back onto the screen.

Using what Said calls “some of the finest components available,” Finite Solutions set about turning the client’s vision into a reality.

With the client already being a fan of Linn speakers, using them again was a no brainer for his home cinema.

This was coupled with an Anthem AVM 50v surround sound processor.

“Whether you are listening to a delicate passage in a piece of classical music or being whisked along by the exciting soundtrack of the latest Batman movie this system can effortlessly handle anything you play on it,” Said enthuses.

The client has over 400 DVDs, so Finite Solutions suggested he invest in a media server. However the client stated that he enjoys the process of unboxing his film discs, so no media server was used.

“After we had made our calculations and produced a detailed design of the room we concluded that a 3.5m wide screen was best suited for the throw of the projector and the room size,” says Said.

The high end Oppo Blu-Ray player means movies in HD and 3D can now be enjoyed.

“Being a real music and movie fan with a large collection of films and albums, our client already owned a Linn system and wanted the same high level of quality he was used to for the new cinema”

Control 4 was used in this installation to give the level of functionality and ease of use needed.

Both the Control 4 7″ touch screen controller and the Control 4 SR250 remote control were used in the cinema, giving the client two different and straightforward means of controlling the system.

A Lutron Grafik Eye was chosen to control the lighting in the cinema.

“For example lets say our client wants to watch a football match on Sky Sports 1 HD: when he walks into the room all the light are on, he simply presses the ‘Sky Sports 1′ icon once and all the home cinema components turn on and switch to the correct configuration,” Said explains. “The lights dim to our client’s preferred level and the football match comes on in glorious HD. Bringing all of these technologies together under the Control 4 unit results in simple and efficient control of the entire room.

Said points out that the location of the project in Bordeaux, France made remote management a true challenge, which is another reason Linn speakers were selected, as the team only wanted to specify reliable, tried and tested equipment.

“Our engineers made five to six different trips on site during the room build stage – for instance getting cabling around room without cutting into 16th century walls, so the cable was run under fabric covering,” Said reflects.

“Also, the building of the seating tiers remote and with cabling for table lamps and step lights was challenging. The remote connection of the property made decent Internet connection speeds for streaming impossible. So streaming services were not an option!”

Despite the impressive array of technology packed into the home theatre, Said admits that his favourite part of the project is the bespoke fabric covered the walls. “There are no reflective surfaces in the room and there are external shutters blocking any incoming light. This means absolutely full blackout.

“Plus, there is absolutely no reverberation. The room is very ‘dead’ and very dark so the focus is entirely on the cinematic experience.

“I also like that there are different seating choices on each seating tier, which means every row has a unique blend of personality and way of experiencing the big screen.”

Said reports that the client is “very pleased that he decided to convert his games room into a dedicated cinema and feels it is a much better use of the space. The solution we have provided for him delivers all the quality and functionality he wanted and much more. He spends lots of time enjoying the cinema and is continually thrilled and surprised with the system’s outstanding level of performance.”

More from Finite Solutions below.