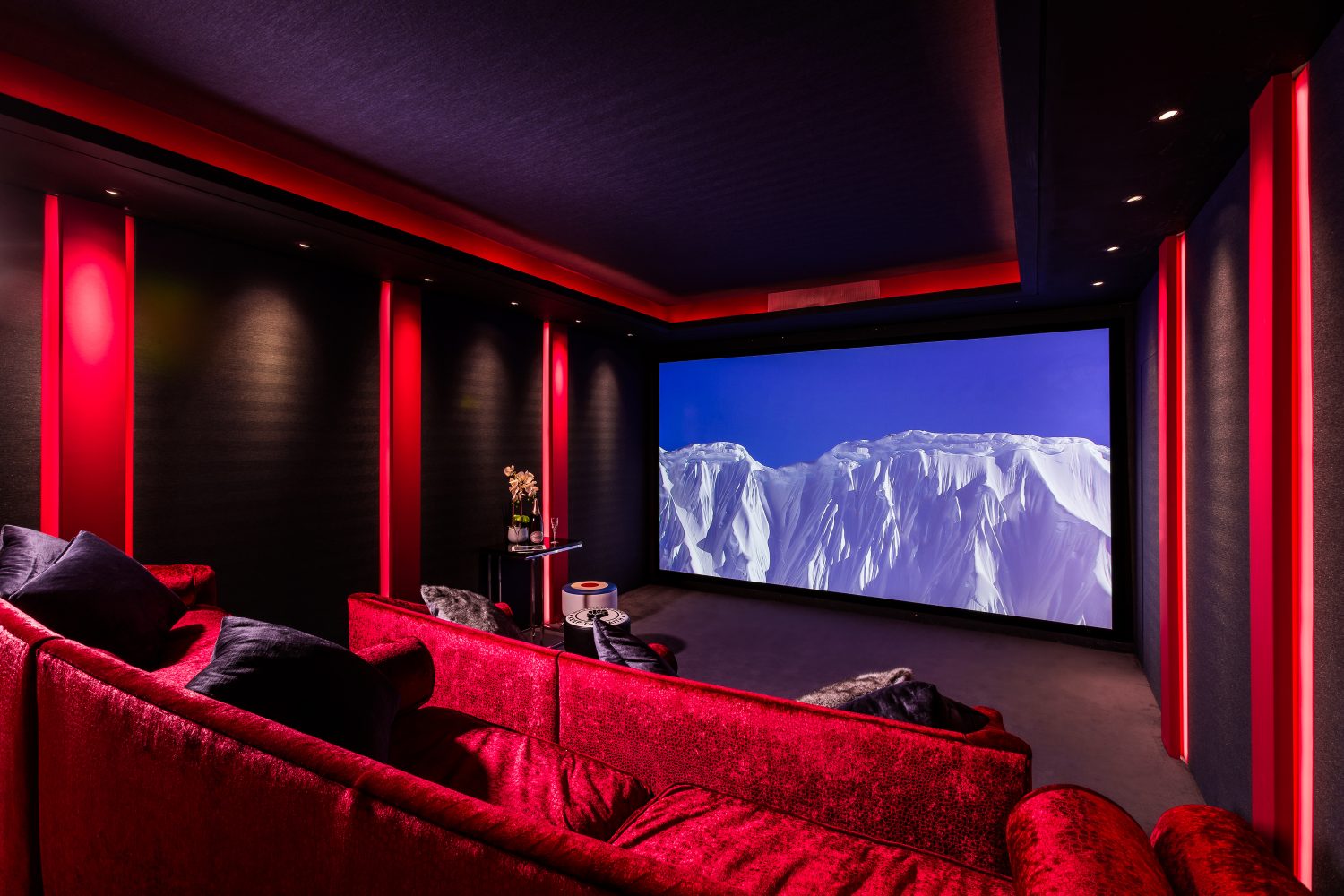 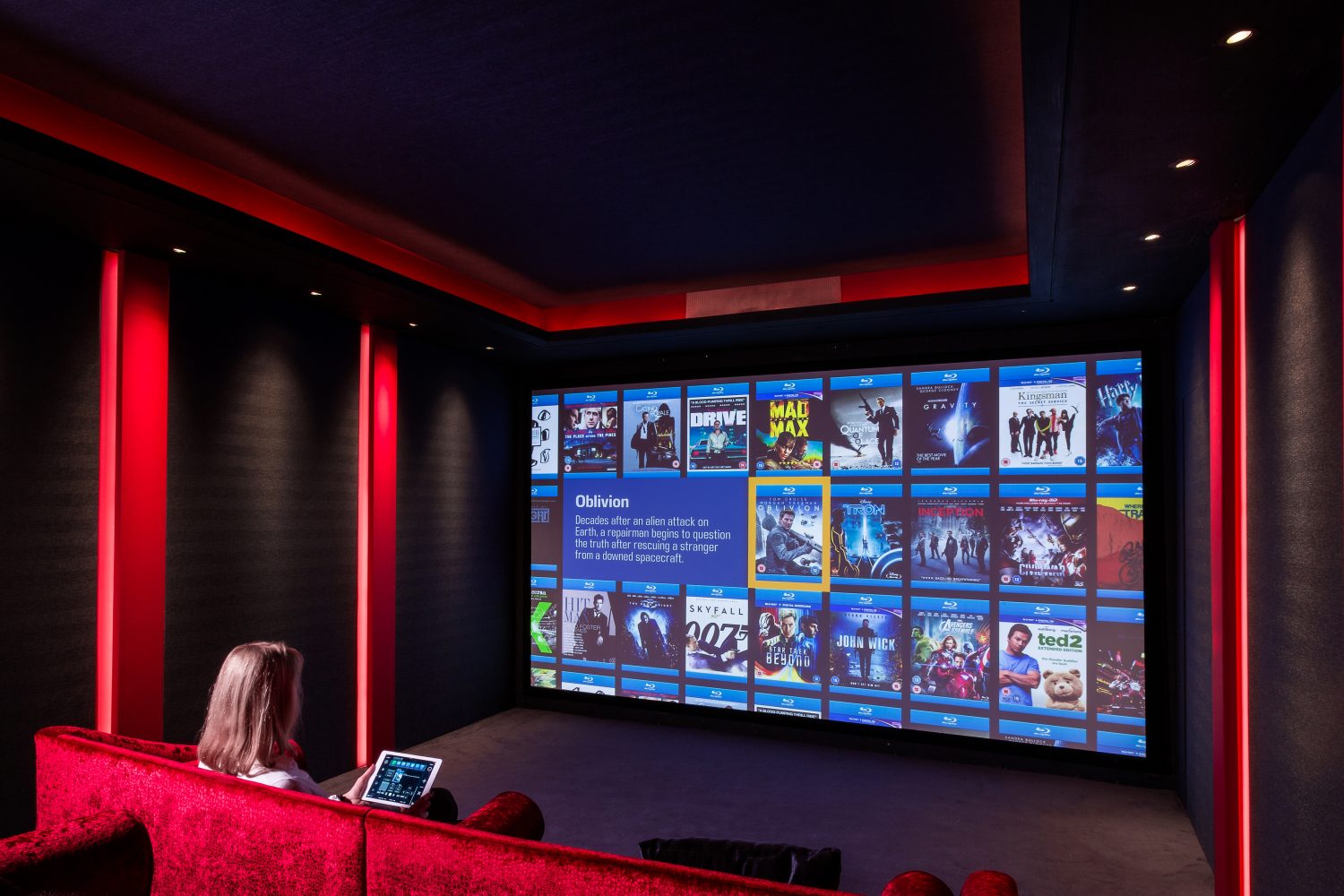 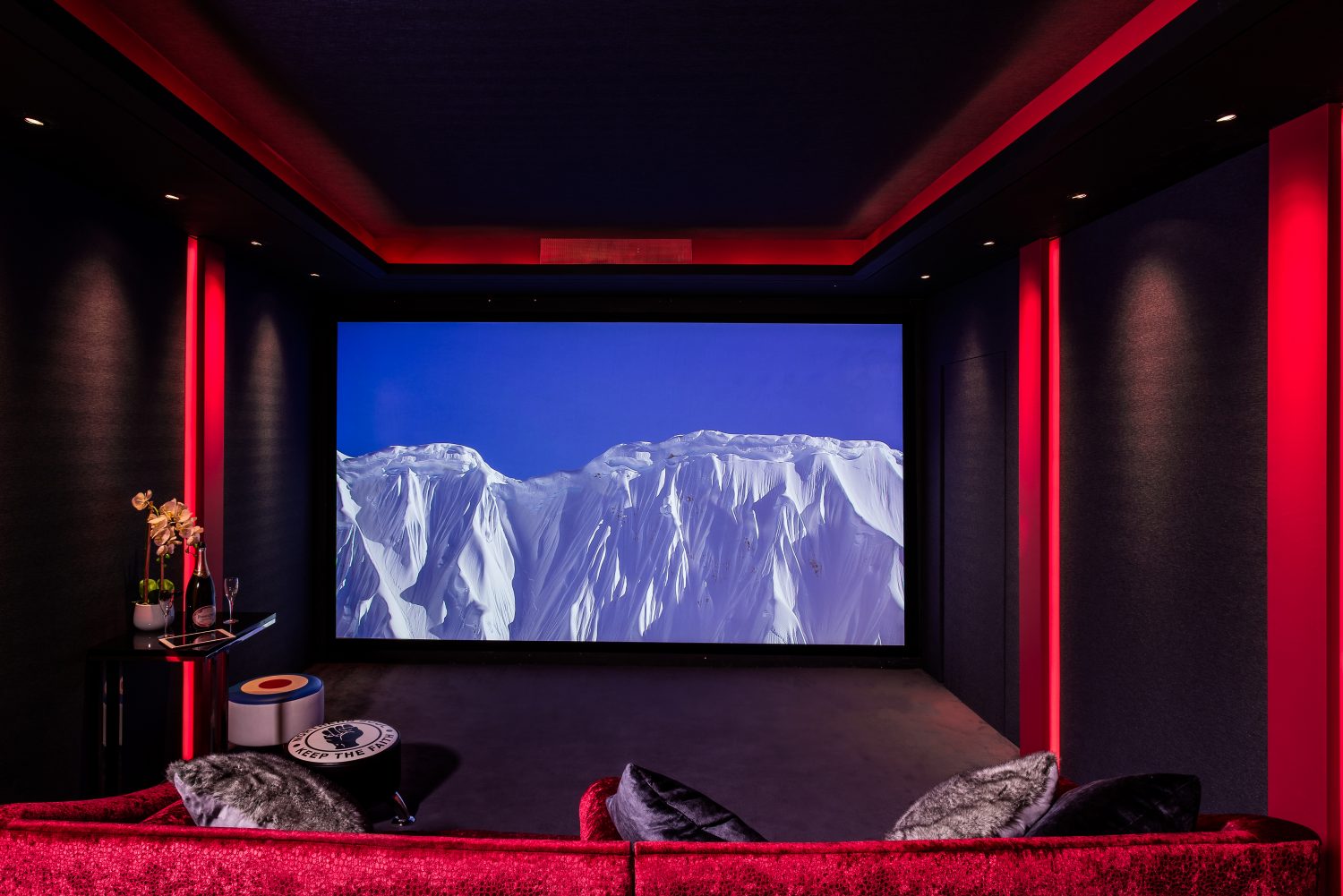 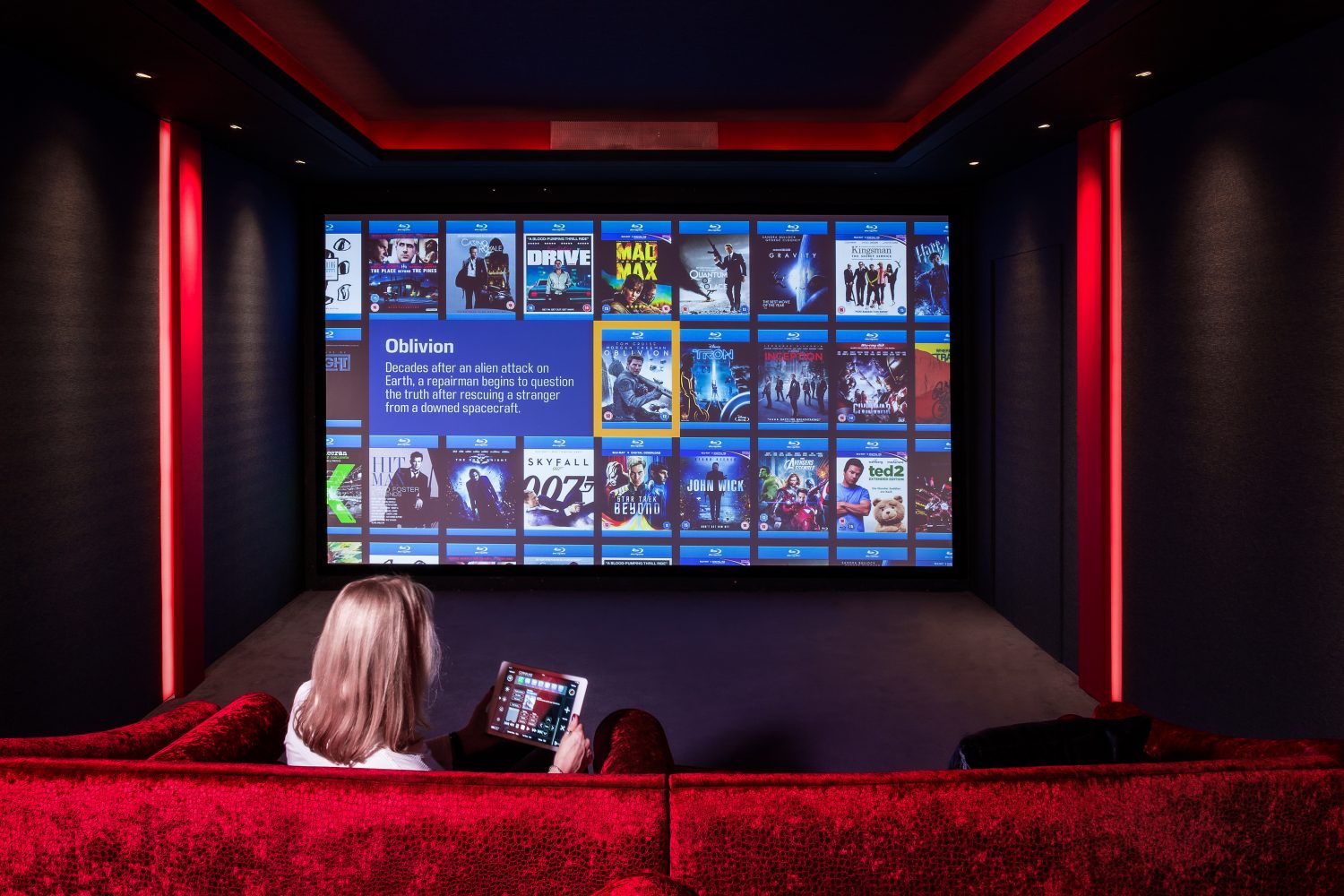 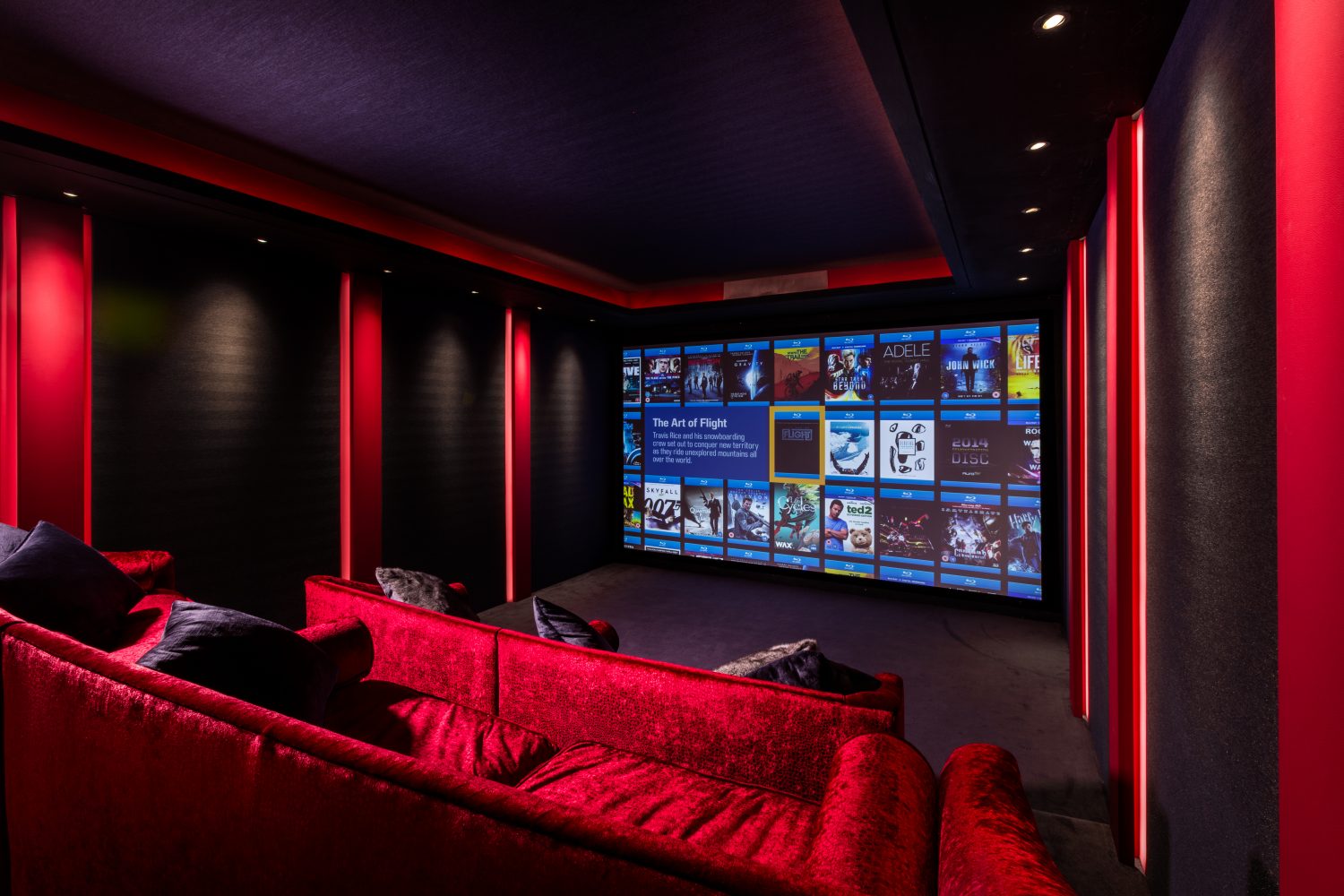 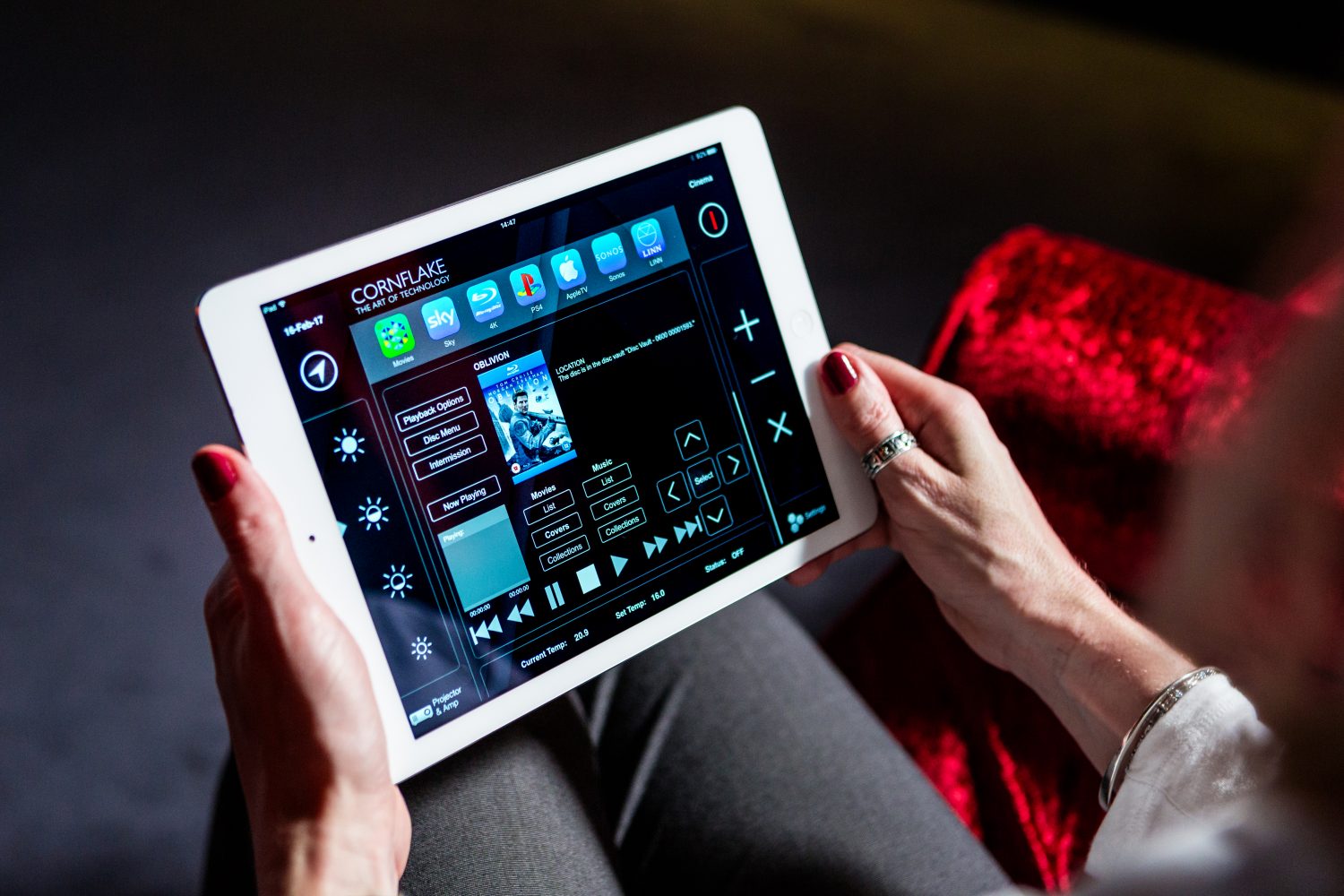 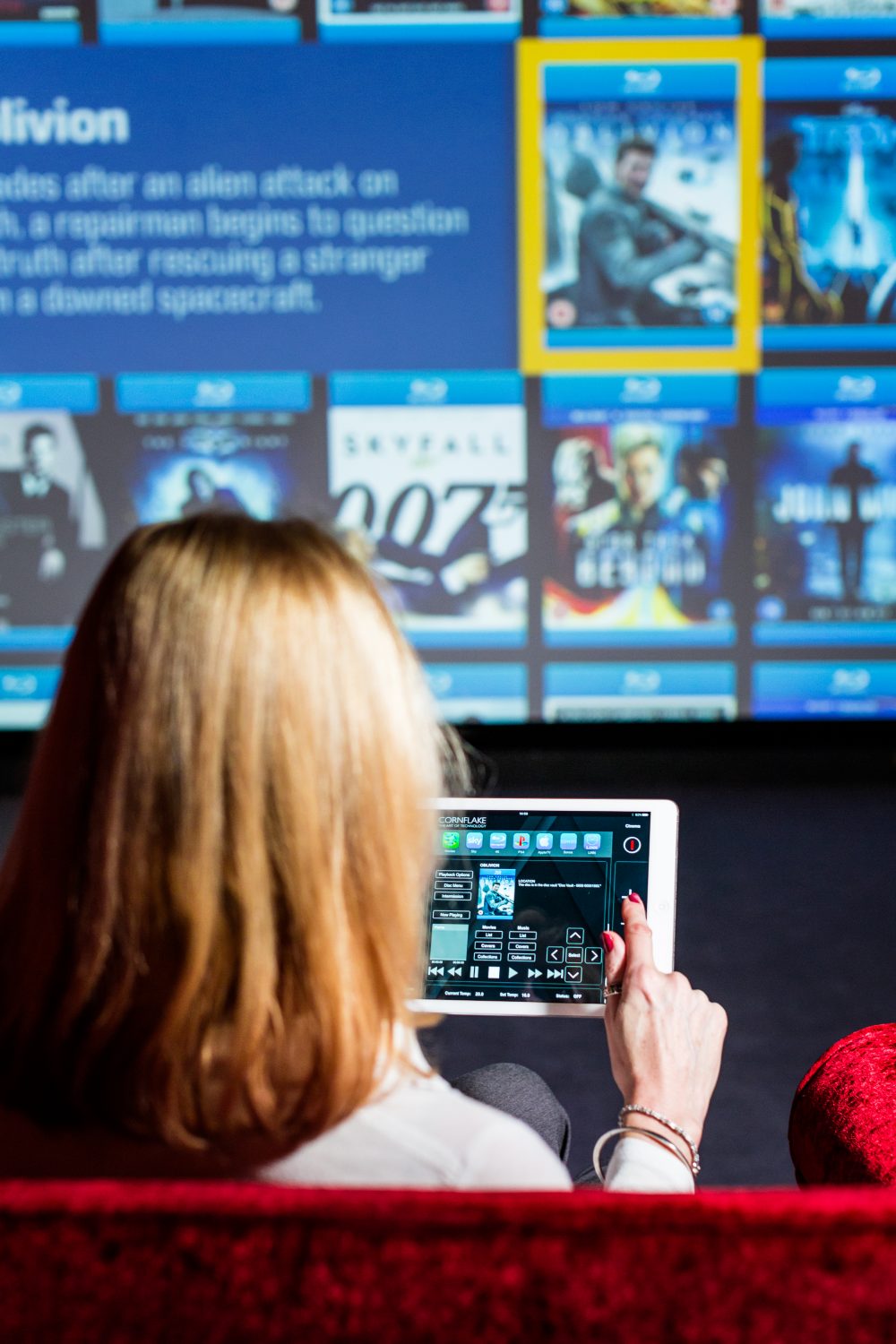 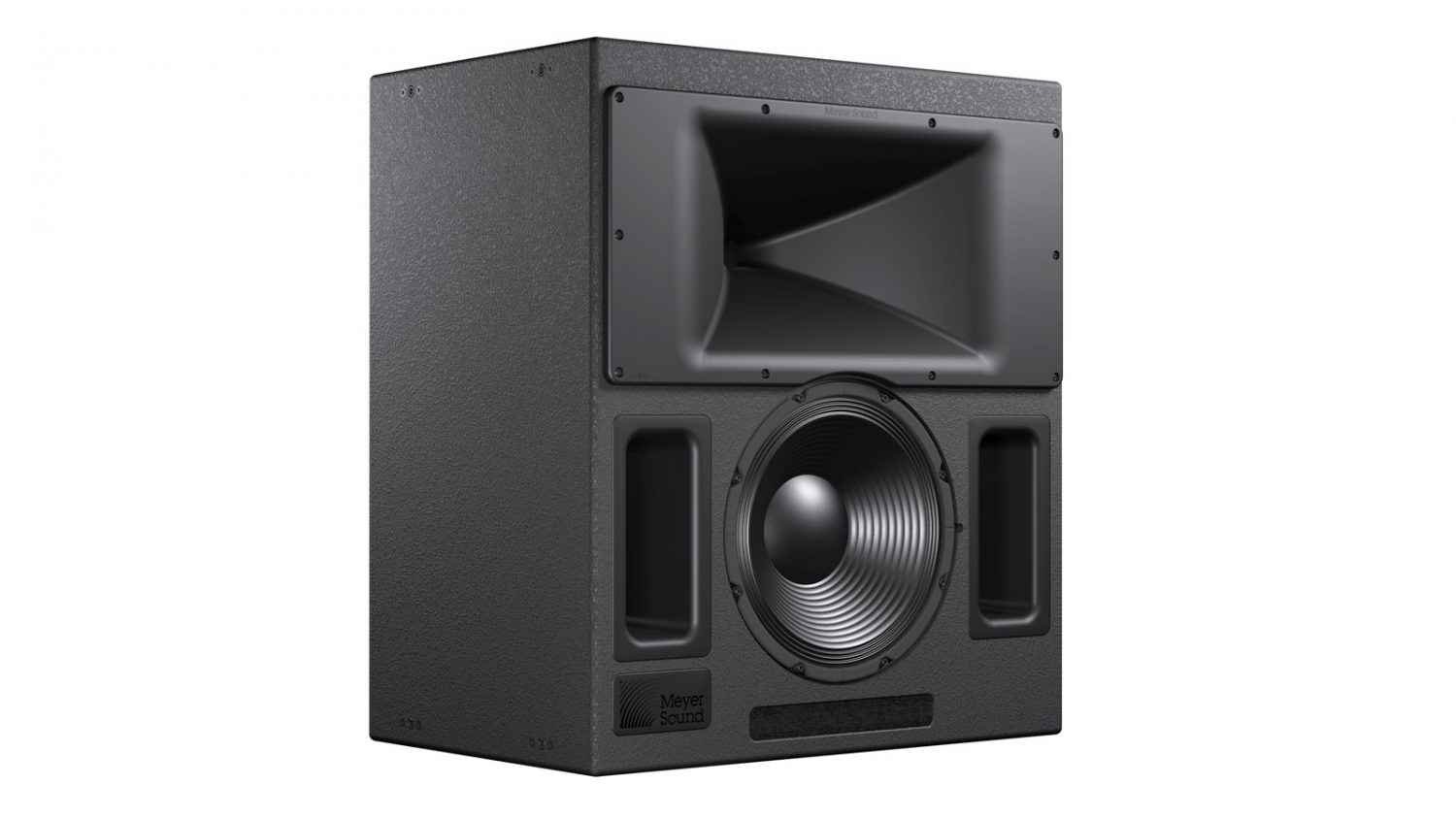 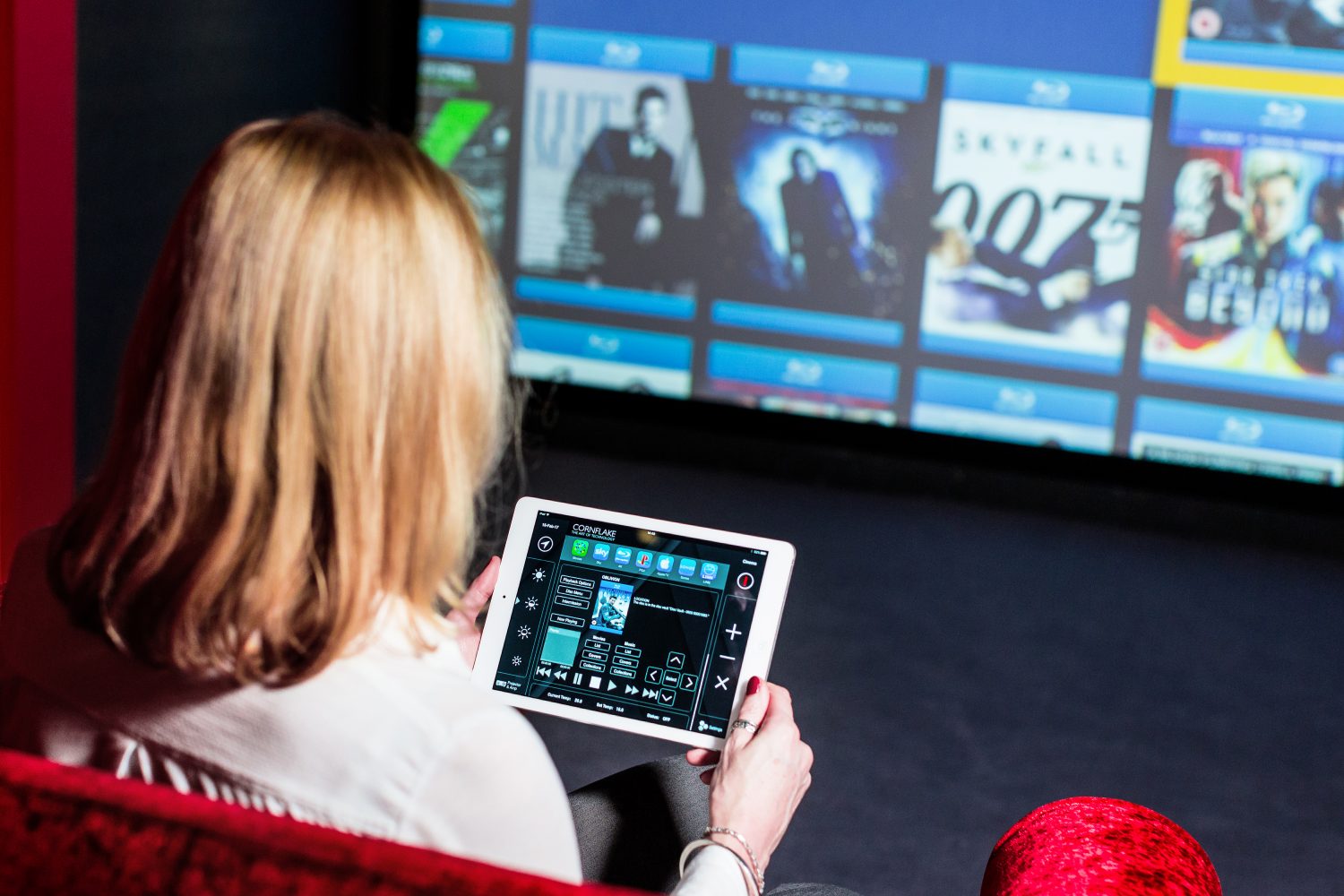 Something new has come to Cornflake’s slick iPad-controlled, 4000sqft experience centre in the middle of London – well, two news things. Although designing and creating home theatres isn’t exactly new for the successful integration company, Cornflake is sure to make an impression with its latest project, installing the first ever residential Meyer Sound system in the UK.

Well known for its huge line array hangs at arenas, as well as its loudspeakers being installed in a plethora prestigious Hollywood sound-editing studios and in large commercial theatres, Meyer Sound only hinted at its entrance into the residential sector last August when it quietly announced that it would be presenting exclusive demonstrations of what it called ‘the ultimate private cinema experience’ at CEDIA 2016 in Dallas. That’s not to say that the predominantly commercial manufacturer hasn’t been involved in residential before, as a number of Hollywood directors and producers are known to boast Meyer Sound systems in their home cinemas.

However, with this UK install and working partnership with Cornflake, it’s not just Hollywood’s elite that can get their hands on a Meyer system at home: now cinema-lovers in England (albeit with very large wallets), can too.

Added to that, Cornflake has now been announced as Linn dealer, as demonstrated by the centre’s new Linn Lounge, which boasts a pair of stylish 530 speakers complete with Exakt electronics, 300 W of power amps and an Isobarik bass system.

“Linn is superior to Sonos,” Peter Miller, Cornflake’s HiFi consultant told CE Pro Europe. “We just need to show customers the difference by letting them hear it for themselves. We really want to push to have more of our products being diagnostic. Sonos doesn’t offer us that; we can see Sonos on a network, but we can’t talk to it. We can with Linn.”

Peter reinforces that fact that Cornflake is the first company in Europe to have a full residential Meyer cinema. “And I believe we are probably the first CI company to have Linn in a showroom,” he adds. “Linn wants to break into the residential CI market; it is a good fit. They’ve got the engineering prowess and certainly the infrastructure to start making products that are more geared towards us as a CI industry.”

Inside The Meyer Sound Cinema

CE Pro Europe is led into an (from the outside), unassuming 3.6m x 5.7m room, which Cornflake has crammed with high-end technology amounting to £250,000. Sinking down into a red, squishy sofa, the eye is immediately drawn to the floor-to-ceiling DT-Screens monster floor-to-ceiling multiway auto-masking screen.

The £120,000 Meyer Sound 9.2.4 Dolby Atmos surround system comprises nine HMS-5 speakers strategically hidden in the walls and ceiling, with two X-800C subwoofers at each end of the room, with four Acheron Designer speakers at the front.

The wall speakers (HMS-5s) are so large they could not fit squarely within the existing wall cavity, so the design team created clever angled niches within the studwork to house them. Powering the system is a Trinnov Altitude 32 processor, ready for Dolby Atmos, DTS:X and Auro-3D.

Being the first residential Meyer Sound install in the UK, Cornflake is playing a key part in putting the traditionally commercial manufacturer on the home theatre map. Anyone visiting Cornflake’s newly kitted out theatre will immediately see how serious the integration company is about doing high end home cinema; it’s not just the screen, the speakers or the processor, it’s the entire process of bringing this room together.

“We have done cinemas before, but we wanted to improve our offering,” says Peter. “After meeting with Meyer we knew that they were the company we should be using; their products are all in the digital domain – they’re all active. We can see exactly what’s happening with each speaker.”

And Cornflake is not just thinking about the speakers themselves, the company also considers the environment the products live in. “We believe what we have brings a commercial mastering level to the residential arena, and we are proud to be the first company in Europe to do so.”

There’s no getting around it, a Meyer Sound residential system is in the top price point, so how does Cornflake think its (typically wealthy) customers will respond to this?

“We think it’s a breakthrough as a cinema. We are going to have to almost reinvent Cornflake and market it in a different way because this cinema is roughly a quarter of a million pounds, so we have to gear up about being serious about doing cinemas and cinema design,” Peter answers.

“It’s a great arena because it’s never been as enjoyable as it is now with films, with 4K, etc. Meyer will be the high-end solution we offer; we will use other brands for other price points,” he clarifies. “Trinnov and Meyer are the high end solutions we will offer.”

“We want to be the best residential cinema in Europe,” asserts Cornflake director, Gary Lewis following an impressive demo (Game of Thrones in Dolby Atmos, a live performance by Ed Sheeran and an action-packed sequence from 2014 film, Lucy). “The Trinnov amp will replicate the Auro 3D layer,” he adds, “and we waited for this projector because we needed one that was good enough; plus space is at a premium in most home theatres, and this is the smallest 4K laser model in the world.

“Clients are getting harder to impress,” he admits. “But this is the next level in terms of audio and visuals. Subterranean living is big at the moment, with lots of people using or creating a basement for a home cinema. If they pay for the space, they are certainly going to want high-end equipment to go in there. It is expensive, but it’s the best they can have.”

“Demand for home cinemas is phenomenal, especially in London where many home owners have excavated a large, and often dark, basement to create extra living space, which is perfect as a media den,” agrees Robin Shephard, CEO of Cornflake.

“Clients strive for acoustic and visual perfection and are prepared to invest substantially in high-end technology to ensure exquisite quality, combined with luxurious decor. Some of the private cinemas currently being built in London homes rival those found in Hollywood A-Listers’ pads, complete with motion-sensor seating, air conditioning, acoustic insulation and professional calibration. We’re currently building an IMAX cinema in a Kensington townhouse and have a waiting list of clients wishing to road-test this new room.”

The £13,000 DT-Screens 3.6m x 2.02m bespoke screen was commissioned to virtually cover the front wall. Designed with multiway masking that comes in from both the top and bottom of the picture, the screen frames the content and blacks-out the unwanted portions when watching in an aspect greater than 16:9 ratio. The screen recognises the format of any film or programme and auto-mimics the ratio, then masks accordingly.

The compact £30,000 JVC 4K DLA-Z1 projector has a laser light source (Blu-Escent) capable of delivering a brightness of 3,000lm. A 100mm extra wide diameter lens (conventional lenses are 65mm) enables the machine to project 4K resolution to every corner of the screen, complemented by five dispersion lenses to ensure precise projection of 4K resolution graphics.

A mix of hard and soft CATS (cinema acoustic treatment system) panels were used in a carefully modelled pattern across the walls and ceiling, topped off with acoustically transparent fabric.

Lighting is controlled with the swipe of an iPad, which has been pre-set to dim in tandem with the film starting.

“We’ve used a selection of fittings to emphasise the various elements of the design,” elaborates consultant Mark Kavanagh, of Future Light Design. “For the soft, low level lighting, the ceiling has had an LED tape light installed within the coffer with CRI (colour rendering index) of 95 to enhance the warmer tones in the furnishings, and particularly complement the vivid red leather-clad columns, just as the colours would appear in natural daylight.”

Linear lights were set within recessed profiles around the perimeter of the room. For the ceiling, down-lighters finished in the exact same RAL emulsion colour were commissioned, making them almost invisible.

“The goal of all this technology is to envelop the audience and transport them into the story; the viewer really shouldn’t be thinking whether a sound is coming from an overhead loudspeaker or from a side wall,” comments Andy Willcox, Meyer Sound’s, global sales manager for residential.

“Private cinema installers now have the capability to provide a superior experience for their customers. With digital soundtracks freed from the limitations of analogue reproduction, it is possible to create heightened experiences in a scalable personal environment. We are very excited to be working with CEDIA-approved cinema designers, such as Cornflake, to spread our pro expertise to a wider residential audience.”

Visits to the new cinema are strictly by appointment and must be pre-booked.