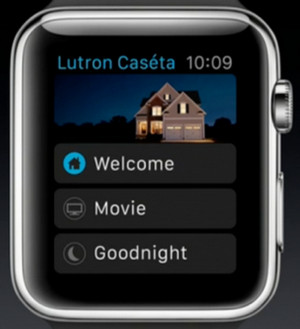 Crestron Electronics has been less public, but they have one, too. So does start-up up Peq from Smart Home Ventures.

Now that Apple Watch has launched, developers are scrambling to be the firsts in their categories with Watch-friendly apps in order to enjoy a small window of buzz-worthiness before everyone else is doing it.

So far about a half-dozen purveyors of smart-home systems have announced Apps for the hip new wearables – and more will follow.

In fact, all of them will follow, sure as they did with iPhones and Android.

After we make a big deal out of the first batch of Apps, the followers will get a little asterisk that says, *yeah, they have a Watch App too.

Early out of the gate were Lutron and Honeywell, which starred in Apple CEO Tim Cook’s September 2014 demo of the new Watch.

The organisation is enabling customers to use their iOS and Android devices to unlock Aloft and W hotel doors via Bluetooth (BLE) with their smart devices – now including the Watch.

Lutron is Watch-enabling its Caseta wireless lighting control and Serena motorised shades, which connect to the cloud (and ultimately the Watch and other smart devices) via the company’s Smart Bridge and Smart Bridge Pro gateways.

During last September’s Apple event, Tim Cook showed a Watch App that alerted the wearer, “It looks like you left home and your living room lights are still on.”

An option to “Turn Lights Off” could solve that potentially catastrophic issue right then and there.

“We’re certainly incredibly excited about the whole new direction in wearables being an ability to control your environment,” comments David Weinstein, Lutron VP of residential sales, during a CES panel discussion in January, moderated by CE Pro’s Jason Knott.

“Where do I see it going? Just based on Apple’s incredible brand recognition and people being drawn to the brand, I think people are going to want to invest in that technology A) for fashion; B) for convenience; and C) for connectivity. As an example, not only can you control your lights and shades from your phone, with simple touch control; if you pull out of your driveway and left your lights on, you’ll get a message from Siri. And a comment saying: You left your lights on in the kitchen. Do you want to keep them on or off?

“I think time will tell, but people are going to reach for the shortest distance to have control of their environment. I think the watch is just another example of expansion of device control that will add to the basket of interfaces. I don’t believe it’s going to take away from smartphone.”

Honeywell since has introduced a complete line of security and home automation products under the Lyric brand, so perhaps we’ll see a demo of a complete Watch-controlled ecosystem at the International Security Conference (ISC) West expo this week in Las Vegas.

Lutron will be at ISC as well, perhaps showing the Watch App.

So too will Alarm.com, the SHaaS (smart home as a service) provider that powers interactive security and home automation services for more than 1.2 million subscribers.

At last year’s ISC, Alarm.com quietly showed a prototype of a Pebble Smart Watch app for home control. This year, we expect a more rousing demo of the Apple Watch App.

During its Spring Forward event on March 9, 2015, Apple demonstrated how “Dad” could open the garage door for his locked-out daughter via the Alarm.com app and a compatible LiftMaster MyQ garage door controller from Chamberlain.

And by the way, a video camera installed in the garage shows the action live. Indeed – to the father’s great relief – the garage door opened and his daughter and friend appeared.

Alarm.com supports scores of devices and services through its platform, meaning locks, thermostats, security systems, lights, sensors, cameras and more can be monitored and/or controlled via Apple’s Glance interface.

Meanwhile, Savant promises a Watch App is “coming soon” and that “activating scenes has never been more convenient.”

During a recent visit to leading home-controls manufacturer Crestron, CTO Fred Bargetzi told me to expect a Watch App soon.

The only thing holding it up is that Crestron wants to launch the App with more-than-the-usual features.

We can imagine a Watch App that is integrally tied to the in-home BLE proximity detectors.

On the DIY side, the new Peq system from start-up Smart Home Ventures is showing a watch App and has a brief but decent online demo (see below) of the Watch’s capabilities as a controller.

An official Philips Hue App is coming soon, according to that company, but back in January ArcTouch described how it developed a Watch interface for Philips Hue smart bulbs, and how it would work with Apple’s own home control platform HomeKit.

Below is a January 2015 demo of the Home Remote for Apple Watch.

When Do You Need Your iPhone?

Apple Watch Apps are built for at-a-glance alerts and quick access to simple functions such as (in the case of home automation) opening garage doors or activating a “Good Night” scene.

For most functions, the Watch requires a nearby iPhone loaded with the Apps to serve up alerts and process commands initiated via the Watch.

Plus, the watch itself has no Wi-Fi or cellular communications so you can’t do anything related to the Internet unless you have your iPhone within Bluetooth range.

Therefore, you won’t be able to control your home while you’re taking a jog sporting nothing but a Watch and wearables of the cloth variety.

Total deal-breaker in my book. Then again, I don’t have an iPhone.

Apple is in the news again, but this time for its much speculated upon ‘cable-killing’ TV Service