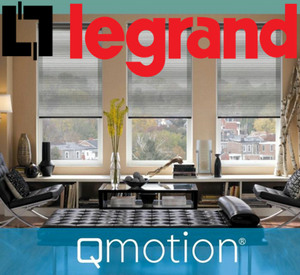 That’s on top of the progress QMotion has already made in the custom electronics market in its few short years in the motorized shading business.

QMotion was founded in 2010 by Willis Mullet, former CEO of Wayne Dalton Corp., a leading manufacturer of garage door openers.

The company began selling motorised window treatments through the custom electronics industry shortly thereafter, and by the 2015 the company claimed 27% of the CE Pro 100 integrators as customers.

Legrand is a giant in home and building controls, with international reach and an established base of customers including home systems integrators, electrical contractors and commercial integrators – a welcome audience for QMotion.

“We actually are active in the commercial market,” Cassie says, “but that’s an area we are planning to expand even further.”

Vantage services both residential and commercial properties, while WattStopper focuses on lighting and energy management for commercial and industrial installations.

“They [Legrand] didn’t have shading and we didn’t have lighting,” says Cassie. “It makes great sense.”

Legrand has always been a key player in the homebuilder market, with its OnQ structured wiring systems and communications products.

The company recently came out with a whole-house control system called Intuity that is tailor-made for that market and the dealers who serve it.

QMotion is more of a premium product – a perfect complement to Vantage controls, for example – but Metzger says it would explore ways to participate in Legrand’s broad-market initiatives.

Metzger says QMotion will maintain its relative independence within Legrand, much as NuVo, Vantage, OnQ have done.

The company will continue to maintain close ties to its other control partners, such as Control4 and Savant, Metzger says.