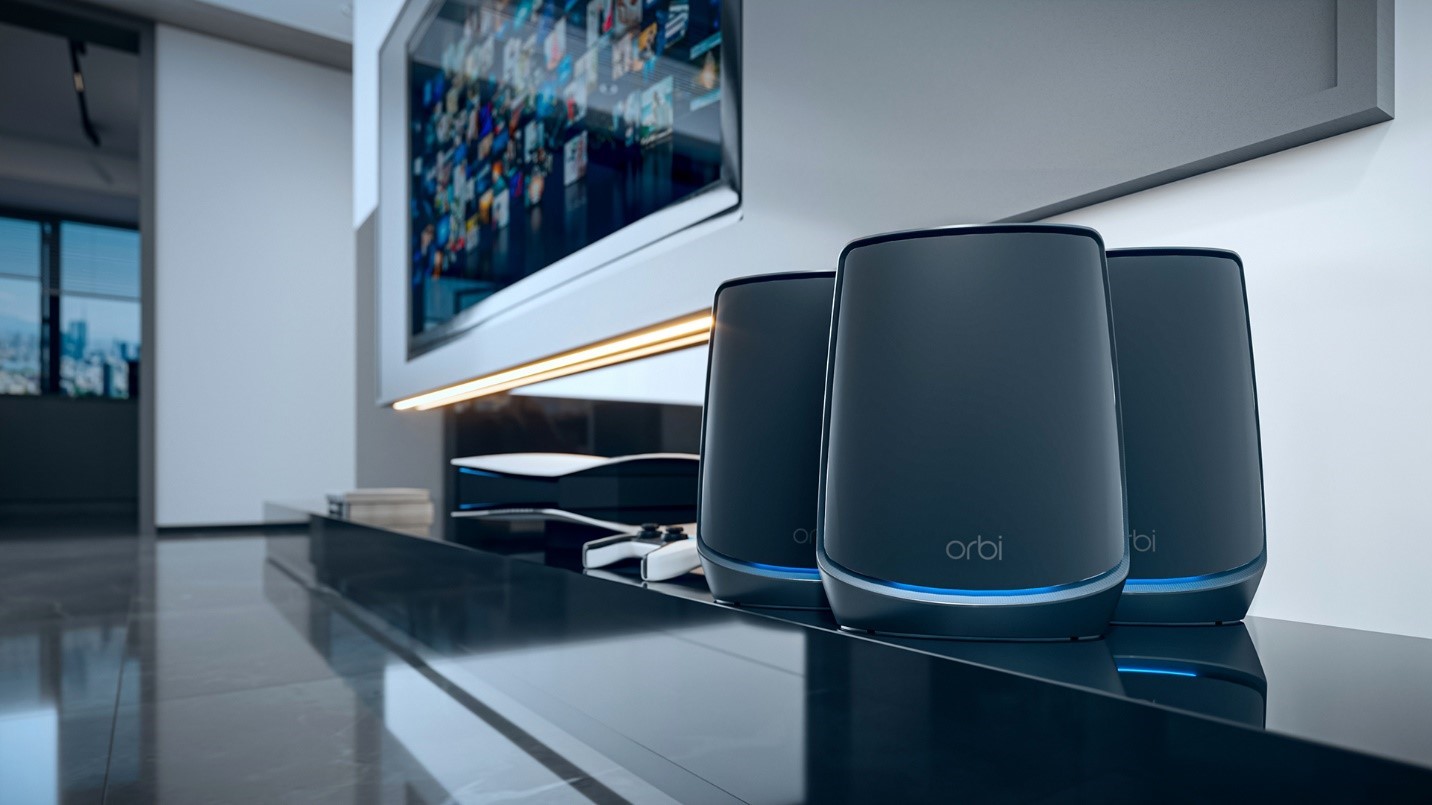 NETGEAR has launched a new addition to its Orbi line. The Orbi 860 Series builds on the Orbi 850 Series by future-proofing it with a 10Gb ethernet port, supporting multi-gig internet connections; upgraded antenna design for greater Wi-Fi performance and a bundled year of NETGEAR Armor, providing homes with an automatic shield of security against internet threats across every connected device.

With NETGEAR’s latest Wi-Fi 6 tri-band and patented dedicated backhaul technology, the powerful Orbi 860 Series mesh systems are designed to keep connections strong and running at maximum speeds in every room without slow-downs or buffering, providing families the bandwidth to address household demands even when simultaneously 4K/8K streaming, Zoom conferencing and Wi-Fi calling from a bedroom, basement or outside in the back garden. In an environment where homes are connected with Gigabit plus internet (1.4 to 10 Gigabit) and have an increasing number of connected devices – more than 25 on average – the new Orbi 860 Series has been created to provide the best experience for Wi-Fi 5 and Wi-Fi 6 devices. It’s an upgrade from the Orbi 850 series with a stepped-up internet connection, from 1 Gigabit to 10 Gigabit, and new antenna system with wider coverage areas.

The new Orbi RBK863 three-pack WiFi Mesh System provides up to 6750ft2 of coverage (750 more than the 850 Series) with up to 6Gbps WiFi speed and support for 100 devices operating at the same time. This coverage can be expanded with additional Orbi RBS860 satellites. To achieve this performance and wider range, NETGEAR uses patented dedicated backhaul Wi-Fi technology and antenna design. The exclusive tri-band mesh system with NETGEAR’s pioneering innovation ensures speeds stay fast as more Wi-Fi devices connect to the home network with less dropped connections.

“When we launched our flagship Orbi product line in 2016, we set a new benchmark for connected home products with faster speeds, higher capacity and wider coverage areas with our patented tri-band mesh design,” says David Henry, President and General Manager of Connected Home Products and Services at NETGEAR. “Our new Orbi 860 Series is designed to continue to deliver on the promise of superior WiFi. It provides the capacity to capitalise on higher incoming Internet speed, up to 10 Gigabit, an increasing number of devices and even better WiFi range than the Orbi 850 Series.  On top of that, we couple it with one of the industry’s best internet security protection services to help customers to secure all their home WiFi connected devices, including laptops, phones, tablets, speakers, cameras, baby monitors, TVs, light bulbs, light switches and more.”

For added peace of mind, the Orbi 860 Series includes a year of NETGEAR Armor to protect the connected home from online threats. Unlike traditional endpoint antivirus products, NETGEAR’s Armor is built into the router as a security solution to monitor activity going to and from the Internet, protecting computers, security cameras, baby monitors and other IoT devices, flagging external threats while eliminating the need for multiple security subscriptions or software. Additionally, it provides on-the-go protection and VPN for phones and laptops. Armor acts as a strong and effective ‘front and back door lock’ to any home network.

NETGEAR will also offer a standalone Orbi router (RBR860S) for those who live in smaller homes or apartments and desire the best WiFi performance as well as the flexibility to easily expand to Orbi mesh as their needs change. The iconic white Orbi RBR860S router is available now on NETGEAR.com.

The Orbi 860 Series Mesh System and satellites will be available in white as well as black, making them elegant and unobtrusive complements to any home décor. The system is available now on NETGEAR.com exclusively.