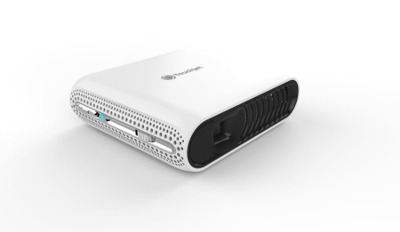 Tiny Android Projector Turns Any Flat Surface Into 80in Touchscreen

Funded entirely by a successful Indiegogo campaign – at the time of writing raising £571,015.40, to be exact – Touchjet’s Touchjet Pond Projector is a pocket-sized projector that allows users to interact with their photos, videos, games, Apps and presentations on a touch display up to 80in, anywhere they go, using two styluses.

Available now for £287.37 (US$450), the Touchjet projector will soon be available to pre-order in the UK and Europe.

Built on the Android 4.4 operating system, the projector gives users access to the Google Play Store’s vast library of Apps and games.

Users can also directly project from almost any smartphone or tablet using a third-party App. The unique design and infrared (IR) technology brings any Android App to life with an interactive screen that users control with a stylus.

“TouchPico is magic,” comments Touchjet. “Well, not really. It is pretty high-tech. Our infrared detection technology tracks the stylus and allows you to control and interact with the image that is projected on any surface at 40 frames per second.”

The stylus has a tiny infrared emitter. Its signal is captured by the TouchPico’s tiny built-in infrared camera and processed by an image processor to convert it into touch screen coordinates.

TouchPico is slightly heavier than a Samsung S4 phone and just about the same size, easily fitting inside a pocket or a suitcase.

Not stopping there, using a special accessory, users can even turn any table into an interactive surface.

This works by mounting the TouchPico and adjusting it so that the image projects down onto a table.

Alternatively, a user can buy a Glass Drafting Table and Glass Projection Film to build their own rear-projection interactive table.

The interactive surface is then controlled via the stylus, in the same manner that the wall projection works.

What can you do as a developer?

TouchPico supports native Android Apps, but since the screen goes beyond the limits of traditionally sized mobile screens, developers can tap into this potential.

• Develop board games that involve the whole family with several people playing on the wall or Android smartphones.
• Develop educational games, allowing teachers and students to interact with each other via the projected screen on smartphone.
• Build new Apps to share, discuss ideas or projects on Interactive Table.
• “Any App idea that could flourish with a larger screen will benefit from the features of TouchPico,” says a company spokesperson.

To make TouchPico available to everyone as soon as possible, Touchjet is giving special offers to early distributors.

Pledge for the TouchPico Distributors Program and the applicant will receive an evaluation sample and will secure exclusive lead-time of nine months for their country (excluding USA, China and Singapore).