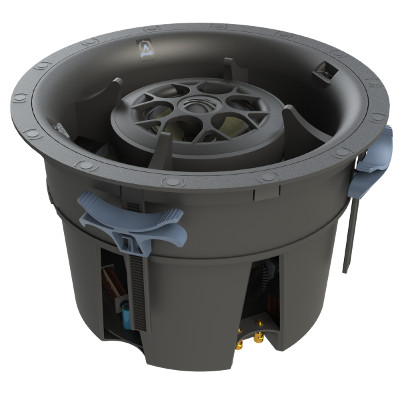 Origin Of A New Species At ISE

One of the busiest AV stands at the event had to be the Origin Acoustics stand as visitors wanted to get a look at what had bought CI speaker pioneer, Jeremy Burkhardt, back into the business.

With over 50 models already in the range at launch, there was a lot to take in and the company was keen to draw attention to what it sees as some real break-throughs in speaker design.

The designers of the range were set the task of creating audiophile grade high-performance in-wall / in-ceiling products in a smaller footprint design, that surpass every competitor on the market today – Origin argues they have done just that.

Origin says that patent-pending technologies and vertically integrated components were created that are so impactful on product performance and aesthetics that they are set to create a heightened standard for the industry.

The company is also promising to provide installers with first class support, technical and logistical, as well as $500 worth of free demo kit to get the ball rolling.

Part of the new line comes in the form of the Director Collection.

Designed from the ground up by respected speaker engineer and SpeakerCraft founder, Ken Humphreys, the Director Collection has been conceived to address the two greatest challenges for an in-ceiling speaker.

Origin says the first of these is limitations in bass response and the second being limited dispersion.

By using a fixed woofer combined with a unique, new mounting system, Origin says the team were able to dramatically reduce the overall footprint of the speaker.

The final outcome is the ability to produce substantially more bass from a smaller space, says the maker.

The dispersion issue was divided into two factors, the first being to widen it overall.

Origin says this was accomplished through newly patented driver designs and driver location within the baffle.

The second was to offer an ability to focus the sound at a particular point in the room.

Jeremy tells CE Pro that this particular concept came to him whist scuba diving when it occurred to him that fitting speakers should be as easy as zipping/clipping into his scuba gear.

Once the mounting hole is cut, a mounting ring is inserted and clips that ride on a rail similar to a zip tie.

The speaker assembly is then inserted into the mounting ring and locked into place with a clockwise twist with no tools needed for this part of the install.

Completing the system is an ultra-fine perforated grille with virtually no bezel that is magnetically attached to the baffle.

The grille material is also designed to reduce shadowing to reduce visual impact.

Jeremy says: “We had two years of hardcore thinking to reinvent the in ceiling category, from performance to installation ease, we accomplished a breakthrough. Origin products are disruptive and unique with smaller size footprints on the ceiling, high performance sound quality throughout the room and a better visual aesthetic. Our patents will cover most every aspect of these architectural loudspeakers and I hope to share these advancements with other companies to help lift the entire industry.”

This installation method requires no tools, as the dogs are spring loaded and snap into place with a twist of a thumbnail.

The precise amount of needed torque is placed on the drywall avoiding any warping of the baffle or damage to the wall itself while securing the speaker and maintaining the seal between the exterior and interior air spaces, says Origin.

A new surround technology is employed on all the woofers in the collection.

The X-Wave butyl rubber surround is actively involved in absorbing 700-1,400Hz resonances that run up and down the woofer cone causing distortion.

The surround is also part of a progressive suspension system that becomes more rigid as the driver approaches its furthest excursion point.

Origin says this results in greater control of the cone and less distortion at maximum volume levels.

Also included is the Dual Plane Stabilized Diaphragm or DPSD tweeter which is suspended at both the outside edge as well as at the peak of the dome.

This is designed to improve linearity and power handling along with lower frequency extension allowing the tweeter to crossover much lower to the woofer section resulting in an improvement in dispersion.

“We set out to make a difference in the sound quality people can expect from an in-wall speaker,” says Ken Humphreys, the company’s head engineer and CTO. “As we focused on each small detail of the speaker we heard the sum of these advances truly deliver a substantial improvement in sonic performance.”

The final part of the equation is the Producer Collection of in-ceiling loudspeakers.

Designed to address projects where costs need to be kept under control.

Featuring polypropylene and injection molded graphite woofers coupled with either a silk or aluminum tweeter and crossed over through multi-component networks, Origin says the speakers make none of the compromises expected at this price level.

“We understand that many of our dealers must meet a price point,” remarks Dave Donald, Origin’s V.P. of marketing. “We set out to provide these dealers with a level of performance that is beyond their expectations at an incredible value. I am proud to say that is exactly what we have accomplished.”

Find out about the ThinFit range from Origin Acoustics here