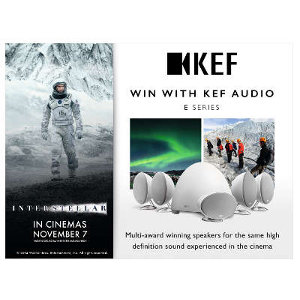 KEF has joined forces with Warner Bros to promote the cinema release of Interstellar, the new film by acclaimed director, Christopher Nolan.

The E Series take centre stage in supporting the campaign: ‘high resolution sound that is out of this world’ – tying in with the film’s theme.

Consumers visiting stores will be able to experience this AV speaker package and experience the acoustic benefits of the E Series compact speaker system.

In addition, KEF will be running a competition which anyone can enter online.

Consumers can simply click this link for a chance to win a four-night break to Iceland, where two people will be able to take in the Northern Lights and visit the movie’s filming locations.

Other competition entrants could still win an E Series speaker system as a second prize and 30 runners up will each receive an Interstellar themed merchandise goodie bag.

“It’s what we love. To partner with Warner Bros on one of 2014’s biggest movies by such a visionary director as Nolan and offer consumers the chance to win something that will really improve their experience of music and movies was really something we didn’t want to miss – the synergy is just perfect!”

“We’re are very pleased to be working with KEF and the agency, Lime, with whom we have created a really innovative and impactful partnership campaign which integrates perfectly with the rest of the Interstellar marketing activity,” concurs Vanessa Andreis, director of UK promotions, Warner Bros UK.