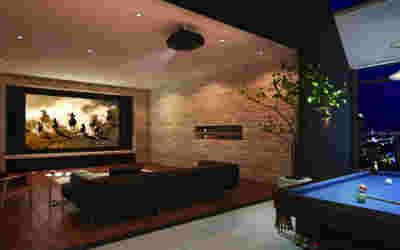 Home automation company, EasyComp contacted distributor AWE to take care of suggesting a top-of-the-range and reliable kit list for this luxury project, choosing URC to control, monitor and manage all aspects of AV and automation.

The brief from the developer, ‘Luxlo’ was for EasyComp to design, specify and implement all aspects of AV, lighting, HVAC and control systems into the home.

From the initial planning stages in January of 2014, EasyComp implemented everything from the cabling and wiring to the finishing touches of the joinery in July 2014.

A key requirement from the homeowner was for the system to be simple and easy to control.

This brief led to two control systems being fused together: a Lutron QS Homeworks system was installed and is responsible for the lighting, automated shades and curtains and HVAC control. For simple, user-friendly control, shortcuts were created directly from the Lutron system to URC Total Control, provided by AWE.

Three URC TRC-1080 controls are placed around the apartment: in the main bedroom, family room and media room.

These controls can be used in any room of the apartment and for ease of use, it defaults to the room the remote lives in.

Meanwhile in the main bedroom, the touch of a button on the TRC-1080 will alert the Total Control system to turn the television on and turn the screen to the optimum viewing position via an automated wall bracket.

EasyComp has also utilised the two-way Lutron Homeworks QS module from URC’s library, allowing the user to access all functions on the Lutron Processor.

EasyComp has illustrated the flexibility of the URC system in this project, as with one button press: ‘TV on’, on the Lutron Homeworks Keypad system sends a 12V trigger from the Homeworks Processor to the URC system.

This triggers a macro that commands the TV to power on, selects local input, switches the matrix input source to that display, powers up the Sky box and turns onto a particular channel. In addition, an ‘all on’ button on the keypad at the door can trigger the lights to turn on, the blinds to open and the TV to be on a certain channel by the time the user reaches the family room sofa.

“We have used URC for many years now on countless projects,” says Durgesh Sinh, managing director at EasyComp. “Not only is it easy to install, but it is a system we can confidently give to our clients knowing that using the interface will not be intimidating and it will instead offer a straight forward solution to controlling the home comfortably. It does everything you need it to do – and simply! Physically, the buttons and visual feedback of the TRC-1080 make URC our top choice in control systems.”

A total of 15 KEF Ci200QR, four KEF Ci200QL and several other KEF speakers are placed throughout the property, either in the ceiling or hidden from view behind the joinery.

Within both the media room and the family room the KEF T2 subwoofers are small in size and hidden out of sight in the joinery.

EasyComp requested two doors for the rack, meaning that if the installer needs to access the back of the rack they can access it through the cloakroom door.

The client also requested a simple to use control system that can control all aspects of technology in the house. As such, everything in the property can be controlled via the URC remote controls and URC App on an iPad.

The end user is said to be particularly impressed with what URC can do, in addition to the customer service EasyComp can offer thanks to the remote access feature.

By installing an IP control power strip, EasyComp can login remotely and power cycle any device in the rack.