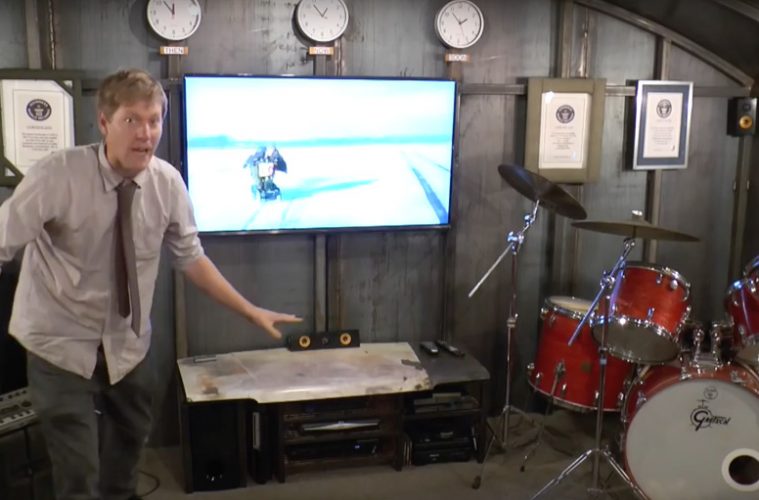 Sky 1 created a new programme called You, Me And The Apocalypse, focusing on the ways different people would react to the news that the world is ending in 34 days.

“So I thought to myself, ‘what would I do?’ Well I’m not just going to sit here and take it; I’ll dig myself in, make myself a massive hole and make myself a little nuclear bunker so whatever comes at me, whether that be natural disaster, social unrest – I’ll be safe down here in my little safety cell,” says Colin.

Funded by Sky, Colin proceeded to dig a huge hole in his garden, then placing a metal box with all the electrics, adding ventilation pipes, later covering it in waterproof concrete with a hatch leading into the bunker from his garden shed. Should mains power fail, there is a backup generator on hand.

“As we are not currently in an apocalypse situation, this is basically the ultimate man cave,” he says. “That’s why we have a massive flat screen TV, surround sound which is built into the metal works so there are no cables dangling anywhere. We’ve got all sorts of games consoles, going back to the 90s, to the present day, a Sky box – and because you can make all the noise you want down here and no one can hear you – we’ve got a drum kit!”

In future videos Colin will look at creating an air filtration system and different ways of generating power other than using a petrol generator.

“People seem to think that I’m some sort of mechanic/engineer person but in reality I’m just a plumber,” says Colin.

“The things I make are made with tools that proper engineers would laugh at but I’m proof you don’t need an expensive lathe and huge welder to create something amazing. What you do need though is a place to do stuff and the right people to ask when help is needed and also someone to tell you that you will fail, as that drives you on a bit more!

Colin left school at 16 and went straight into plumbing, after that working full time doing Gadget Geeks for Sky. “Then when YouTube came about it gave me a way of getting an audience and my videos soon became popular which all helped in getting me on telly.”

Watch the finished result in the video below, and the project in stages in the slideshow.