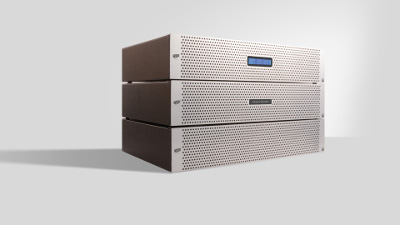 A Piece Of Cake From HDanywhere at ISE

HDanywhere is previewing LayerCake, a three-part whole-home AV distribution system, comprised of a 8×8 video matrix, a 12×12 audio matrix and an eight-zone power amplifier.

HDanywhere says that with LayerCake, installers can quickly and easily deliver up to eight zones of colourful, immersive multiroom HD video and up to 12 zones of high fidelity audio to a client’s home.

The development of LayerCake means that for the first time ever CIs can get audio, video and amplification all from the CEDIA award-winning HDanywhere brand.

Once available, LayerCake will be sold in a variety of configurable packages that CIs can choose from.

Other LayerCake packages will use the existing HDanywhere mHub, mHub 4K and Modular HDMI matrices for the video distribution ‘layer’.

Chris Pinder, MD at HDanywhere explains: “Although we are new to the field of audio, the manufacturing plant that we recently acquired in Worcestershire has been designing and building audio products since the early 1900s. We are grateful to be able to draw on century-old expertise during the designing of LayerCake and know that the system will be better because of it.”

Chris adds: “Whole home audio distribution and video distribution go hand in hand. Projects often utilise two systems from different brands running in parallel. We want to offer installers a total video, audio and amplification solution under the HDanywhere brand that is simple to spec and even simpler to install.

“With LayerCake, you can effectively eliminate the time spent searching for an audio matrix and amplifier and you don’t need to worry about whether these products will play nice together. We’re creating a total audiovisual distribution system that makes life substantially easier for CIs.”