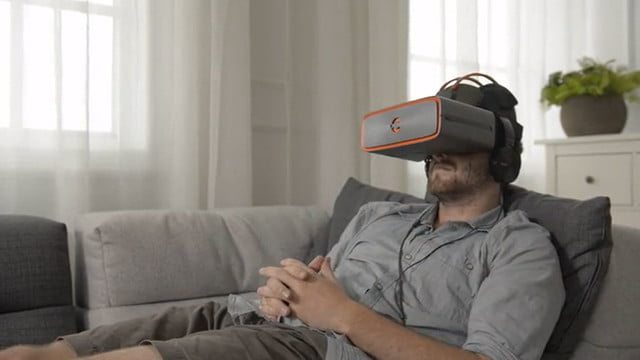 No doubt virtual reality is one of the big tech topics of recent times, however until now the emphasis has been more in the commercial sector for cinema and on gaming for the home.

Signs that things might be changing include a dedicated home cinema headset product on Kickstarter not just reaching its funding target, but smashing it.

Cinera styles itself as the world’s first personal home cinema, offering an ‘IMAX-like’ experience. Offered at an angle of 66°, the headset uses dual 2.5k screen displays one for each eye. It’s designed to work with a similar interface to a smart-hone, so should be easy to use.

The unit also allows the user to load apps like Netflix, YouTube, or Hulu and there are ports for a microSD card, a USB cable, an HDMI cable and a micro USB. The headset can be connected to a Blu-ray player, a computer, or a gaming console. The set can also deliver 3D with no glasses needed.

Another neat trick the unit has is a matching articulated arm/stand, which means you don’t have to ‘wear’ the device, as it can be presented up to the eyes at the right level and angle, so the user can sit, lie-down and stay comfy whilst using the system.

So what can we say, its definitely an improvement on some of the options out there and looks like it will offer a decent options for those who want to go solo. Its unlikely to be the last of these devices and it seems credible that a headset will become part of many households AV options, can it ‘replace’ a proper cinema? Hell no, of course not, but immersive experiences will become more popular, something for installers to start thinking about.