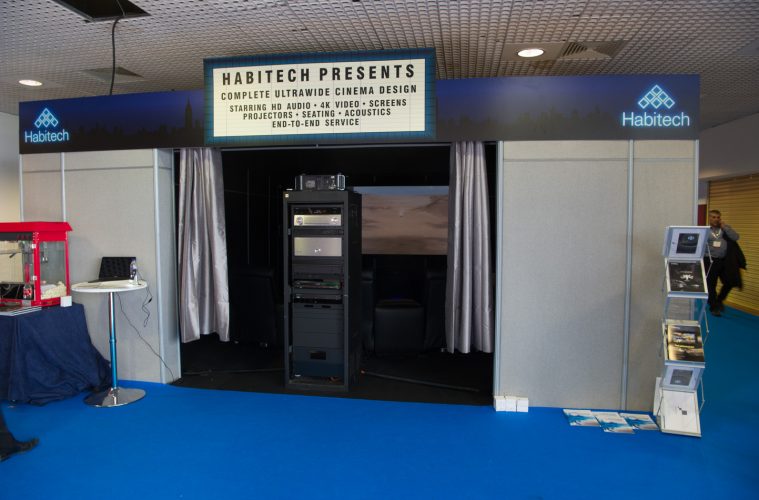 Essential Install Live! South is the ultimate trade show for those in the residential install industry and it has wound down on yet another year – with visitors enjoying a record number of exhibitors and a huge range of products they could use in their next install.

Home cinema systems were a common sight on the showfloor this year, with a variety of companies such as Habitech, Karma AV, Draper Screens, Genesis Technologies and AWE all flexing their home cinema muscles for the installers who filled the aisles.

Habitech was keen to underline its credentials with a full demo aping the concept from its own Design Centre theatre experience at the company’s HQ.

Jonathan Pengilley, company MD, said: “Lots of people are talking about 4K, but we are actually doing it!

“Our new Design Centre gave the opportunity to pull together products that can really deliver the new technology, that once you experience, you never want to go back from.”

The company was particularly keen to underline how important achieving the super wide screen format that around 85% of movies are created in by using the Panamorph lenses partnered with a JVC X9000 projector.

Jonathan was also at pains to point to the new line of Firenzi theatre seating which offers an alternative to the higher-end Salamander range the company also offers.

The new seats come with a three-year warranty, are all leather and are fully electric. For extra comfort, the foot rest and head rest can be altered separately.

Jonathan added: “The real strength here is in all the brands we have pulled together here, Yamaha amplification, Sonance speakers, JVC’s X9000, a Panamorph Paladin 2.4:1 lens on a 4m ultra-wide Projecta screen, all combine to deliver the best available in home cinema right now.”

More news from the other brands in the Habitech cinema included a new roadshow being undertaken by Projecta to explain and underline its pedigree in the manufacturing of screen material.

Projecta is one of only three companies in the world that makes materials specifically for projection screens. During its roadshow the company will be travelling around the country to explain how it provides protection to pixels in the 4K era and how to get the best from its products. If your company wants a visit from Projecta, get in touch with the brand via Habitech.

There were more home cinema revelations over on the Karma AV stand as the company launched its own range of fixed screen cinema screens. Calling the concept ‘Ultimate Screens’, the main messages for this line-up are ease of install, 4K-ready, acoustic transparency and free delivery.

The screens come in 16:9 and 2.35:1 options and offer simplified installation by removing the need to attach the frame and tension it faced down on the ground (risking damage to the velvet frame and screen material). Instead, installation is completed in simple stages as the main screen assembly is hung on the wall, then the black fabric backing is added into the screen frames fabric retaining channel, followed by the 4K acoustically transparent screen fabric itself. Finally, the magnetic velvet screen borders are added.

From October the company will add masking screens to the line-up and Karma promises good margin across the range.

The AWE Village became the hub of a lot of home cinema technology, boasting a Dolby Atmos cinema room where it was showcasing the abilities of the Epson EH-LS1000 4K laser projector powered by Denon electronics and KEF R-Series speakers. The whole room was also showcasing smart control using an URC system.

The demo room also had a few other additions. This included a Marantz SR 7070 4K Ultra HD AV receiver, as well as a Draper Clarion 133in fixed frame projector screen.

Over at the Epson sound booth, Draper was showing off its screens, focusing on its TecVision concept.

Joseph Burke, UK sales manager, Draper Screens, explained: “We are focusing on the projection materials themselves, we want to focus on the part that you actually look at, not just about the way they are deployed.

“We have two different types of TecVision materials here today to give you an idea of what they could look like in different light levels. We’ve got a grey surface and a white surface – the grey surface is better at projecting the ambient light in the room, meaning projection can be used in more lighting environments.

“We’re here in connection with Epson – and that makes sense. Between the two companies we’re able to cover the benefits of projection along with the right kinds of screens.

“A lot of the dealers that are coming here are gaining that confidence, now thinking they can use screens in different kinds of environments. It’s very easy to install a TV – they seem to be coming back to projection as they are seeing the benefits of using a great screen and what that can do. We’ve been able to talk to them about return on investment too; they’ll always make more money with projection installs vs. a flat panel TV because there’s more installation and more consultancy involved.”

Chris Sullivan, account manager, Epson added; “We’ve got the EH-LS10000 laser projector and the new pre-production, EH-TW7300 HDR compatible 4K home cinema projector, which will be released to dealers in September. The new products are garnering a lot of attention.” 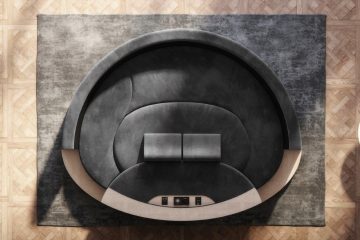