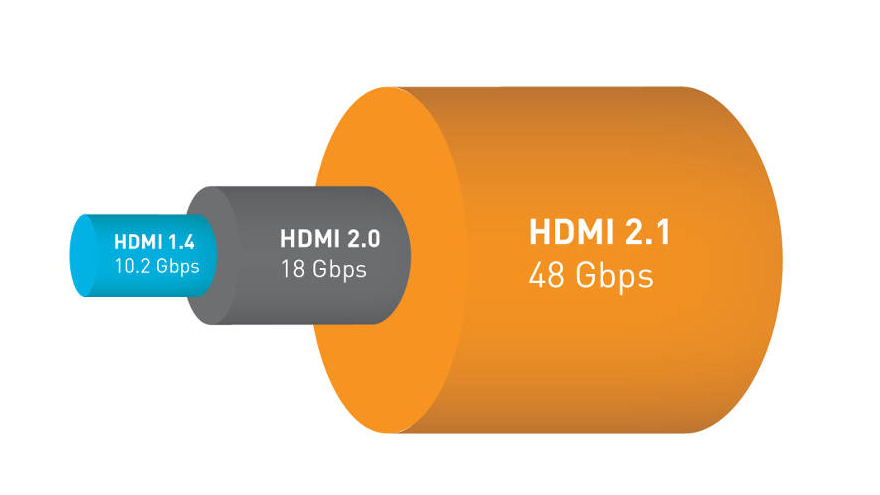 HDMI 2.1 is on its way and it will bring a whole host of new features for users to enjoy. This includes the ability to carry resolutions up to 10K with frame rates up to 120fps. The downside? New cables and new TVs will be required to gain access to the new HDMI specification.

All TVs currently on the market will be non-compliant with the new HDMI 2.1 specification, meaning installers wanting to deliver the latest technology or future-proof their clients will need to purchase a new set. The unfortunate thing about that is that not a single TV carrying the new specification has been announced from any of the major manufacturers, and it might not be until at least later this year – if not next year – that new TVs carrying the HDMI 2.1 spec start to become available.

The roll-out of HDMI 2.0 happened relatively quickly following the official specification’s release, although it may not be the same situation for HDMI 2.1. Panasonic was the first to announce an HDMI 2.0-compatible TV, with the WT600 being unveiled simultaneously to the new standard. There were no HDMI 2.1 specifications at CES 2017 however.

Despite the need for a new TV to get the most from the new HDMI 2.1 specification, even sets that launch later this year won’t take full advantage of the new standard. HDMI 2.1 has been created to ensure TV manufacturers don’t have to slow down in order to keep up with the cabling infrastructure; now manufacturers have plenty of room to innovate in terms of picture quality and resolution, without worrying about no one being able to enjoy it.

Unlike HDMI 2.0, the new HDMI 2.1 specification requires all new cables. That means those expensive HDMI cables touted as being ‘future proof’ are already out of date.

The new HDMI 2.1 cables will be capable of processing a lot more bandwidth than the current cables. Up until now the maximum TMDS has been capped at 18Gbps, but the new cables will be greatly enhanced with support for up to 48Gbps.

Despite the bump in bandwidth, the HDMI Forum has ensured that the current connector design, one that consumers have become familiar with, has remained the same. The new cables will also be backwards compatible – meaning they’ll work even if the TV doesn’t support the HDMI 2.1 spec.

New cables will look largely the same as old cables, although there is one thing to watch out for – a huge mark-up on HDMI 2.1-compatibility.

As with most first-generation products, expect first-generation HDMI 2.1 cables to be extremely overpriced. It’s likely that one won’t be needed for quite some time, even for those watching a lot of 4K content in HDR, so it’s probably best to stick with the affordable and plentiful HDMI 2.0 cables. When the need comes however, try weighing up the cost and benefits to work out whether an HDMI 2.1 cable is right for your install.

So consumers will need completely new TVs and new cables to go along with that, but what do they get out of this upgrade? Well, this is one of the biggest upgrades to the HDMI specification in quite a number of years and there are a lot of new features.

The reason for the new specification is because users are demanding higher resolution, content with higher frame rates and deeper colours. All of that additional information is vying for bandwidth – and the current infrastructure is limited. The new specification should be able to handle a wide range of different content types with varying resolutions and frame rates.

According to the HDMI Forum, the new HDMI 2.1 specification will support resolutions up to 10K – including existing 4K content and upcoming 8K footage – with frame rates up to 120fps. Current cables are limited to a 4K resolution up to 60fps.

While bandwidth will be the key component of this new specification, there are a few other additions that could trickle down to existing TVs. This includes dynamic HDR, which uses metadata to tell the TV how to handle a specific piece of HDR content. LG announced sets that support this feature at CES 2017, but Dolby Vision already offered this functionality.

Dynamic HDR differs from standard HDR 10 in that it tells the TV how the picture should be displayed on a frame-by-frame basis, rather than the current method which is to optimise the TV at the beginning of the content.

In addition to dynamic HDR, the HDMI Forum also revealed the latest version of ARC (Audio Return Channel). Dubbed ‘eARC’, this new functionality should enable easier connection between AV devices. That means a sound system can be directly connected to the TV through an HDMI cable without any other cables being involved. Previously there were limitations to doing this – but now thanks to eARC even object-based surround sound formats are supported, meaning Dolby Atmos over ARC.

The final big feature to come with the HDMI 2.1 specification is ‘Game Mode VRR’. This will be an interesting feature for gamers, although PC gamers will already be familiar with the technology if they use Nvidia’s G-Sync or AMD’s FreeSync tech. That’s because the technology is designed to allow for variable refresh rate, ‘which enables a 3D graphics processor to display the image at the moment it is rendered for more fluid and better detailed gameplay, and for reducing or eliminating lag, stutter and frame tearing.’

Many of these features will work with existing HDMI cables – as long as both devices you’re connecting from support the HDMI 2.1 standard. The only stumbling block is for those wanting to take advantage of the extra bandwidth, such as those pushing through greater-than-4K60 footage.

HDMI 2.1 is still some way off. While the specification was unveiled at CES 2017, it has yet to be finalised. The HDMI Forum says that it should have a final specification available for manufacturers in April – June 2017, meaning it’s likely too late for most 2017 devices to get any HDMI 2.1 action.