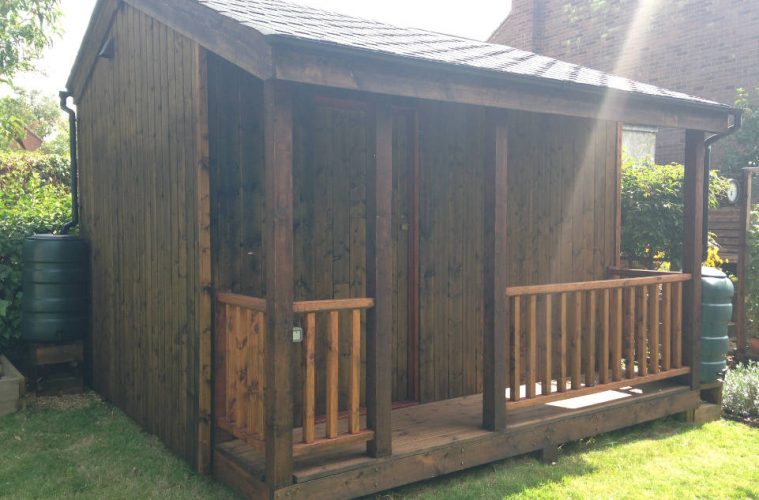 You may have already heard of Ashley Yeates, albeit for another install entirely.

Going viral last year was his charming Hobbit Hole install, which garnered such intense media attention he set up the company, Torii Gardens.

Originally envisioning the hobbit-sized home to house a fully functioning cinema room, it turned out that there was only enough space to wedge in a 5.1 speaker system. No cinema for Bilbo and co, then.

Not to worry, as Ash soon had a new idea; creating a cinema and gaming room space in a shed in his back garden.

“The Hobbit Hole story went a little crazy on the internet last year,” he tells CE Pro Eu. “This was a great boost for us. I’d still love to build a second one, but with multiple rooms inside. I like to create full garden spaces rather than individual items however – I know the difference having a nice space to relax in can make, so I enjoy offering these up!”

During the interview, it transpires that Ash’s background is quite varied, including typical builds such as large vegetable cages and decking platforms, to high-quality bespoke garden furniture, to the more unusual, Hobbit Hole-type builds.

Amazingly, Ash has never worked as an AV installer; he has run various businesses from home. “These tick over nicely and allow me to spend time on projects like this,” he explains. “Needless to say I’m a huge fan of all things tech though!”

Interestingly, this was nearly a cinema room treehouse instead of a shed. “The knowledge and skill is there, but the right garden space wasn’t,” he shrugs.

Inspired by Peter Nelson from TV series, Treehouse Masters, Ash spent a large amount of time researching his own build – even down to testing his tree-mounting methods and CAD designing various models.

“I was going to create a single room sanctuary for playing board games in, but in the absence of having a garden in which the treehouse wouldn’t overlook neighbours, I decided to bring it back down to ground level and save that idea for a later date,” he explains.

“This idea evolved into a home-cinema setup and ultimately I decided to go with a very authentic feel and a relaxing space.”

And what a set up it is.

Inside is a BenQ W1070 HD 3D projector, Tannoy speakers with 5.1 Dolby surround sound and under floor subs, a Yamaha RX-V377 AV home theatre receiver, a Samsung BD-H5900 3D Blu-ray and DVD player, an Xbox One, Xbox360 and a PlayStation 2, not forgetting the outdoor lighting, star-light ceiling and, naturally, a popcorn maker.

So why a shed?

“I guess it’s quite straightforward to buy a projector, put a screen up and play games or watch movies in front of it, but not everyone has the space to dedicate a room for a permanent install – or the authority!” Ash points out.

“I think a key aspect of the build is that the outbuilding is very unassuming.”

He’s not wrong: to all intents and purposes it looks like a normal shed or summerhouse.

“With touches such as the water reclamation and outdoor sockets, it’s also functional in a garden environment – the only difference being the second you walk in and close the door behind you, you are transported to an entirely new place.

“Plus, I think that having a permanent set-up is a real draw. Something which you don’t have to put up and take down after every use is great and it ultimately means you get more enjoyment and use from it.”

It’s hard to convey what it feels like once inside, but being in such a private, enclosed space, the sound and visuals hit you as though you are in a full-sized cinema.

“It’s an incredibly immersive experience, especially for video gaming,” he nods. “I think that having a completely separate space really helps to take you away for a moment. If it was just another room of the house, I don’t think the effect would be quite as powerful. Additionally, because everything is soundproofed, you can have the volume turned right up but it’s silent once you’re a few meters away from the building – it’s great to be able to enjoy it fully without impacting on anyone else.”

Ash is confident that The Torii Cinema Company’s cinemas will add real value to homes when it comes to selling systems – that’s if people will want to part with their AV sheds at all – which is why Ash is also offering a service to maintain all of its cinemas for those who want it, whether that be a paint touch-up or preservative or an equipment upgrade.

“I’ve drawn this mentality from Peter (Nelson) who happily hops on a plane to deal with any issues his builds might get – I think it’s the perfect attitude to have and shows potential customers that you take great pride in your work.”

Designing and building the system

Ash started by designing and installing the main outbuilding, using CAD software to predict any issues with space and predict potential problems that might arise.

“In terms of the hardware inside, I went with the BenQ W1070 projector which I think offers superb quality and features for the price point with its 3D capabilities and full high definition. The BenQ also allows for a very decent screen size (94”) for its throw range, so it really sold itself to me. I’ve decided to stay away from 4K for now, but there’s certainly a future upgrade on the cards,” he hints.

“I think that having a completely separate space really helps to take you away for a moment. If it was just another room of the house, I don’t think the effect would be quite as powerful”

For the sound system, Ash opted for a modest budget option, “but using stand-out products which win awards for low-price but surprising quality,” he adds. “The Tannoy TFX 5.1 speaker package was a good choice as the speakers not only look great, but really pack a punch for passives. They’re driven by the Yamaha RX-V377 AV receiver, which I’m very impressed with.

“The level of settings and calibration available allows for a great level of adjustment and in the moderately small space I’m filling, provides a very rich, immersive sound. The sub is under the raised platform as well, so this creates a superb under-seat rumble which flows through you when you turn it up – it certainly adds to the overall feel.”

For the screen, Ash created a custom mount and stretched some PSM Screens MaxiWhite projector canvas over it, “which works very nicely,” he says.

Meanwhile, the lighting uses two separate dimmer circuits: one for the LED spots which Ash uses for main lighting, while the other circuit is used for the ambient dimmable bulbs on the wooden pillars, used for creating the right ambience when films are being played.

“These were going to be remote controlled, but I haven’t found a system which I like well enough yet,” he notes.

Hardware includes a Samsung BD-H5900 Blu-ray player chosen for its 3D support, screen mirroring tech and easy USB access. Ash is also running an Xbox One, Xbox360 and (he assures CE Pro Eu, for nostalgia and testing purposes only) a PlayStation 2.

External HDMI port access has also been included, allowing him to easily plug a laptop in to work from, as well as USB ported plugs in the back row for charging phones from. “It’s the small touches which make something that bit better,” he grins.

The AV space also contains its own silent fan extractor system, which lifts hot air from the top of the stack and pulls it from the cinema through snaked soundproof air tunnels to minimise sound transfer.

“The AV receiver is at the top with plenty of breathing room, as I’m sure most of your readers know how much heat they can put out, which you don’t want radiating into your other equipment.”

Understandably, although a tech-lover, Ash is not a seasoned AV installer, running into a few challenges during the install.

“Getting the screen perfectly aligned was something I wanted to get perfect so was quite tricky – until I realised the BenQ (and probably all other projectors) has a ‘test’ button which displays a grid,” he admits. “That was a ‘doh!’ moment for me.”

Unusually, Ash managed to source authentic seats from the York Royal Theatre in Leeds instead of purchasing brand new ones. “I was always looking to get new seats, but when the option came up for these I couldn’t resist putting a little bit of history into the build – and although they needed a good clean, it’s nice to know that those seats have seen some amazing talent in their life-time.” Ce Pro Eu notes down that he means the productions, not the theatre patrons.

So what is Ash’s favourite part of the cinema shed? “I absolutely love the star-ceiling; it was a lot of effort installing it but the results are very satisfying, especially as there are actually about 14 constellations from the Northern hemisphere accurately installed,” he enthuses.

“I love to sit back, put on some Brian Eno, dim the main lights and enjoy the ambience it creates. I could have said the personal pick-and-mix counter, but I was strong!” he laughs.

The Torii Cinema Company has only just launched, so it’s too early to judge the demand for Ash’s bespoke cinema sheds – packages for which are available in bronze, silver and gold (priced at approximately £16,000, £23,000 and £32,000, respectively).

“We’ve certainly had lots of enquiries coming in already which is great,” he says. “We’re really looking forward to getting our teeth into some more builds for people as the finished product is such an enjoyable experience; we want people to look back and consider it the best investment they’ve ever made.”

As CE Pro Eu concludes the interview, what’s abundantly clear (aside from a refreshing honesty) is Ash’s passion for unusual projects that challenge him. “I love building these projects, but the cinema came out so much better than I expected,” he admits. “Everyone who has seen it falls in love immediately and wants one, so I built a website to make them available!”

Kevin Pietersen Is Bowled Over By His New Home Cinema!