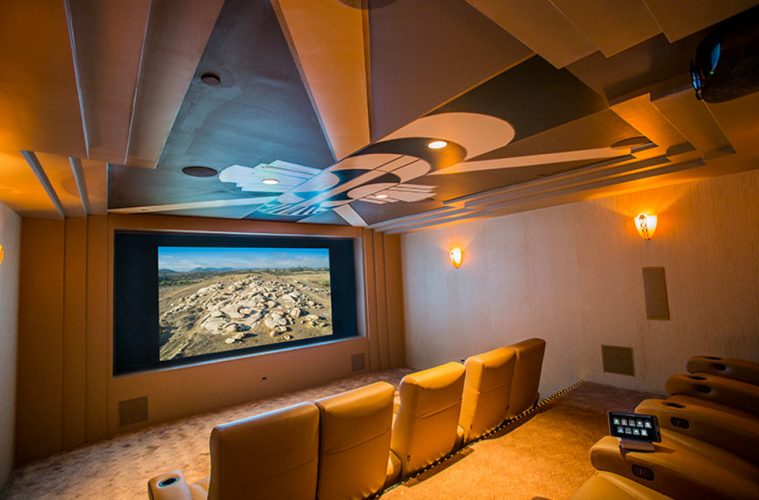 “The client happens to be my next door neighbour,” Larry Page of Page Digital tells CE Pro Eu. “He had received a bid for a home theatre in his basement from a larger local AV company and had no idea what I did for a living. He was concerned about the picture quality and they couldn’t really offer a demo projector for him to see before committing to the project, which they quoted as $250k (£173,210).

“He was talking with another neighbour and expressed he’d rather have a big plasma screen because he loved the picture he got from his family room plasma. That neighbour said he thought I knew a lot about TVs and that he should talk with me.”

Larry went next door and looked at the proposal with his neighbour and saw that they had quoted $30k (£20,763) for a 1080p projector, “which was ridiculous,” he says.

“I explained if he’s spending that much money he should be getting a 4K projector and that they were just trying to clear out old inventory. They had quoted over $100k (£69,000) in speakers and I asked if he was an ‘audiophile’ because that’s way too much money in speakers if he’s not. He’s in his late 60s and as I guessed, that wasn’t a priority to him. I then asked why they only had $15k (£10,379) in seating as that’s a very important part of a theatre – if your seats aren’t comfortable you’re not going to enjoy the experience.”

After getting advice from Larry, the client immediately asked his assistant to cancel the contract. “He told me he didn’t care if I was more expensive; he felt I explained things to him in a way that made sense. He wanted the best and if that meant spending $300k instead of $250k, that was fine with him.”

“In addition to the powerful audio produced by Sunfire, this home theatre is fully equipped with ELAN-controlled lighting, projection and seating,” Larry adds. “It defines comfort and convenience, while simultaneously delivering high resolution visuals and crisp, 360-degree audio.

“Brian and I designed a system that would truly encase the viewer in what they were hearing,” he continues. “In addition to seven Sunfire in-wall speakers and Sunfire HRS1 subwoofers, I incorporated four SpeakerCraft AIM 285 Atmos in-ceiling speakers to propel sound downwards. The configuration successfully envelops the audience in immersive audio, emulating the audio experience of being in a movie theatre.”

Larry then installed an automated Stewart Filmscreen Microperf screen with acoustically transparent masking panels paired with a 4K Sony projector, designing the system so that the projector electronically adjusts the frame of the projected content – normally projected in a 2.35:1 presentation – to match that of the screen.

“In order to customise film content to adjust to the screen without the typical ‘black bars’ you’d see above and below the content, I installed a mechanism that electronically adjusts so the projection fills the screen,” he explains.

To deliver the comfort required, Larry installed 11 electric recliner seats, configured in two rows, which can be re-positioned at the touch of a button on the homeowner’s Apple iPad that is integrated with an ELAN controller.

The home theatre’s Lutron lighting, audio, seating and projection system are all integrated with the home’s central ELAN gSC10 SystemController.

With several ELAN touch panels on the walls and multiple Apple iPads equipped with the ELAN g! Mobile App, the homeowner can control the theatre from anywhere.

The homeowner was so impressed with Sunfire’s audio quality that he had Larry outfit his all-new game room and family room with Sunfire CRW2 in-wall speakers, Sunfire CRWS3 Speakers and a Sunfire HRS10 Subwoofer.

The client is already enjoying his new system, having recently hosted a birthday party for one of his children in the home theatre. “This is the perfect space for parties or a simple night in for the family. It’s exactly what I wanted it to be,” he enthuses. “There’s fun for the entire family, all thanks to the integrated technology that makes the experience possible. The difference in the audio before and after the renovation is spectacular. The combination of high quality speakers and carefully construed design configuration truly make it sound like we’re in a movie theatre.”

Additional video and control integration in the following rooms: