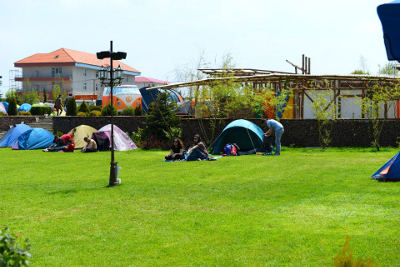 The installation comprises of various areas of audio and also the need to supply a lounge area with a capacity of around 100 seats with an outdoor cinema.

Marius Craiu, sales and marketing manager for AudioVision, explains that the company first launched in 2002 and was originally a rental specialist and remains a major player in the rental market in the S-E region of Romania.

The company also has its own store providing professional sound and lighting solutions and has managed to not only survive a challenging financial period, but to grow as well.

Having its own technical and service departments and with the support of partners like AUDAC, the install team is able to provide rapid solutions to complex projects or to any issues that can occur.

Marius says: “After receiving several references about AudioVision, the owner of Sandalandala decided to contact us to find the optimal sound system solution according to the specifications of each area of the camping.

“The venue has different areas with different audio needs. The system for the terrace, which is 120 m², is designed to cover the entire area for ambient sound, but also to be suitable for parties.”

To get the performance needed, the install team used an AUDAC CMP30, Digital Audio Source with tuner, CD and MP3.

The team also used an AUDAC Pre-Amplifier with six in and two stereo balanced outputs because the volume for the terrace can be different than the one for the camping area and can be from a different source.

Marius explains: “The camping sound system is made for ambient music and also for the sound of the old classic movies which are played on a wall visible from any part of the camping during the summer nights. The screen is 7m in diagonal and is made with a NEC PA550W projector.

“The camping area is divided in two zones. One is close to the terrace and the projection screen and the other is further from the screen. There’s a difference in height between these areas, so for each zone, we have assigned different channels of the amplifiers thus being able to pass the signal through a delay and give the deserved coverage and quality in sound to the cinema.”

Next for the site, the team will be installing a dedicated sound system for the out-door movie theatre.

In terms of major challenges, Marius explains: “The challenge of the project was to have a good coverage of the entire area and a good quality of the sound which didn’t exceed the recommended budget.

“In order to accomplish this, we had to find a way to distribute the speakers all over the camping area without damaging the design and the image of the area. The owner agreed to the idea of modifying the lighting poles and to place the speakers above the lights. After that, we advised him about the position of the poles and what height they should have.”

Marius adds: “In the past year, we have had many installations with similar requests: systems that can provide ambient and also party music with best results. We provided a lot of solutions and sound systems for beach bars, pubs and lounges, but also for public institutions and schools.

“My favorite area from the Sandalandala project is the back of the campsite, as you sit on the thick green grass and hear the waves and listening to good music played properly. The owner is delighted about whole project. He considers that the solution offered by us satisfies not only his needs, but also his desires.