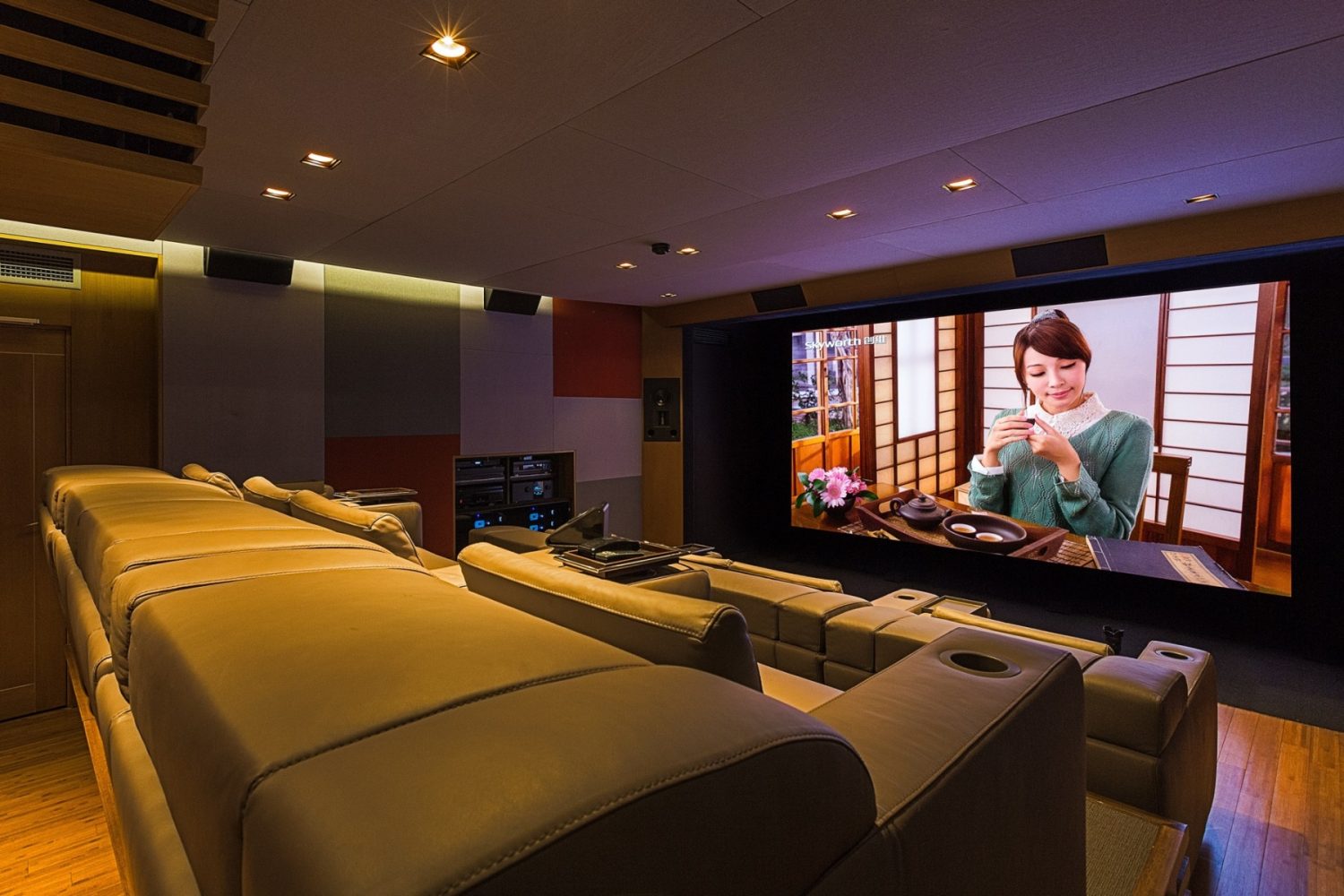 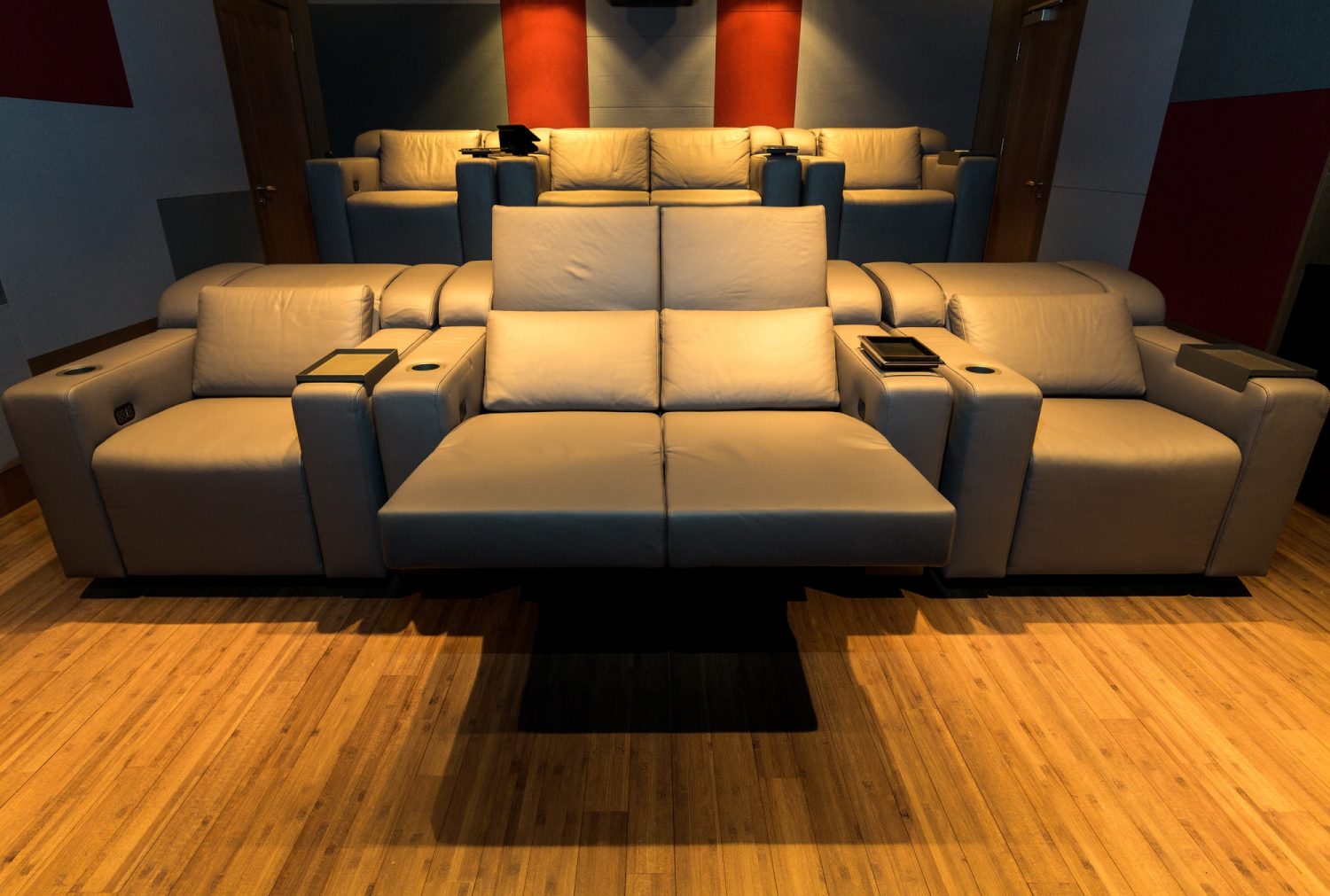 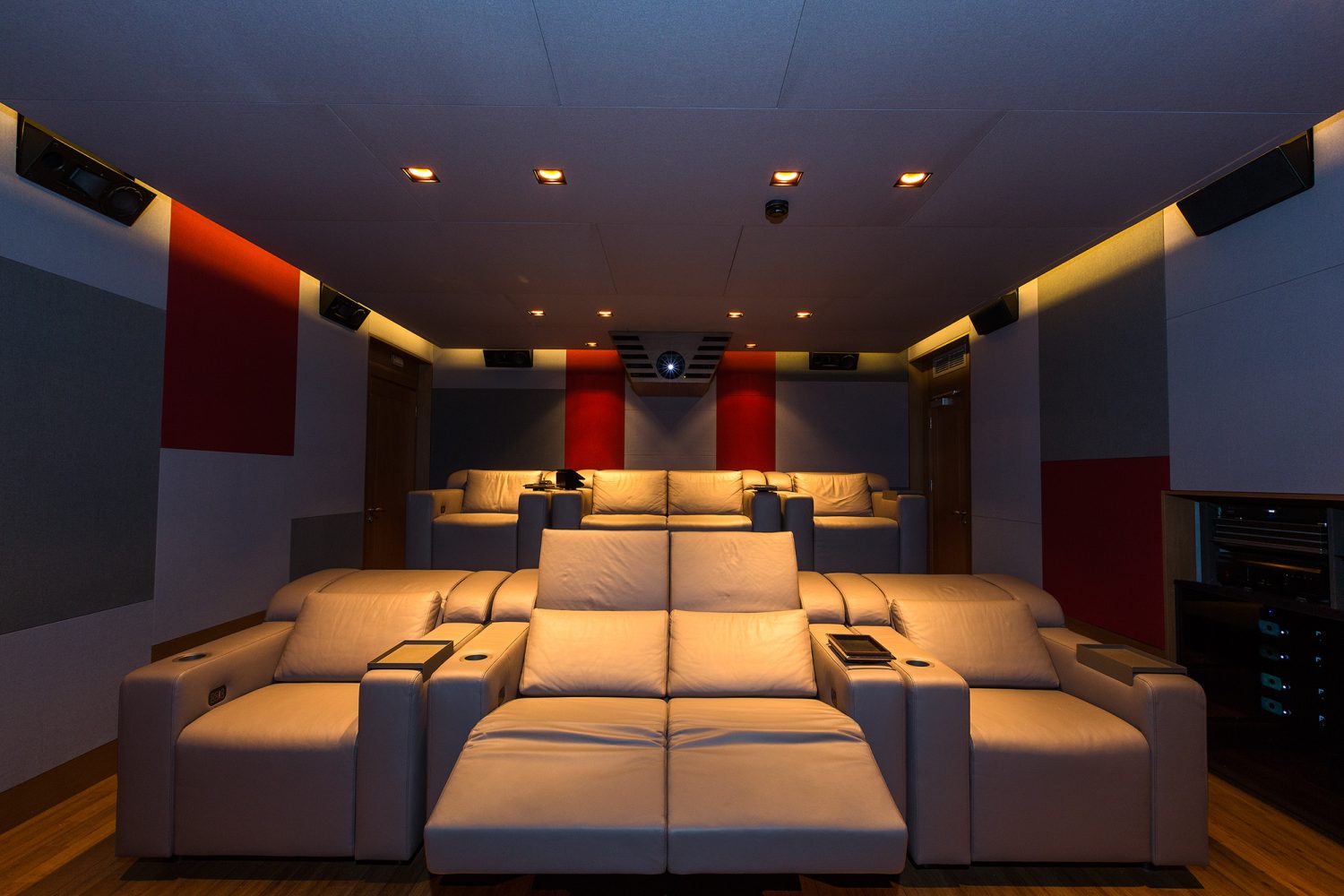 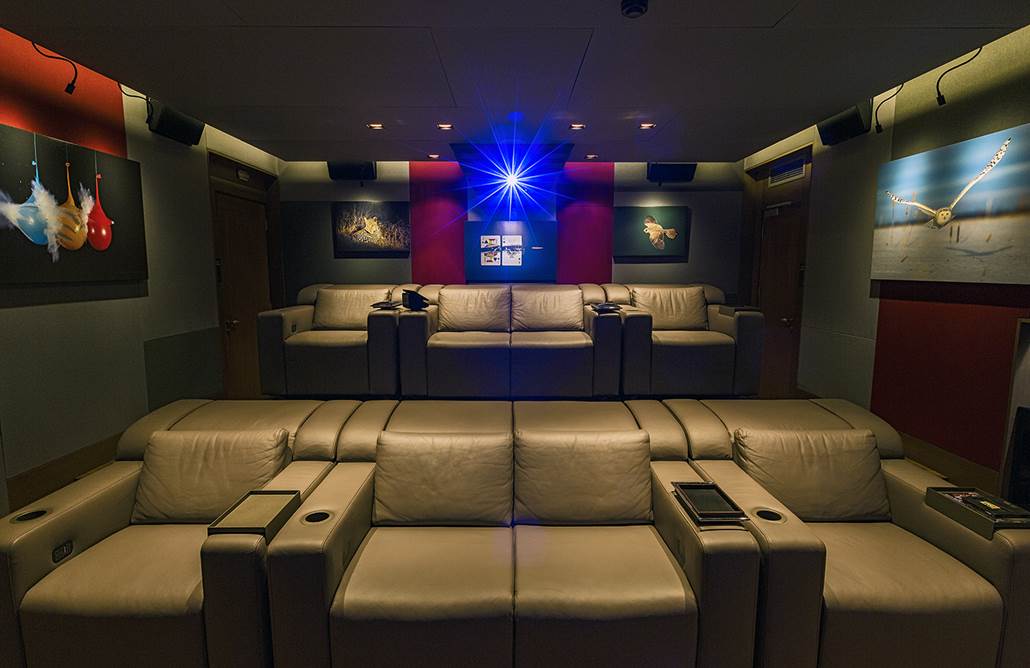 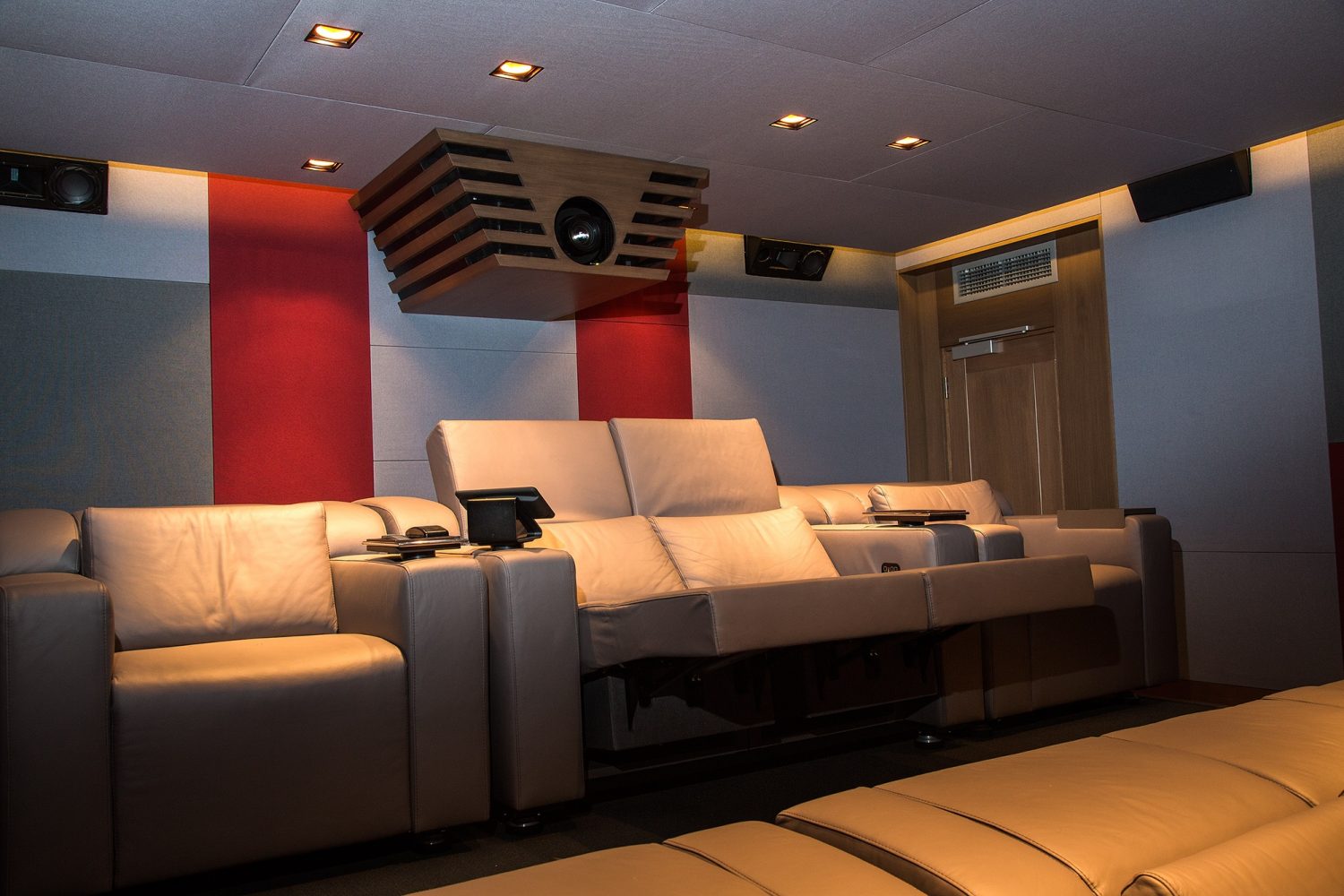 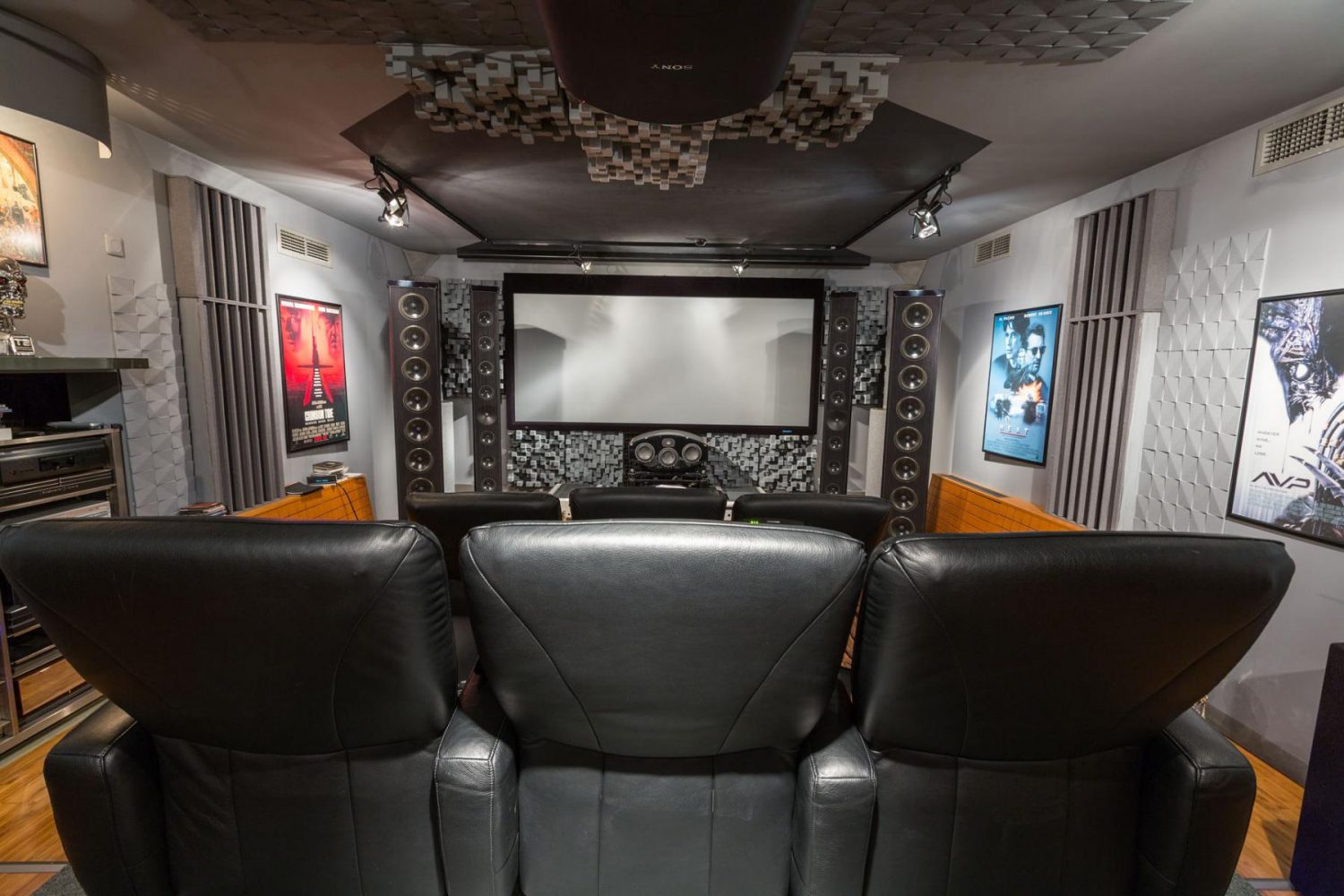 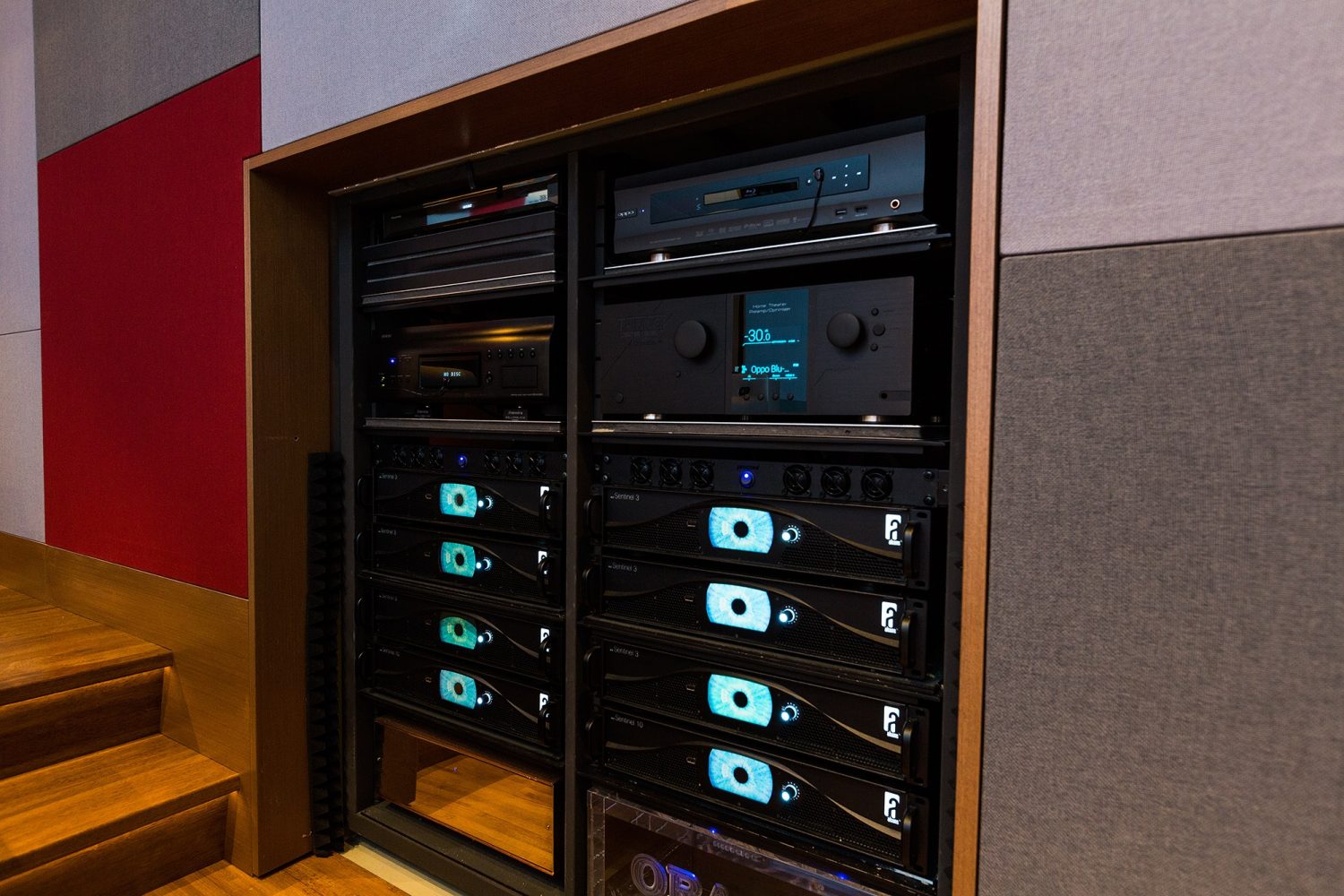 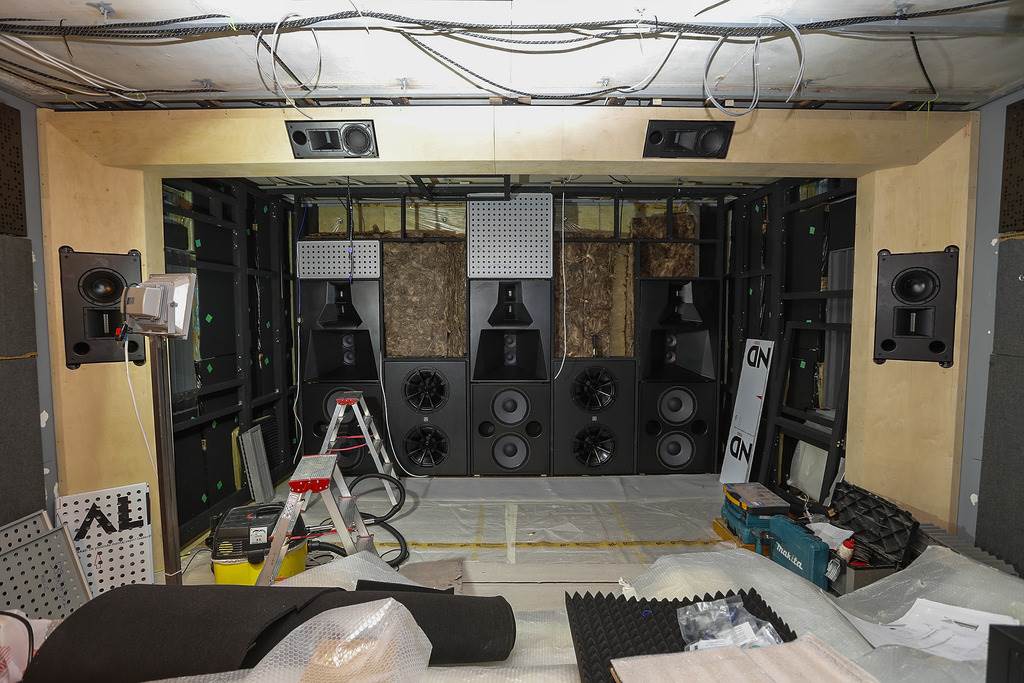 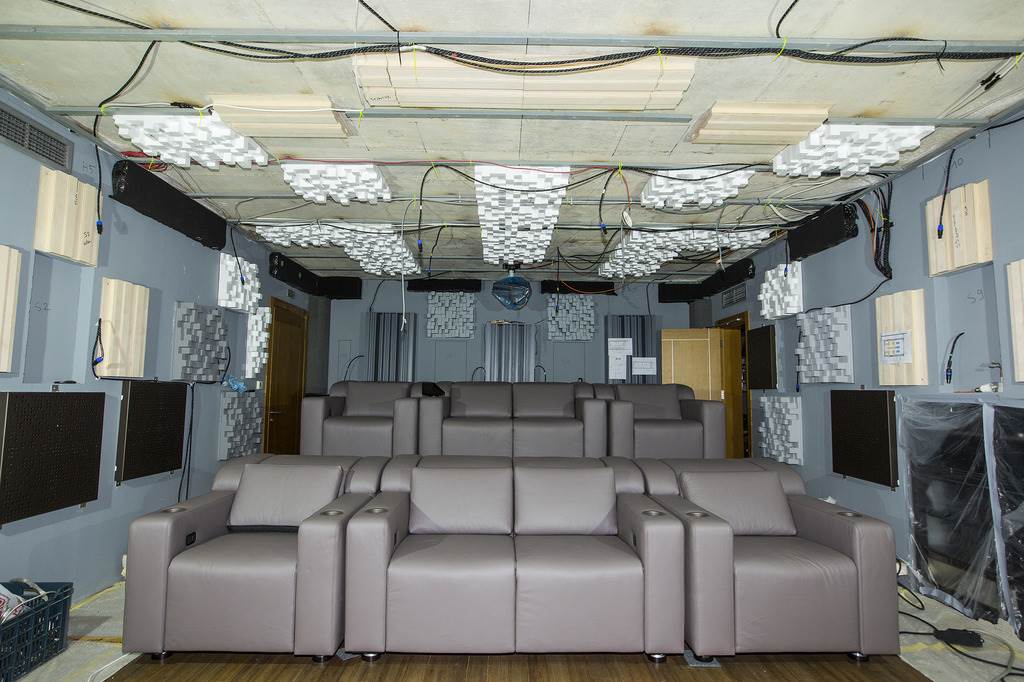 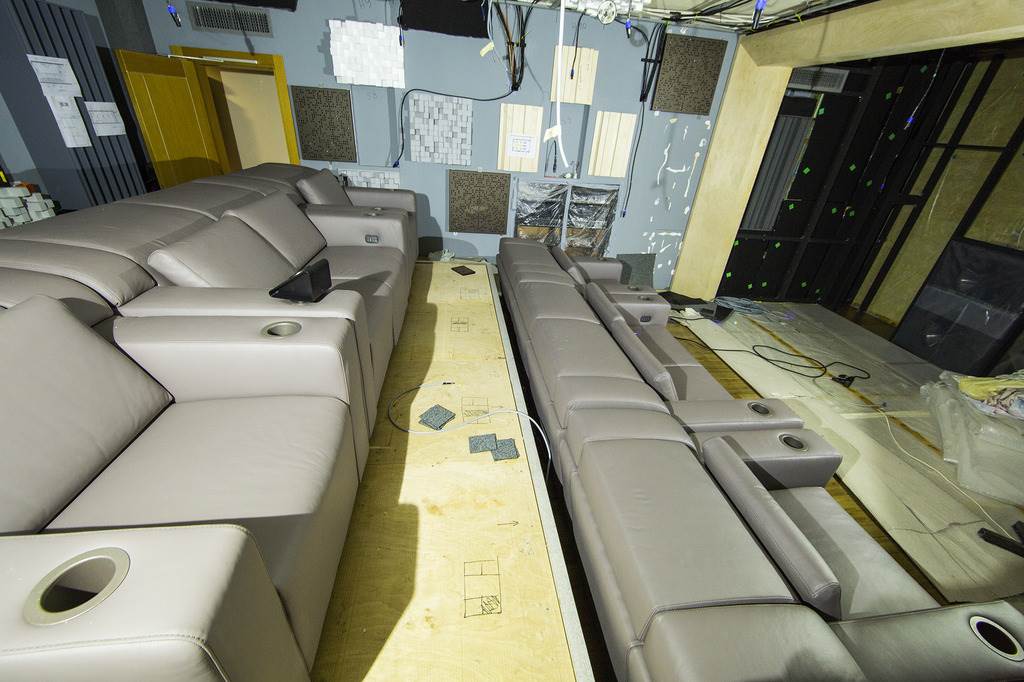 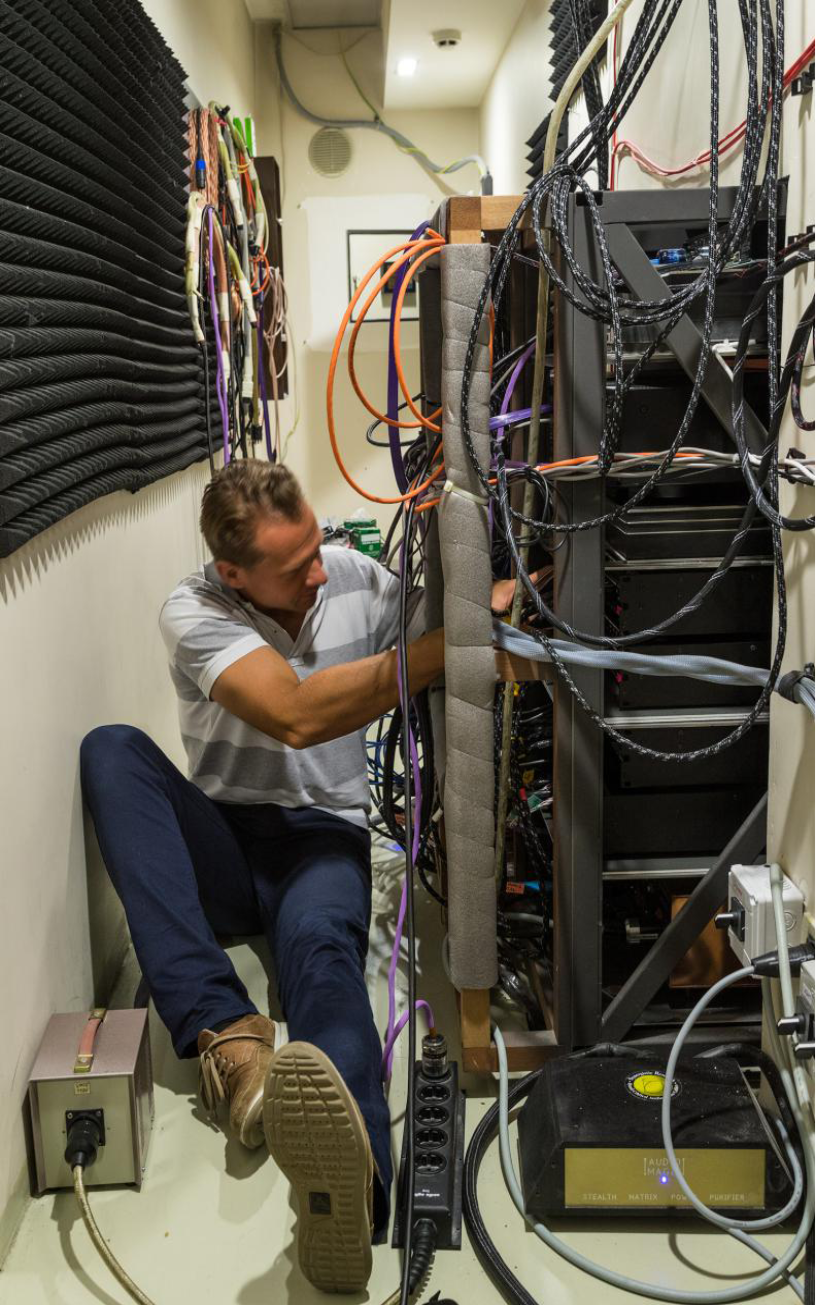 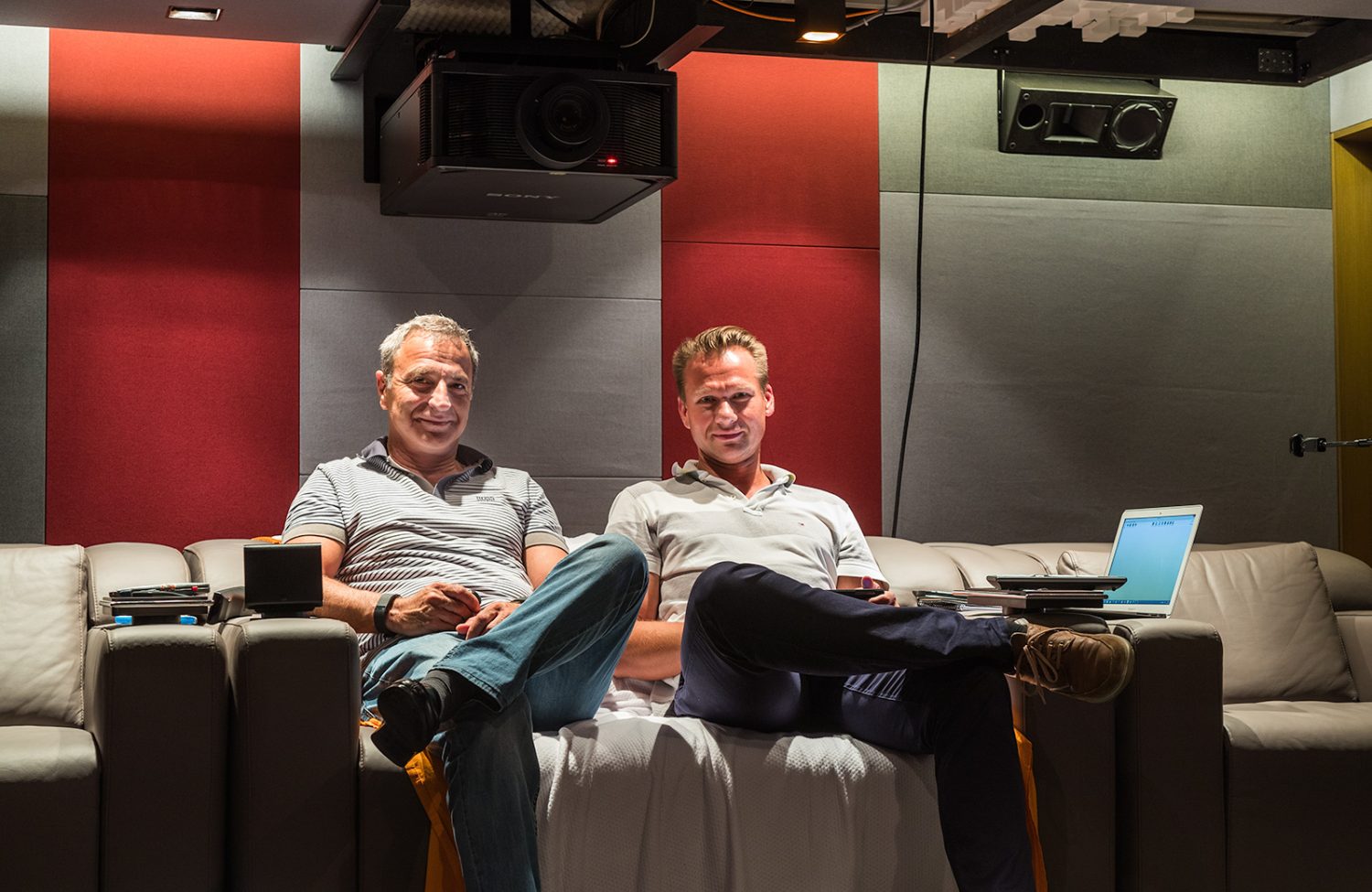 Murat has been passionate about quality sound since school, purchasing his first high end system 20 years ago, then building his first home theatre in 2001.

“About 10 years ago I moved to my current house and started to build a better system, but for the past few years I stopped upgrading it, as it was already top of the line and my interest in listening to two-channel audio had faded,” Murat reflects.

This year, however, Murat decided to replace his 7.1 system, at the same time removing the huge, two-channel loudspeakers.

“Having a large two-channel system in the room was an obstacle to upgrading to current sound formats and it also meant I could only have a small screen for watching movies. So I decided to get rid of everything and start again from the beginning, installing a high end cinema system with the latest technologies,” he says.

Murat spoke to Florida-based Peter Montoulieu, proprietor of high-end home cinema design/installation company Cineramax and self-styled ‘top cinema guru’. Peter’s cinemas are named after moons of Saturn and he specifies that each new one has to surpass the performance of those commissioned before. Having recently spent USD$6m on a four-cinema R&D immersion deployment, Cineramax knew that the Alcons C-series audio system would be an ideal solution for Murat.

“The key aspect with the new immersive sound formats is to create a coherent, smooth 3D soundfield around the listener, without any gaps and apparent transitions,” says Walter Fortmüller of Walter Fortmüller SAVO, who provided his acoustical design and system tuning specialist skills to Cineramax for the project.

“The outstanding dispersion characteristics of the C-series, together with close to perfect timbre matching between different speakers, allowed us to deliver this audio quality in every seat. Seat-to-seat variation is minimised with balanced and closely matched on-axis and off-axis response – the whole listening area becomes the ‘money seat’. Even with 27 speaker channels, object-based sound formats place and move sound events between those fixed speaker locations. It is critical to have very stable, focused phantom images. Alcons products perform exceptionally well in that regard.”

“The key aspect with the new immersive sound formats is to create a coherent, smooth 3D sound field all around the audience – without gaps and apparent transitions,” Walter tells CE Pro Europe.

“In addition to the 27 speaker channels we have a total of eight subwoofers, with 8×12” and 2×18” (plus dual 18” passive radiators) drivers. These are placed, arrayed and time/phase aligned in such a way to provide the smoothest integration with least seat-to-seat variation over the entire listening area – even prior to any response shaping done with digital room correction.”

A Trinnov Altitude32 processor connects to the Sentinel ALCs through 16 channels of digital AES and 16 channels of balanced analogue XLR connections, also acting as video switch for all connected sources. The user interface is a WiFi VNC client running on an iPad, which is also integrated with a Crestron system for central control of all aspects of the installation, including lighting, air conditioning and sequenced power on/off for all components.

One main design focus was to do all three major immersive audio formats full justice, in providing a close to format agnostic speaker layout within the rather limited space provided by this basement room.

“This system is using the Altitude to its maximum potential and the Sentinels, with their flexible interfaces and additional DSP functionality, work with it really well. We have programmed several presets with different configurations and, while the main preset performs very well with all kinds of content, the client has the option of applying changes like bass management on/off, different upmixing algorithms versus native channel mapping and slight changes in timbre/target curve (to adapt to, for example, different recording methods or mixing styles).

“This is a one-of-a-kind setup and speaker layout that is pushing the boundaries of Immersive audio at home and I couldn’t think of any other brand of speakers that I would have rather used,” he enthuses. “We are delighted with the results and this will be the benchmark to beat for everything we will design from now onwards.”

“In a very complex system like this one it is of paramount importance to get the basics right,” Walter adds. “Room acoustics play a key role in that. I took a rather unusual approach by specifying only fully customised acoustic treatment elements for the acoustical design – with a strong focus on diffusion. I didn’t use any off-the-shelf products; every element has been purpose-built (most by the client himself, who runs a large metal factory). The result is a very well balanced, spacious sound field. Prudent application of digital signal processing for final tuning was just the icing on the cake!”

To put it mildly, Murat is one happy customer: “When I first heard it, outwardly I was keeping my cool, but I was thinking, ‘Oh my God, I’ve never heard such sound from any home or commercial cinema system! Using Alcons has made a huge difference. I can hear new sounds in movies that I’ve never heard before and the intensity of the all sounds is so powerful. Things like explosions and laser blasts are scary at times, the subs really shake the seats, but they are always incredibly clear.

“Every element of the sound is powerful, yet extremely detailed. The Alcons loudspeakers never show any sign of distortion and handle extremely ‘heavy’ sounds as easily as if they were playing soft music. They deliver everything that is asked of them effortlessly. I’m so happy that I went with the C-series!”