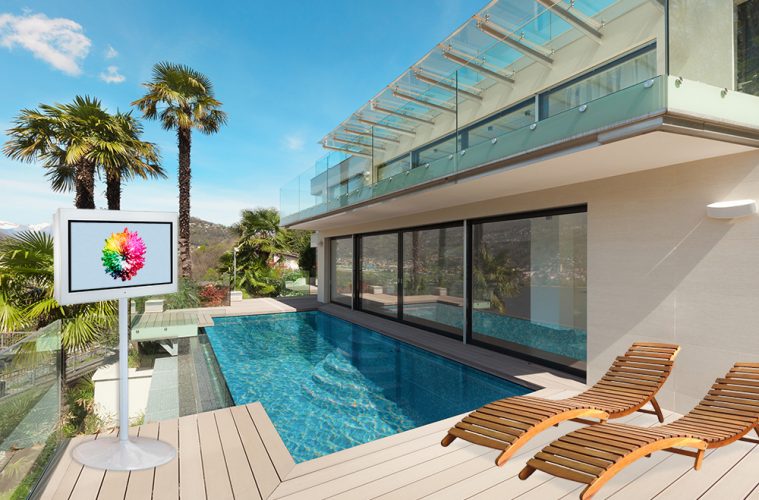 Exterior TV From Aquavision On The Horizon

The trend for exterior AV shows no sign of slowing down, as established player Aquavision wades in with a new family of exterior TVs called Horizon.

Doubts that the trend for exterior AV would ever really catch on in Northern Europe have been trampled as consumers show they are just as happy investing in the right systems as their counterparts in the sunnier parts of North America.

Investment in exterior spaces, including heating and lighting, to make them more palatable to be when the weather is less pleasant, has increased. Consumers wanting entertainment options around their pools and in dedicated exterior cooking areas are also factors in the growth of exterior AV, as has the fact that Europeans don’t let a little bad weather spoil their fun.

However, the products of course have to deal with some pretty tough conditions and Aquavision has risen to the challenge with its new Horizon line, a range of outdoor TVs which it says will withstand nearly all extreme weather conditions.

The waterproof televisions are based on the established Nexus+ and Elite 4K range and are available in four sizes, 32in, 42in, 55in, 65in and 85in. Aquavision says the anti-reflective LED screens provide extremely high-quality pictures and brightness, ensuring optimum viewing even in the brightest sunshine.

The new range has been launched just in time for summer and are suited to installation by the swimming pool, on the patio, or in the marine sector.

The sets are suitable for the marine market

These VESA mount televisions offer features such as IP control, DVB-T2/S2 receivers and two HDMI and USB inputs. RS232, IP and discrete IR control are standard and IP65 rating ensures the sets are fully protected against water, dust, sand, moisture and insects. The Horizon televisions are fully compatible with all leading control systems and will be able to handle temperatures of -40° and up to 110° C without any problems.

Alastair Benn, managing director at Aquavision, says: ‘We’ve been developing this outdoor range for a while and are really excited about the Horizon. It combines much of the technology from our top of the range in-wall sets with the added benefits of the ultra-high brightness levels of 350-2500cd/m2.”

The sets are made in the UK at the company’s own factory in the UK and carry a two-year in-home warranty as standard (in the UK).

The Horizon was most recently on show at EI Live! and the company was also delighted to pick up the award the Best Integrated TV/Display of the Year at the 2017 Smart Building Awards presented at the end of the first day of the show. The award was for the ConnectTV Active module which enables the television to control all signals (including HDMI) and power via a single Cat5 or greater cable using HDBaseT.