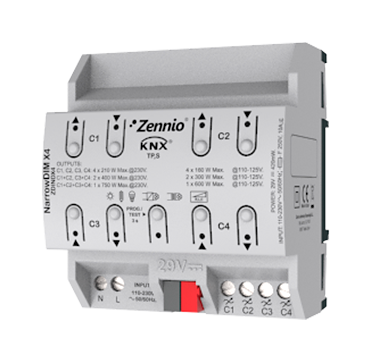 New from Zennio is the NarrowDIM X4, a four-channel universal dimmer. The manufacturer aimed to release this at Light & Building, but due to the pandemic Zennio says “the current situation has demanded our reinvention”.

According to the manufacturer, reinvention is exactly what NarrowDIM X4 stands for. With the DIMinBOX still being widely used all over the world, LED lighting was asking for a more subtle dimmer, which Zennio has answered with this new product.

A four-channel universal dimmer, compatible with LED, CFL and RLC loads and 210W per channel at 230V in 4.5 DIN rail units. The company has added what every dimmer should have: manual control, error detection, adjustable dimming curves for LED and CFL loads and auto load detection for RLC loads.

Additional features include 10 independent logical functions, heartbeat, 10 scenes/sequences per channel, customised On/Offs, timers, flashing and one wire per channel + L + N – totalling at six wires. The manufacturer adds that there is “virtually none” in terms of the minimum load.

Since the company foundation more than 15 years ago, Zennio has grown to become a very well-known company within the automation industry and particularly in the KNX world. Due to the increasing demand of high-quality automation solutions worldwide, international expansion became a requirement and, with more and more projects in the UK, Zennio’s UK-based subsidiary was established by the end of last year.

Vidar Thomassen was appointed as the director to run the new UK subsidiary. With over 25 years experience in KNX, he was actually one of the first distributors for Zennio products in the UK and has been working with Zennio as an independent consultant for the last seven years before officially joining the Zennio family.

Zennio´s second leg in the UK is Javier Aguirre. After four years as an integrator in Spain and after working within various departments in HQ, her is now Technical Manager for the recently created UK branch and provides support to projects taking place in the United Kingdom and Ireland.

Zennio aims to increase not only brand awareness but also general KNX awareness while providing local support to distributors, specifiers and integrators and acting as direct channels to the brand resources. Some of these resources include the web support service, which can be accessed from Zennio’s website, and currently provides support for all types of enquiries regarding all of Zennio products and solutions.