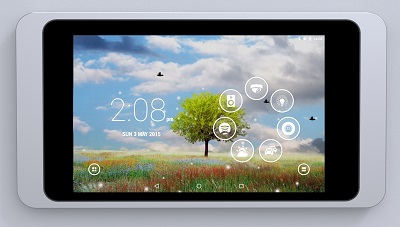 Habitech is now shipping the Flow7 control touchscreen to customers in the UK.

Flow7 has been designed as a ‘luxury’ solid aluminium 7” in-wall screen that runs from a single PoE network connection on a switch.

Unlike some other touchscreens available, Flow7 boasts a high resolution display.

The Flow7 runs Android 4.4.2 and boasts 1GB of RAM and 16GB of internal storage, whereas the FHD version has been updated to Android 5.1 Lollipop and has 2GB RAM and the same 16GB internal storage.

Flow7 is not exactly a stock version of the Android OS, with the company having heavily skinned the UI.

Google Now is still present however, allowing users to ask their touchscreen a question such as: ‘how many chucks could a woodchuck chuck if a woodchuck could chuck wood?’, and then get an answer. It is just like Siri, only harnessing the power of Google’s search engine instead.

Thanks to the inclusion of Android, the touchscreen also boasts a plethora of Apps – including Sonos, NuVo, Hyperweather with Netatmo, Nest, Hive and many more that users will find on their Android-based smartphones.

Flow7 has been designed for both horizontal and vertical installation and can even be retrofitted to single UK or US wall boxes.

Commenting on the move Habitech technical manager Justin Martin-Lawrence says: “Rather than impose a proprietary control hierarchy, Flow7 allows you to choose and deploy the native Android control apps developed by the control system makers themselves.

“Flow7 enables a great touch screen when you want to use your control system for C4 or RTi, but where it wins versus, say, a C4 panel is that it doesn’t tie you in to C4.

“Use the C4 app in the C4 world and use RTi, Crestron, Enado, Demo Pad, AMX, URC, NuVo, Nest, Hive, Vantage Apps in theirs – as well as Sonos, Facebook, traffic reports on Google, Twitter, BBC weather. The list is endless.”