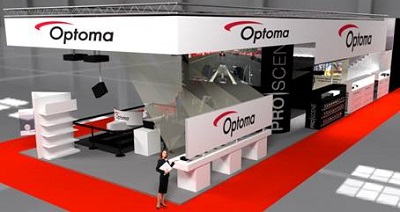 Optoma is hoping to steal the show at ISE 2016 by announcing the world’s first 4K HLD projector, which promises to offer industry leading colour accuracy and detail that will wow just about any projector novice or expert alike.

For those unaware, HLD stands for high lumen density. The technology promises to boost the brightness and colour performance of a standard LED projector by three times.

This isn’t Optoma’s first outing of an HLD projector however. In June 2015, the company partnered with Philips to offer the world’s first 1080p HLD projector, but at ISE 2016 it is cranking that up a notch by increasing the resolution to 4K.

Optoma’s head of visual system solutions and technical services, Justin Halls, says: “HLD technology will enable a new generation of far brighter LED DLP projectors with industry leading colour performance and accuracy. Optoma is proud to be leading the way and introducing it to the home cinema market in 2016.”

Both Philips and Texas Instruments have been involved in the creation of Optoma’s latest projector, which promises to astonish visitors to the company’s stand (1-M80).

Len Carlton, managing director of Optoma EMEA, notes: “Optoma is always striving to embrace new technology and engage in bespoke installations and projects. The ProScene solutions, designed for the Pro AV market and new 4K and HLD products are recognition of this. We are excited to unveil our latest developments in projection technology.”

The world’s first 4K HLD projector will not be the only thing Optoma is showing off at ISE 2016 either. In fact, the company is planning to split its stand into five distinct zones: 4K, HLD, corporate and education, ProScene solutions and home.

In the 4K zone visitors can expect to catch a glimpse of Optoma’s 4K UHD projector. This projector offers a single-chip DLP design which promises to avoid alignment issues; good news for those wanting to do away with ghosting.

The DLP 4K UHD solution delivers more than eight million pixels to the screen with four million mirrors.  Each mirror is capable of switching over 9,000 times per second, creating two distinct and unique pixels on the screen during every frame to deliver full 4K UHD resolution.

Optoma’s head of visual system solutions and technical services, Justin Halls, says: “We invited these companies to join us as they are market leaders in their fields. This means we can offer some of the most exciting and innovative projection solutions, which we’ll be showcasing on our stand at ISE 2016”.

One of the most exciting things Optoma will be showing off at ISE 2016 will be one of the most advanced full motion racing simulators, where visitors can put their driving skills and bravery to the test.

Those who dare can sit in BRD’s authentic carbon composite SimCell monocoque and feel the full G fore of the unique V1-500 range of motion.

Best of all, on each day of the show, the top three fastest drivers will win a prize.

Away from all that excitement, Optoma also plans to show off products that it is hoping could change an entire industry. One such technology will be a unique mirror head product using the company’s ProScene ZU650 laser-phosphor projector to create a projection mapped retail display.

Three high-tech mirror head units, each combined with a ZU650 projector, will demonstrate the dynamic solution with images and video moving across different surfaces before coming together to create one seamless panoramic projection display.

Projection Artworks will also be on Optoma’s stand, where it will demonstrate its daylight-visible window displays and interactive product showcases, which are powered by LED and laser DLP projectors from Optoma. These displays promises to bring the digital world to the physical world, by actually applying animated content onto or around products, to generate engagement and sales to the shop floor.

For those looking for something a little closer to home, Optoma’s home zone is the place to find it. The company will be showcasing its latest 1080p home projectors designed for lights-on entertainment.

There will be live demonstrations of Optoma’s GT5500 ultra-short throw projector and the HD28DSE projector with DARBEE Visual Presence technology.

The ultra-short throw lens allows users to show extra-large 100in images on any wall, with the GT5500 placed just 30cm away. While Optoma’s HD28DSE is being billed as the ‘ultimate projector for movie fans’. It boasts integrated DARBEE Visual Presence image enhancement technology which uses neuro-biologic algorithms to enhance detail and depth in skin tones, texture and reflective surfaces.

For corporate clients, installers will find a range of new technologies suitable for these types of integrations.

Based on laser-phosphor technology, the ZH300UW possesses a unique ultra-wide aspect ratio allowing an increased number of users to interact with the display and also accommodates two 4:3 images in a picture-by-picture format.

Featuring a solid-state laser-phosphor light engine instead of a traditional projector lamp, the ZH300UW produces a brightness of 3,000 lumens. The laser engine also eliminates the cost of replacement projector lamps, as it has a life expectancy of up to 20,000 hours.

Also being demonstrated in this zone is the 1080p ultra short throw interactive projector, the EH320UST. This uses a new generation of finger-touch interactive technology, enabling several people to work simultaneously on the screen without using a pen. Its mounting system and interactive setup will also likely be a feature many installers will be fans of; as it promises to be fast and simple with virtually no maintenance or calibration.

Experts from Optoma’s Product Management team and European Sales regions will be on hand to provide technical knowledge, one-to-one demonstrations and sales support.