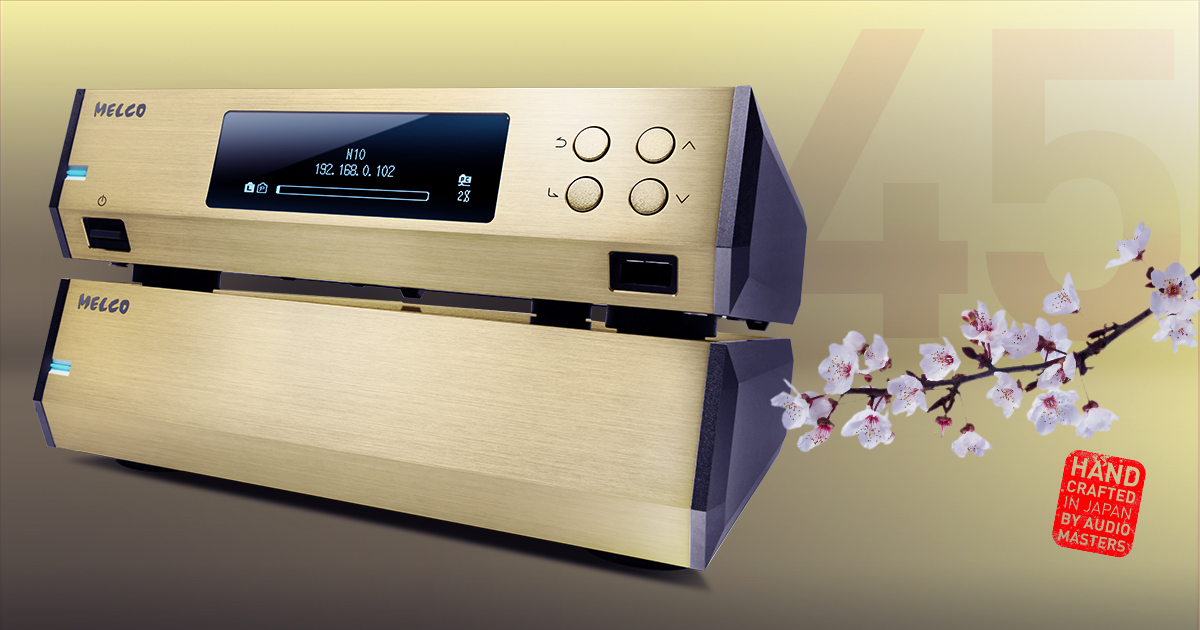 Finished in a celebratory ‘champagne gold,’ Melco will produce just 50 N10 45th Anniversary Limited Edition units, which will only be available in Europe. The special edition is supplied in an exclusive presentation box containing an official Melco certificate, pen, chopsticks, coaster, notepad and USB drive.

In line with the rest of Melco’s EX Series range, the N10 45th Anniversary Limited Edition will benefit from the recently introduced EX Series upgrades (including Roon compatibility via USB download).

The EX Series upgrades centre around the introduction of a powerful software suite, Melco Intelligent Music Library (MIML), plus vTuner Internet radio and web control (from internet-connected devices). Crucially, the special edition N10 also benefits from a capacity upgrade, from 3TB to a 5TB HDD.

“Melco’s founder Makoto Maki is unfortunately no longer with us, but I believe he would have really loved the N10 45th Anniversary Limited Edition,” said Melco’s General Manager, Dan Raggett.

“It brings back the nostalgia of ‘70s Japanese hi-fi with its colour and looks. With great aesthetics combined with fantastic sound quality, the N10 45th Anniversary Limited Edition really is a stand out product. The team in Japan have worked really hard to realise this product in what has been a truly challenging year. Those 50 music lovers lucky enough to get their hands on one, will own a lovely piece of Melco history.”

The half-width N10 has been designed to offer better audio performance than the full-width N1Z series, while offering a highly convenient form factor. Housed in two units, each 215mm wide, the N10 comprises a head unit, with all the processing electronics and the data connectivity, plus a power unit, containing a low-noise linear power supply and power management. Separating the units allows total isolation from noise pollution, as well as isolating vibration from the power transformer.

The power supply uses advanced techniques to minimise both internal noise and also external noise which might affect the main hi-fi system. It features an IEC 3 wire mains supply with a properly defined ground reference point. Connectivity between the power unit and the head unit is by a flexible cord with Neutrik multi-pin connectors.

The N10 uses the same extreme low-noise, high-precision digital music dataflow as the wider Melco EX Series and has been designed from the ground up as an audio-specific device: it uses no standard IT components or PC parts.

Twin Ethernet ports are retained, with the dedicated Ethernet Player port connecting directly to the network player without an intervening data switch, ensuring that packet order and timing is maintained.

Internal storage is a 5TB HDD, easily expandable by either a USB HDD or for best results, the dedicated Melco E100 expansion drive. Data rates up to 32-bit/384 kHz and Octo DSD are supported, as well as gapless and markerless DSD.

Compatible with USB DACs, control is either via the Melco app, from the front panel, or from an approved third-party RF Remote handset. The N10 will operate with both USB DACs and Ethernet-connected players, even without connection to a data network in standalone Isolated Mode.

CD importing is designed to be easy with either the Melco D100 external CD loader, or an IT-grade optical drive for less demanding use. Melco does not put an IT-grade loader inside the N10 as it both compromises sound quality and also reduces reliability, due to the disposable nature of IT drives. Music backup is as easy and plugging in a USB HDD and pressing a single button.

Direct download of Hi-Res files from HighresAudio.com and other vendors is supported for error-free downloading. A front panel USB socket is specified for convenient importing from USB devices, direct play without importing and for the connection of a USB DAC.

The N10 45th Anniversary Limited Edition will be available from October 26 for £7,499. The manufacturer’s UK distributor is Audiophile Digital Music Masters (ADMM).