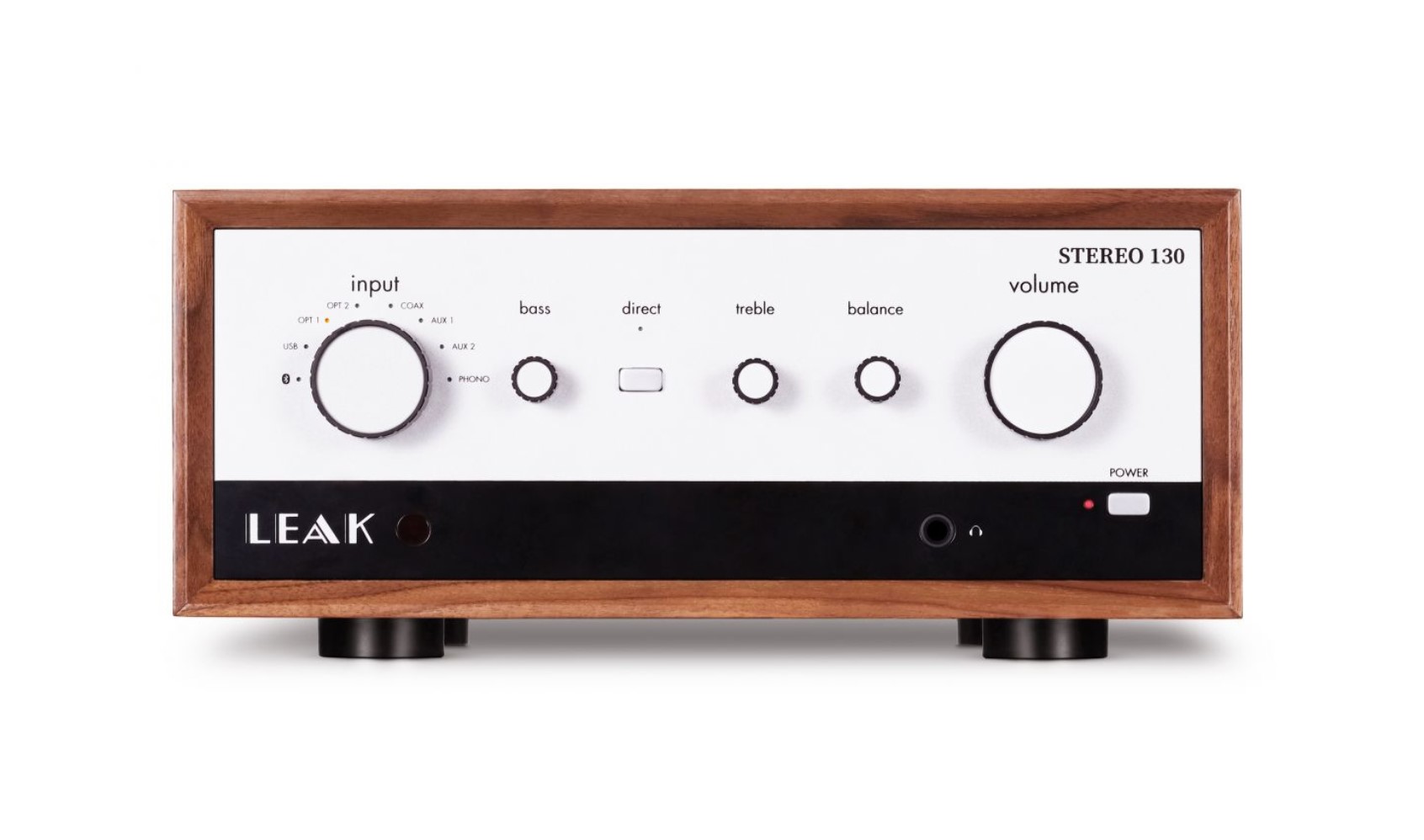 British audio brand, LEAK has returned with its first products for more than 40 years. The new LEAK Stereo 130 is an integrated amplifier featuring state-of-the-art circuitry nestling within a classic LEAK exterior, while the LEAK CDT is a matching CD transport.

Founded in 1934, LEAK was responsible for many technological ‘firsts’ throughout the 1940s, ’50s and ’60s. For example, the Point One series of valve amplifiers introduced in 1945 were the first to reduce total harmonic distortion to 0.1 per cent, while its Sandwich speakers heralded true-piston cone action by sandwiching polystyrene foam between outer skins of stiff aluminium foil.

The all-new Stereo 130 is a descendant of another LEAK classic, the Stereo 30 integrated amplifier, which arrived in 1963 as the first commercially available all-transistor amplifier. It spearheaded the use of transformerless transistor output stages over then-standard transformer-coupled designs, paving the way for future solid-state amps.

The Stereo 130 is destined to form the beating heart of many a high-performance, multi-format audio system – ready to deliver vinyl, CD, Bluetooth-streamed and USB-stored music, through all manner of speakers and headphones.

The Stereo 130 also recognises the convenience of streaming music from a phone, tablet or music player over aptX Bluetooth.  At its core is a Class AB power amp that draws on many decades of amplifier design experience. A 200VA toroidal transformer is followed by 2x15000uF reservoir capacity, helping the amp to maintain control of the music whilst enabling dynamic range.

Headphone users are well catered for thanks to a dedicated amp stage with current-feedback circuitry, its gain bandwidth and high slew rate.

The ES9018K2M Sabre32 Reference DAC chip handles digital-to-analogue conversion, complemented by specially devised circuitry including op-amps selected for their synergy with the ES9018.

The layout of the Stereo 130’s digital and analogue circuits has been carefully applied, with independent power supplies feeding all critical stages. Bass and treble tone controls – a feature passed down from the original Stereo 30 – enable sound to be tailored to suit the varying characteristics of different analogue and digital sources.

If preferred, these tone controls may be bypassed to deliver the shortest possible signal path to the precision analogue volume stage, which is controlled by a motorised ALPS potentiometer.

The Stereo 130’s adaptability makes it a suitable partner for all manner of contemporary loudspeakers – not least the Linton and Denton Heritage speakers from LEAK’s sister-company Wharfedale, with which it shares a classic 1960s-inspired design and walnut wood veneer.

For the many people for whom CD remains a crucial part of their musical diet, the LEAK CDT is the Stereo 130’s ideal CD-playing companion. The LEAK CDT is a dedicated CD transport incorporating the same slot-loading mechanism as the CD players and transports made by another of LEAK’s sister-companies, Audiolab. It uses a read-ahead digital buffer to reduce disc-reading failures, able to play scratched and damaged CDs that are unreadable by conventional mechanisms.

The master clock is controlled by a temperature-compensated crystal oscillator, enabling the digital output from both coaxial and optical sockets to exhibit vanishingly low levels of jitter (digital distortion). In addition, the coaxial output is fed from a differential line driver to ensure the digital signal reaches the accompanying DAC.

As well as spinning CDs, the LEAK CDT features a front-mounted USB input, enabling playback from USB storage devices. FAT16 and FAT32 formatted devices are supported, and WAV, AAC, WMA and MP3 files can be played, with file navigation available via the front panel controls and remote handset.

The LEAK Stereo 130 is available with or without a real-wood walnut enclosure, at an RRP of £799 and £699 respectively, while the LEAK CDT is priced at £549 with and £449 without its optional wood enclosure. Both are available from August.