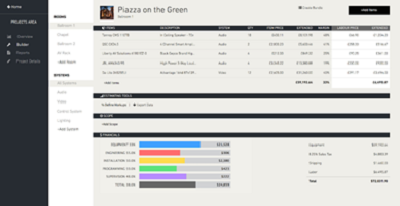 JetBuilt’s AV estimating software has now been released internationally, following a successful launch in the US in June 2015.

The web-based software works on a variety of equipment installers will likely have access to; including Mac OS X and Windows.

Installers looking to create a proposal for clients can use the technology no matter where they are located with this new international version; whether those installers are in the UK, Europe, Africa, Asia, South America or Canada.

JetBuilt has overhauled the software for use in international markets; with local currency options, default tax rates by country and the ability to label the tax fields all new features.

The company has also used British English rather than Americanisms which are currently in-use on the US-version of the App.

While JetBuilt’s current customer base is small in comparison to its US dealers, the company is hoping to grow that number from the current 25%.

This tool is the first step towards achieving that goal; allowing integrators to spec up project on the fly.

The Jetbuilt AV proposal software includes a large database of products that are updated by the Jetbuilt team as manufacturers release new products.

Integrated dealer pricing is managed via manufacturer authentication, by directly adding prices to a project, or uploading price sheets to Jetbuilt for free data entry to the dealer account.

Integrators can include their own labour and design rates which the software then recalls for subsequent proposals.

Users can bundle their go-to systems and packages and drop them into future projects with one step.

“Part of our ethos is listening to our customers and giving them the tools they need to make their jobs easier. Our dealers are now spending 15 minutes to create a proposal that used to take three to four hours,” says Paul Dexter, founder and designer of Jetbuilt.

“Our users receive free updates every single week based on dealer input. The international version of the software is an evolution that our dealers requested. Jetbuilt’s mission is for dealers to spend less time building proposals and more time making money.”