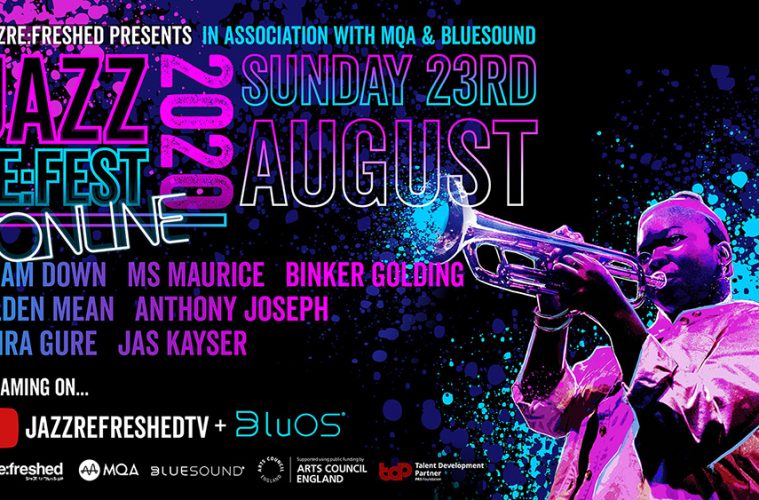 Renowned music and arts organisation, JAZZ RE:FRESHED, will bring its annual festival JAZZ RE:FEST online this year as part of a digital strategy to keep UK jazz thriving while venues are closed, whilst continuing to support musicians whose performance opportunities have dwindled as a result of the global pandemic.

Brought to you in association with MQA and Bluesound, JAZZ RE:FEST 2020 will be taking place between 5-9pm BST on Sunday 23rd August. The virtual showcase, held at The Mill studios behind closed doors, will be streamed on the Jazz re:freshed YouTube channel. The performances will also be broadcast, at the same time, in MQA studio-quality audio via Bluesound’s BluOS Controller app directly into the homes of Bluesound’s hi-res speaker owners.

JAZZ RE:FEST is an annual one-day festival produced by JAZZ RE:FRESHED, celebrating jazz and jazz-inspired music and culture. Usually hosted at Brighton Dome, the festival was recently cancelled due to COVID-19 related venue closures and will now take place behind closed doors at The Mill studios in London. As a not-for-profit organisation, Jazz re:freshed will be encouraging donations on its YouTube channel from festival viewers. Adam Moses, co-founder of Jazz re:freshed, says, “Despite barriers, we are still on a mission to celebrate a genre and musicians whose performance opportunities are severely reduced right now, and to showcase the incredibly diverse, colourful, expressive and creative world of jazz music and alternative culture.

“The festival has been the perfect launchpad for pioneering artists such as Moses Boyd and SEED Ensemble,and it’s great to return with a mix of fresh talent and established acts, and with the support of MQA and Bluesound to deliver the performances remotely in studio-quality resolution.”

Mike Jbara, MQA CEO, adds, “MQA is committed to helping artists connect with fans by allowing them to hear the full musical performance, as if they were there. The performers showcased at Jazz re:freshed events are brimming with originality and energy, and their artistry is fully revealed in this way. We are proud to be a small part of the events imagined by Jazz re:freshed.”

Gord Simmonds, CEO and President of Lenbrook International, parent company of Bluesound and BluOS, adds, “We are very pleased to be able to support this unique event as it demonstrates the power of BluOS platform as more than just a hi-res multiroom audio distribution system that happens to be inside a growing number of high-end audio brands. The ability to stream a music festival, in studio and life-like quality, directly into many thousands of users’ living rooms around the world is an extraordinary way for artists to connect with their fans, and for the fans to be able to enjoy live performances again.”

The full festival will be streamed live from 5-9pm on Sunday 23rd August via youtube.com/jazzrefreshedtv in MQA audio to Bluesound speaker owners and BluOSEnabled devices.