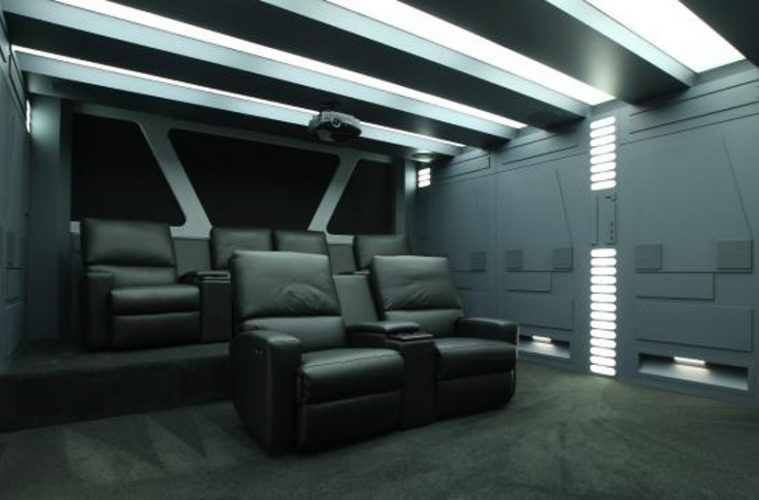 This Star Wars fan in Herne Hill, Perth, Australia had his home cinema made to look like the inside of the Death Star.

The themed cinema boasts full surround sound and a 100-inch screen, and the property was recently used as the main location in a feature film which will premiere at the Melbourne International Film Festival this year.

“Sitting there you feel you are in the Star Wars set; it transforms you completely to this other place,” the owners told Perth Now.

“There is no natural light in the room and it’s built to scale of the movie set.”

Super-fans Vic Wertz and Lisa Stevens pay homage to their dark lord and master each and every day, via this incredibly impressive and geeky home theater. The two actually hired Doug Chiang, the lead designer on Star Wars: Episode I – The Phantom Menace and Star Wars: Episode II – Attack of the Clones, to design the room, and really, it blows the real Death Star away.

Like most Star Wars instalments, these theatres take time.

Orren Pickell Building took about two years to create the above sci-fi specimen for fans located in Mettawa, Illinois.

It basically has more secrets than Skywalker Ranch, but we do know that F1 Audio, the project’s designer and installer, packed the room with leather seating for 12, 7.1 surround sound, a CineWide screen, and of course, a killer Star Wars theme.

Laugh it up, fuzzball. This may look like a strange place to relax, but most Star Wars fans would be frothing over this dream room.

Everything comes together via Crestron, which runs throughout the rest of the house as well.

Acoustic Innovations of Boca Raton, FL, added in the life-size R2-D2 and C-3P0, the fiber-optic starfield on the ceiling, and the acoustical paneling that looks an awful lot like a spaceship.

Any true Star Wars fan might also want to check out these Star Wars Sky remotes, which are available now.