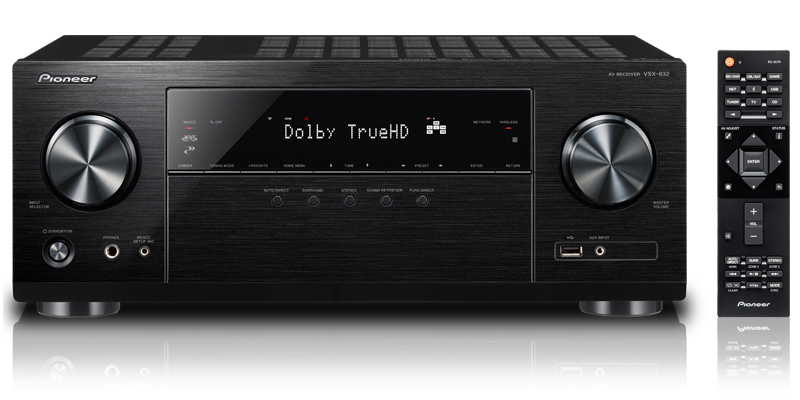 Following on from the launch of Onkyo’s TX-NR676E mid-range AV receiver, Pioneer is also launching a wallet-friendly network AVR with support for Dolby Atmos, Dolby Vision and DTS:X.

It’s no surprise to see Pioneer launching an AVR very similar to the one recently launched by Onkyo, after all the two are part of the same group. Unlike Onkyo’s model, however, Pioneer’s latest efforts will be even more affordable, yet still boast flagship-level specs.

Those opting to purchase a Pioneer VSX-832 will find support for standard 5.1-channel audio straight out of the box, with Dolby Atmos and DTS:X 3D-based audio formats set to be added at a later stage through a firmware update. Pioneer says that is currently scheduled to land later this summer, although couldn’t firmly commit to a date.

It’s not just audio formats either, with the VSX-832 also vying for a place at the centre of a multi-room audio system. To fit that role, Pioneer has equipped its latest AVR with DTS Play-Fi, FireConnect, Wi-Fi, AirPlay and Bluetooth. Streaming services such as Spotify, Pandora, Deezer and Tidal are also supported out of the box.

The VSX-832 will be an easy sale for consumers looking for an affordable AVR packed with flagship level specs. That’s because not only does it support all the audio features one could want, all except Auro 3D, it also boasts 4K Ultra HD and High Dynamic Range (HDR) passthrough. That won’t be any old HDR either, with the VSX-832 also offering support for Dolby Vision, a first for Pioneer.

There’s no word on a UK release date just yet, although pricing in the US has been confirmed at $500. That is a slightly lower price than Onkyo’s equivalent model.

If that’s still too rich for some clients, then Onkyo does have a model that’s been stripped of all the bells and whistles. Dubbed the VSX-532, this 5.1-channel network AVR lacks Dolby Atmos, DTS:X and Dolby Vision, but it does still support the HDR10 standard, as well as 4K Ultra HD video. It retains Bluetooth functionality too.

Again, UK availability has yet to be revealed, although US pricing has been set at $380.