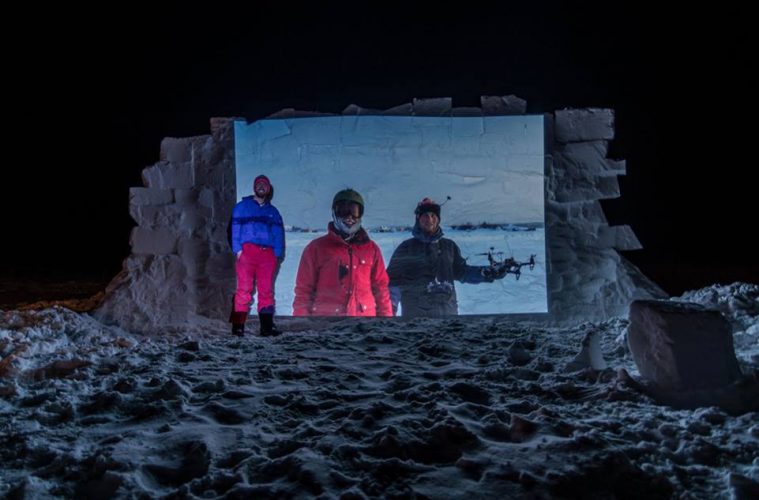 Graham Whatmough, based in Alberta, Canada recently spent eight days almost singlehandedly building a home cinema out of snow and ice, including a 20ft x 9ft screen and seats for customers.

“My area gets a really bad rep in the media just because of the oil industry, so as a photographer I’ve been really motivated to show the other side of this area,” Graham tells CE Pro Eu. “It’s beautiful here and it really goes under the radar.”

In fact, at the end of 2015 Alberta’s NDP government imposed an economy-wide carbon tax due to start in 2017, including a cap on emissions from the oil sands in a sweeping plan aimed at showing how serious it is about fighting climate change.

“I really like being outdoors in the snow and I love projectors and how you can put an image onto any surface with them,” he says. “Ever since I built my own projector and researched how to make a good screen I’ve been thinking about it. I figured the ice crystals in snow would make a great high-gain projector screen.”

Rounding up a few friends to help him out in the initial stages, Graham says most of the credit comes down to him and his shovel. Living in Northern Canada with very dry snow, Graham set his sights on a local park near his home as the base for the cinema location.

“The snow is really dry, it doesn’t want to stick together,” he laughs. “There was only a few inches of snow on the ground so I really had to go far to collect it. I piled it all up and then I compacted it as much as I could with snowshoes. I had to let it sit for a few hours and then compact it again. After about a day the pile was hard enough to cut blocks out of with a hand saw.”

Graham used an inverter-type generator to power his electronics. “I have a laptop, my prosumer level projector and speakers set up on a table. You need to think about how you will power and protect your electronics. I have a power inverter in my truck so I am able to set up anywhere I want. I made sure to choose a location protected from the wind, but there also needs to be somewhere to protect and power the projector.”

No screen was installed; it was made entirely of snow. “I’m using a Viewsonic Pro8100 projector,” he explains. “It’s a 3-LCD projector with lens-shift. It’s eight years old but the 1080p still looks great even at 300”. My speakers are the ones I use for my computer; a Logitech Z5500 digital PC multimedia home theatre speaker system. They put out some amazing sound, very good clear highs and amazing bass when you want it. They are amazing value for the money; I’ve had them for over 10 years now.

“I am pretty hard on my gear,” he admits. “None of the electronics I used were designed to be outside, let alone in the snow! They actually get a considerable amount of condensation on them during warm-up and cool down periods.”

Graham admits that although it was a lot of work to build the movie theatre, he found it to be lots of fun, too. “The weather is the biggest hurdle,” he reflects. “It’s been an unseasonably warm winter so the theatre actually has taken a beating.”

Unfortunately, a week of warmer weather finally destroyed the snow theatre, but Graham is already planning his next one: a snow drive-in.

“I got such a good response from it I have applied for city permits to build one with vehicle access so I can run it like a drive-in theatre,” he enthuses.

Although he didn’t charge for screenings, he will do so in future. “I’ve applied for city permits and insurance. I’ve worked out rights with Disney Pixar and Sherpa Films to screen some of their films, plus I will also be showing some of my own films.

“I’ve asked a local radio station, Rock 97.9, to bring their radio transmitter so people will be able to listen to the movie in the cars like at any other drive-in theatre. I will operate this as long as weather allows and as long as there’s interest!”

Software engineer Hemant Naidu hates going to the cinema, so he built his own in his basement

Rare Vintage Mobile Cinema Up For Sale In UK