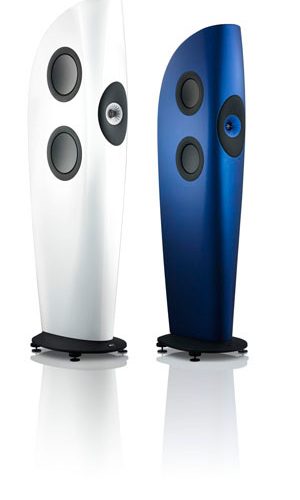 Following the positive response to Blade, which was released as part of KEF’s 50th Anniversary, KEF engineers were given the task of increasing the Blade range, so customers could have further choice and flexibility.

Like the original Blade, Blade Two is based on the advanced materials and innovative technologies developed to replicate the performance of the original prototype Concept Blade and the same method of forming the attractive cabinets.

The drivers on both models share the enhancements responsible for the Blade’s notable acoustics.

Available in five specially selected finishes chosen to complement Blade’s sculptural contours, Blade Two is both smaller in height and depth than Blade.

Its size has been configured to retain the integrity of the iconic visual design and the acoustic prowess, yet on a practical level provides greater ease of positioning and placement within smaller environments where space is at a premium and where Blade’s extreme bass extension would be superfluous.

At the heart of KEF Blade Two is the company’s Single Apparent Source technology, described as a perfect extension of the latest, fully pistonic KEF Uni-Q MF/HF array, which brings the bass drivers into the picture for the first time.

The design looks to combine all elements to form a seamless point source driver array handling the entire frequency range.

Four powerful 6.5in (165mm), newly developed bass drivers deliver the KEF Blade’s distortion-free low frequency response. KEF says the engineering principle behind their configuration is simple – let the forces of each moving cone cancel each other out by arranging them in opposed, symmetrical pairs.

They are side firing so their acoustic centre coincides with those of the new Uni-Q midrange driver and tweeter. KEF says that the result is that the entire frequency range is radiated from one point in space.

All this technology is housed within a rigid and heavy cabinet made from ultra-high density polyurethane.