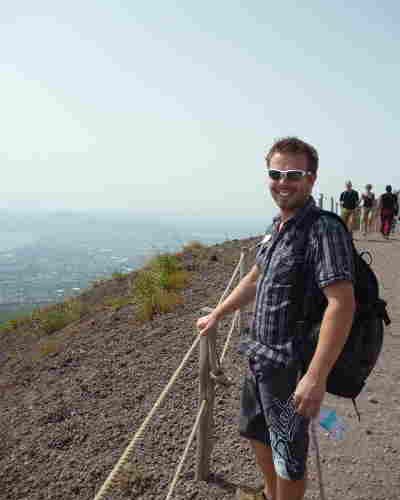 What are you up to today?

Today I am starting a new project. A client is having an extension built, so we are upgrading and relocating their equipment. In addition, we are adding a small 7.2 home cinema.

How and why did you pursue a career in the AV/Install industry?

When I left school I trained to be an electrician, but was unable to find a company to take me on to finish my NVQ level 3 as I could not drive. So I went travelling in Australia and while I was away a friend contacted me saying that they had started their own AV company. He asked would I be interested in giving him a hand when I got back.

That was over 10 years ago now and I think that becoming an AV installer has given me a far more opportunities than just being an electrician.

What project are you most proud of in your career and why?

Installing the AV systems on Palmer Johnson super yachts has to be up there. The yachts had one off AV systems designed for them, some had cinemas installed on the sun deck which was a pretty cool feature.

“I see a lot of installations that are installed badly and poorly, most of the time the customer has paid a lot of money for something that was never going to work”

In fact, while we were carrying out final testing in the marina we managed to draw quite a crowd viewing from the dockside. That was a pretty fun night on testing/just watching films.

What is the worst thing (outside of your control) that has ever gone wrong on a project?

A customer’s bath overflowed and flooded into the media room below, it caused a lot of damage and we had to replace most of the equipment.

As an installer, what is one thing you’re tired of hearing either on the job, or about your job?

There are the usual jeers whenever you bring a TV screen onto site: “that would look good on my wall” and “can you put that into the back of my van?”

The worst of all are the builders who have not been involved in many AV installations. They find it hard to understand that the AV trade need to enter finished rooms to install certain equipment.

What one thing could the industry collectively do to improve its standing and profitability?

I see a lot of installations that are installed badly and poorly, most of the time the customer has paid a lot of money for something that was never going to work. I feel that the AV industry would benefit from becoming regulated.

CEDIA is trying to do this but is finding it hard to get the recognition. It would help customers have confidence in who they are spending their money with and reduce the amount of inexperienced installers giving the industry a bad name.

What is your favourite piece of AV kit on the market right now?

I would have to say the Crestron SWAMP and SWAMP-E. I used to find it so frustrating making all of the interconnects in between amps.

“The worst of all are the builders who have not been involved in many AV installations. They find it hard to understand that the AV trade need to enter finished rooms to install certain equipment”

With the SWAMP and the SWAMP-E it’s all done with a single shield CAT5e cable. It saves a lot of time and means that my rack builds look less cluttered and more professional.

What product/s or concepts do you think will be the next big thing will be in the industry?

I am looking forward to see how 4k is going to change the industry and to see how well it takes off with consumers. I have been in the industry for over 10 years now and have seen a lot of changes, but I think that 4k will bring more interesting products.

What was your first ever job?

My first job was working for a Crestron programmer. I had to fix any issues or problems that were found with an installation. This helped to improve my fault-finding skills.

Best reaction from a client?

I have made a customer’s wife cry! It was tears of joy. We had inherited a job that had been started by a customer’s friend. Nothing was working and we had to completely overhaul the whole system.

Once we had finished and were showing the customer and his wife how to use the new system, she couldn’t believe what a difference that we had made and was really happy with the end system.

What’s the best thing about life as an installer?

I enjoy working on cinema projects. The challenge of turning a customer’s thoughts and ideas into reality.

Also it’s pretty good getting to test the cinema before you hand over the working system. I’ve seen a lot of parts of films!

It has to be not having all of the equipment/parts at the start of the job. There is nothing worse than starting a job that you cannot finish because you are waiting on parts.

You can invite three people living or dead out for a pint or over for dinner (not including family and friends!) Who are they and why?

First would be Sir Ben Ainslie, he grow up in my home town of Lymington and I think he would have a great deal of sailing knowledge he could pass on to me.

Second would be Chris Froome. I’m quite a keen cyclist and I thought it was great when he won the 100th Tour De France.

Third would be Jeremy Clarkson. I’m a big Top Gear fan and it would be good to ask him, who is the Stig?

You can only listen to one album and watch one film for the rest of your life, what are they?

It would be AC/DC Back In Black and the film would be Hot Fuzz or The Dark Knight.

“I have made a customer’s wife cry! – Tears of joy”

During an upgrade I find it frustrating to have to get the system back up and running for the customer over night. Then undo it all again the next day so that I can carry on with the installation.

Do you have any hidden talents?

I’m part of a sailing racing crew. We race 40 foot yachts. I am normally the guy right at the front of the boat on the fore deck that has to sort out the spinnaker.

I guess that’s a sort of talent, not falling over board while standing up with both arms above your head trying to jibe the spinnaker.

Who else took our Q&A?

What did this installer do when a pole-mounted distribution transformer fell into a brook on the job?