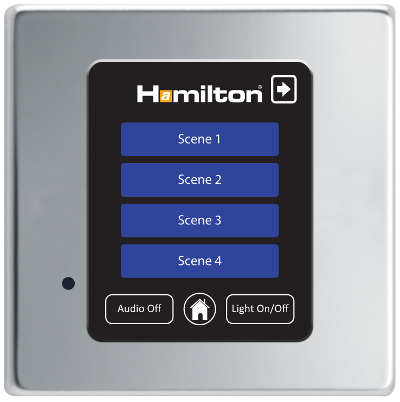 Taking place at ExCeL, London from November 19th-20th 2014, visitors will have the opportunity to experience Hamilton’s complete range of lighting control and multi-room audio solutions, as well as preview the company’s range of decorative wall plate designs and finishes.

New at the show this year will be Hamilton’s LEDstat – an intelligent LED dimming device that has already been announced as a finalist in the LUX Awards in the category of ‘Controls Innovation of the Year’ and shortlisted for an Electrical Industry Award.

Developed to resolve compatibility issues between LEDs and the dimmer, it monitors and programmes itself for best performance when used with the same or mixed branded LEDs.

Meanwhile, visitors will be able to see how Hamilton’s Mercury Lighting Control enables multiple scene-setting programmes to be set, stored and recalled.

The encased dimmer hub is straightforward to access and wire in, plus the installer programmer software allows total flexibility when commissioning the system to client’s requirements.

The programmable wall-mounted controllers are available as ‘Capacitive touch controllers’ and ‘Mechanical button controllers’ in an array of styles and finishes.

A new Touchscreen will also be showcased, which fits into a British standard single wall box. Control options include infrared remote control and wireless control via iPod and iPhone using a downloadable app, while the system integrates with the Mercury Multi-room Audio system for an entire lighting and sound package.

“Simplicity has been at the forefront of the system’s design.“explains Ian Hamilton, managing director of Hamilton Litestat.

‘With the installer in mind we have ensured that installation is not restricted by a need for specialist knowledge: everything in the configuration software and all cable connections and terminals inside the control box will look familiar. We have gone to great lengths to retain the aesthetics of the product on the wall while making sure it’s very easy to operate by the end user who can simply set up their personal scenes from the wall plate at the touch of a button.”