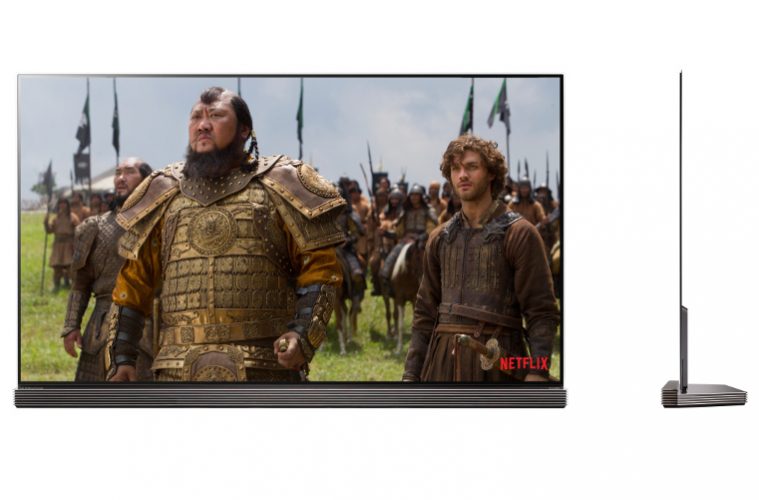 Dolby Laboratories, Inc. and LG Electronics have announced that the LG2016 OLED TVs and the company’s flagship Super UHD TVs will feature Dolby Vision technology, meaning that consumers will have access to UHD Dolby Vision mastered content via a number of digital retailers, as well as Netflix.

As a complement to both HD and 4K, what Dolby Vision does is combine high dynamic range (HDR) and a wide colour gamut, which the manufacturer states results in ‘astonishing images that, compared to standard pictures, deliver brighter highlights, more light-to-dark contrast and colours never before seen on TV’.

As it turns out, it’s more than you may at first think. Nearly 50 Hollywood films have been released in Dolby Vision in the cinema and in the home combined thus far, including the recent The Hunger Games: Mockingjay, Part 2.

Not to miss a trick, Netflix will utilise Dolby Vision in order to deliver compelling viewing experiences for select Netflix titles, starting with Marco Polo, with plans to eventually offer the Marvel series as well.

“With Dolby Vision, we’re finally able to push the limits of contrast ratios and colour gamut while redefining the picture quality of LG TVs,” states Brian Kwon, executive vice president and CEO, LG Home Entertainment Company. “We’re equally proud to be the first manufacturer to make high-dynamic-range television available at a variety of prices through our premium LCD TV line-up.”

Kevin Yeaman, president and CEO, Dolby Laboratories adds that “Dolby Vision transforms the television experience and when people see it, they’re blown away. Through our partnership with LG, we’re able to expand the reach of this revolutionary technology to a global audience.”

“The combination of LG’s OLED screens and Dolby Vision enables Netflix to deliver the most exciting and visually stunning experience possible in homes today,” furthers Neil Hunt, chief product officer, Netflix. “We look forward to leveraging the potential of Dolby Vision across a growing number of titles over the coming years.”

Michael Bonner, executive vice president, digital distribution, Universal Pictures Home Entertainment, also added that the company “could not be more pleased to be working with Dolby to deliver to consumers the ability to watch Universal movies in the most spectacular format possible. Together, we are committed to ensuring that home entertainment consumers can enjoy the richest, most remarkable movie-watching experience yet with Dolby Vision.”

Meanwhile, US manufacturer TCL used CES to reveal its own Dolby Vision news: the company has announced a collaboration with Dolby Laboratories, Inc. to enable HDR performance in its new TCL 65in X1 4K Ultra HD TVs.

As part of TCL’s new QUHD family of products, TCL also announced that the 65in X1 is the first of the X1 series to be launched in the US market later this year.

With up to 1,000 nits peak brightness and 288 zones of direct-lit LED local dimming, the X1 series has been designed with the aim of providing an ‘unparalleled level of dynamic contrast’, in addition to precise control of light and dark for improved colour resolution and clarity.

“Dolby Vision is leading the market in HDR technology and, coupled with a wide selection of premium HDR streaming content, takes the X1 series to the next level of performance.”

“Our commitment has always been to revolutionise the way consumers experience content in the home, and with partners such as TCL, we are able to achieve that goal,” states Roland Vlaicu, vice president, consumer imaging, Dolby Laboratories.

Both TCL and Dolby are collaborating with major streaming service providers, including VUDU, to provide the new TVs with direct access to the latest HDR premium content from leading studios.

“VUDU is synonymous with a premium home entertainment experience and we are proud to offer content in 4K UHD with Dolby Vision HDR,” adds Amit Balan, head of marketing and merchandising, VUDU. “By collaborating with innovators like Dolby and TCL, we ensure we can continue delivering the best of home cinema to our customers.”

The new TCL X1 series with Dolby Vision will be available in the US in the second half of 2016.

The TCL 65in X1 4K Ultra HD TVs are not expected to arrive in the UK or Europe any time soon, making LG the first and only global manufacturing partner that has announced a Dolby Vision TV.