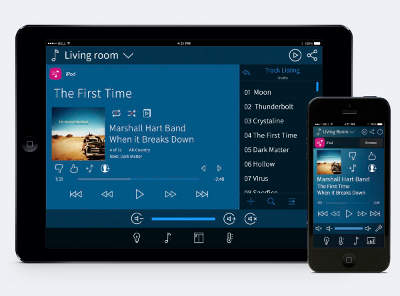 Crestron has released a slew of new features to its Pyng App, with the company adding functionality for setting up whole-home audio distribution systems and TSW touchscreens.

Crestron Pyng already allows for the fast deployment of lights and complete home automation, but the company is keen to expand the App’s offering in the face of competition from other companies.

The latest update to the App takes on the likes of Sonos and Bose, with the company now offering the ability to set up and control home audio in every room in the house.

With this update focused on audio systems, Crestron has included streaming media from some of the most popular services around, including Spotify, Deezer and Rhapsody. AirPlay is also supported.

With this update, Crestron has added support for the company’s multi-room audio systems, like the C2N-AMP-6X100 or the C2N-AMP-4X100.

While Crestron is focusing on home audio with this update, the company also added support for the Crestron TSW-552/752/1052 touchscreens.

Users wanting the functionality of the Pyng App on their Crestron touchscreens can now do so by connecting the screens to their home network.